Tokyo (SCCIJ) – The first SCCIJ online event of the new year put a spotlight on the main elements of the Suganomics doctrine. Dr. Hiromichi Shirakawa, Chief Economist of Credit Suisse Japan, explained in a webinar with more than 70 participants that the new prime minister Yoshihide Suga is focused on structural reforms instead of an expansive monetary policy to achieve sustainable growth. Full recording available here! 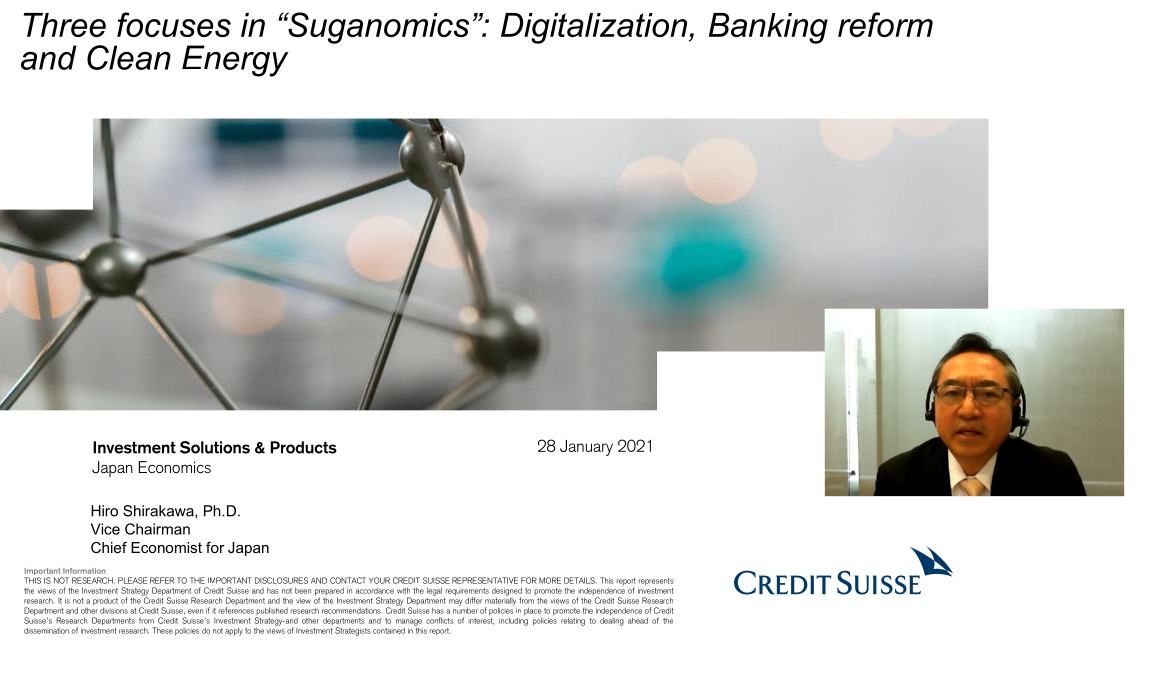 The speaker presented digitalization, banking reform, and clean energy as the three main fields of Suga’s economic policy. All of them would be aiming at increasing productivity. “This will definitely be an interesting year,” the speaker promised. SCCIJ January luncheons traditionally give an outlook on the year by an economist of a Swiss bank in Japan.

At the start of his talk, Dr. Shirakawa analyzed the political landscape. According to him, Japan may experience two elections in the fall within a short period – the Liberal Democratic Party will choose a new leader and the public will vote in a national parliamentary election. Whether Suga will continue to stay in power, would be difficult to predict, the speaker said, but it would not matter anyway. “We do not think that a different leader would change this new economic policy,” Dr. Shirakawa stated.

He continued by stating the difference between Suganomics and its predecessor Abenomics. Instead of printing money, weaken the currency and expand fiscal expenditure, Suga would be interested in reforms. His ideas would represent a new trend of thinking within the governing party LDP: “Due to the pandemic, the Bank of Japan is forced to support economic packages, but the core principle of Japan’s economic policy has shifted from reflation to reforms,” the speaker argued. Also, the Olympics may be held this summer because too much money has been spent already.

Next, the chief economist of Credit Suisse Japan judged the economic developments in the new year. In his view, the economy may grow slightly slower than 2% this year after it shrank by 5% in 2020. The Japanese yen may only appreciate gradually to not more than 100 yen per dollar, he predicted. Growth in 2021 would not be that high because Japanese households may remain cautious and not spend money aggressively, even if Covid-19 is under control. “Life expectancy continues to rise, many people save for retirement, that trend will not change much,” he stated.

Digitalization is one of the three main features of Suganomics, Dr. Shirakawa said. Japan would be behind in terms of digital infrastructure. The business school IMD has put Japan at #23 in a global ranking of digital competitiveness. With a new agency for digitalization in the cabinet office, Suga attempts to aggressively strengthen and improve the digital platforms in Japan. One aim would be to improve the data sharing between hospitals and the government, the speaker said. The pressure on mobile service providers to cut prices and the experiments of the Bank of Japan with a digital currency should be viewed within this context.

A second reform topic is regional banking. “We are going to see a consolidation in this sector,” the economist predicted. The government would like to make the system stronger via mergers, acquisitions, and new business ideas, such as putting retail stores within bank branches. Dr. Shirakawa pointed to energy reform as the third theme of the Suga administration. The share of fossil energy would need to go down to 50% or 55% by 2030. As a result, the share of nuclear as well as renewable energy has to rise, he explained. One option could be to promote clean energy with tax breaks and deregulation.

Dr. Shirakawa started his professional career at the Bank of Japan in 1983. He spent about 16 years at the Bank, mainly in charge of research and analysis of money and credit markets. He was a special assistant to the governor in 1997-1998 when the country was in the middle of a banking crisis. From 1991 to 1994, Dr. Shirakawa was a senior economist at the Organization for Economic Co-operation and Development (OECD), based in Paris. He holds a B.A. in Economics and a Ph.D. in Policy Studies.