Tokyo (SCCIJ) –The two speakers of this webinar with more than 40 participants, Mr. Dominique Ursprung, Lecturer at the Zurich University of Applied Sciences, and Professor Patrick Ziltener of the University of Zurich, explained the particular challenges in Swiss foreign trade policy posed by the dynamic development of the new “Mega Regionals” in the Asia-Pacific. One of their conclusions: Switzerland should consider joining the Comprehensive and Progressive Agreement for Trans-Pacific Partnership (CPTPP). Full recording available here! 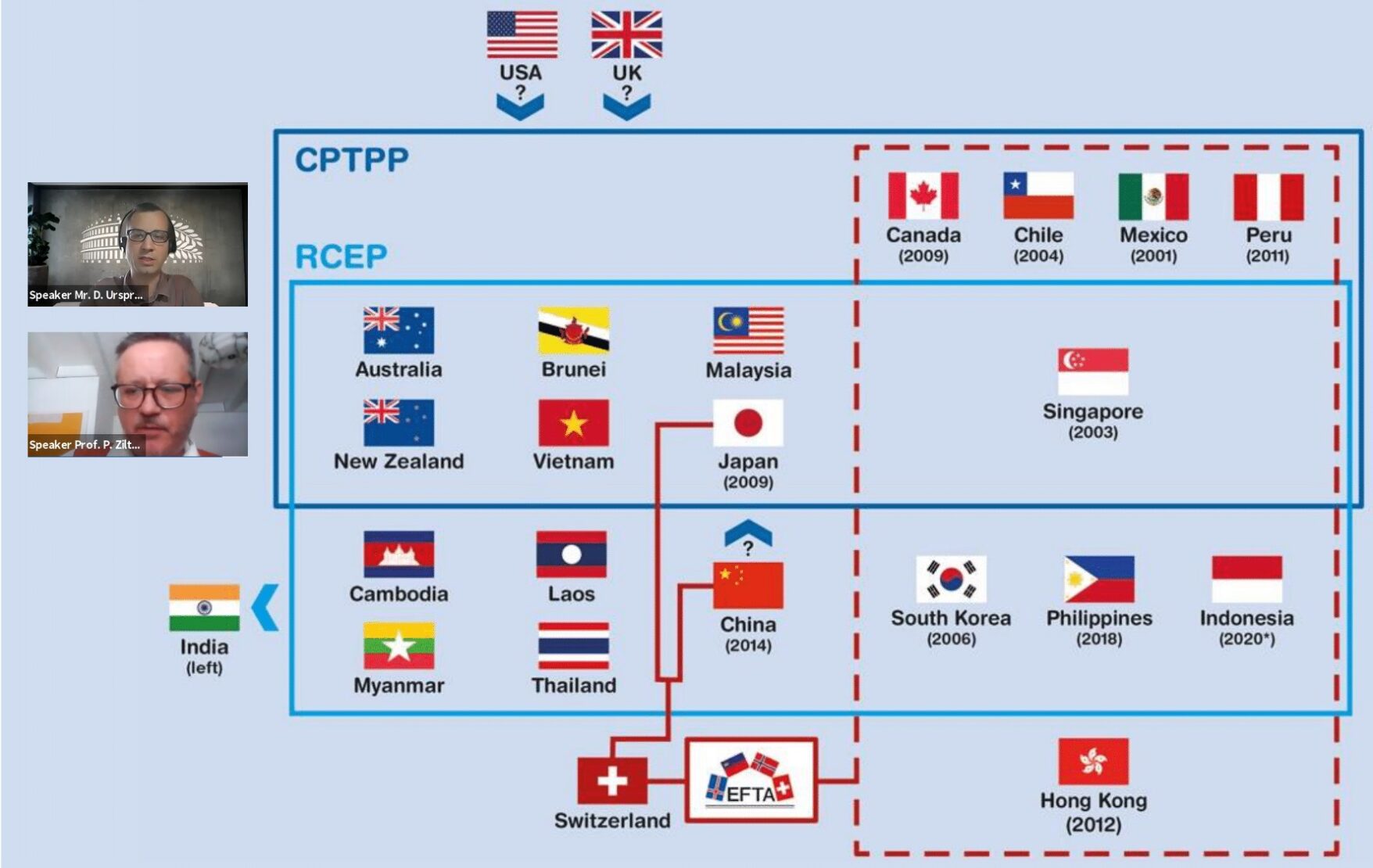 At the start, the two speakers compared the trade treaty network of Switzerland in Asia with the two recent trade treaties concluded in the region – the Regional Comprehensive Economic Partnership (RCEP), the world’s largest trade pact also including China, may enter into force this year, while the Japan-led CPTPP is already in force for two years.

Within Europe, Switzerland has been pioneering bilateral trade agreements with Asian countries, starting with Japan in 2009, followed by China in 2014. Soon, the Swiss will vote about an agreement with Indonesia. This network of free trade agreements is beneficial for Switzerland: In 2018, it saved import tariffs of CHF 1.8 billion and export tariffs of CHF 2.5 billion with preference utilization rates of 80 % and 73 % respectively, Mr. Ursprung said.

Next, Professor Ziltener pointed to the changing dynamics in trade policy. On the one hand, the Asia-Pacific region pursues economic integration with multi-country agreements. On the other hand, multilateral agreements are an attempt to disseminate economic rules. “This attempt of multilateralization should change our perspective,” Ziltener said. “Switzerland should be at the table, otherwise, we are on the menu,” he warned.

Agriculture not in danger

The speakers pointed to agriculture as a traditional impeding block for Switzerland’s foreign trade policy. But according to his analysis, the Trans-Pacific Partnership (TPP) and its successor CPTPP only feature a “rather modest” liberalization level in the agricultural realm. “This not about free trade, but higher quotas,” Ziltener stated and concluded that joining the CPTPP would not end Switzerland’s agricultural policy.

The accession process is open to any interested state or customs territory: “Every state which meets the standards is welcome to join the deal,” Ursprung said. “But the earlier you join, the better because the fewer states will come with demands you have to meet”. Ziltener mentioned that first movers have another advantage: If Switzerland joins before the U.S. returns to CPTPP, then Switzerland could demand concessions from the United States. “Consider this a kind of historic chance,” he said.

Besides, Switzerland continues its struggle to update the joint economic agreement with Japan. The new agreement between the European Union and Japan that came into force in early 2019 makes the situation even worse. Since then, Swiss cheese exporters have lost significant market share in Japan to competitors from the EU. But Japan shows no inclination to renegotiate or improve the bilateral agreement with Switzerland. “This means that if Switzerland cannot update the bilateral agreement, it better joins CPTPP”, Ursprung argued.

Biography of the speakers

Mr. Dominique Ursprung is a lecturer at the International Management Institute of the Zurich University of Applied Sciences (ZHAW). Since 2016 he manages the office of the Swiss-Japanese Chamber of Commerce (SJCC) and is the Secretary of the Parliamentary Group Switzerland-Japan.

Prof. Dr. Patrick Ziltener is a Professor of Sociology and Lecturer in Economic History at the University of Zurich and a University Counselor at the University of St. Gallen. He was responsible for bilateral economic relations with Japan and other East Asian countries at the State Secretariat for Economic Affairs (SECO) from 2006-09. His current research areas are regional and bilateral free trade agreements, globalization, and the Chinese Belt & Road Initiative.