Webinar: How baseball adapts to Covid-19

Tokyo (SCCIJ) – At this July webinar, speaker Mr. Miguel Pazcabrales, the Managing Director of the commercial arm of the world governing body of baseball and softball, discussed new ideas and strategies of his federation to cope with the impact of the Covid-19 global pandemic. By the means of such innovation, right holders, leagues, and sports property owners attempt to maintain the value of sports and its attractiveness for sponsors. 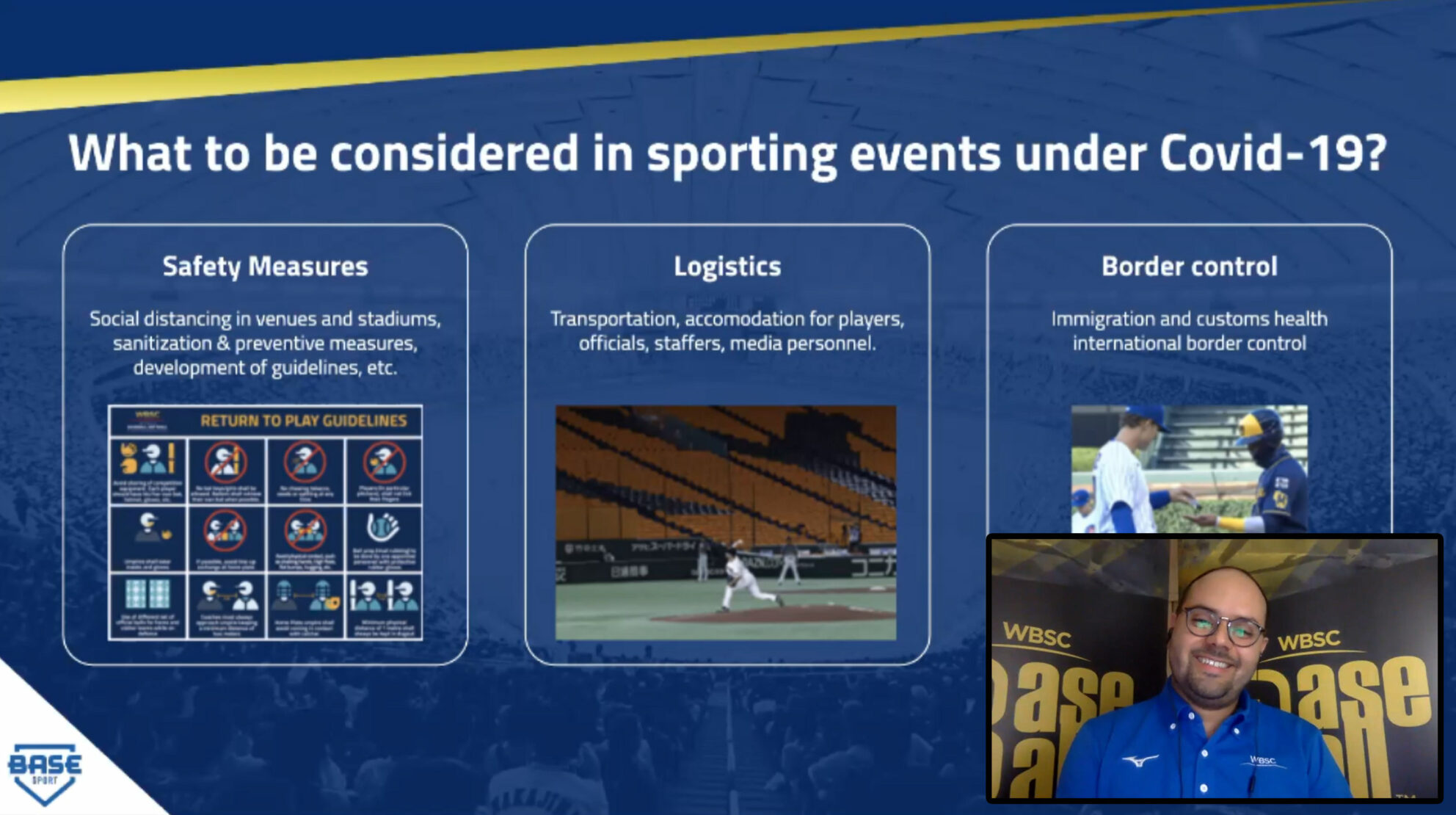 Mr. Pazcabrales joined the webinar from Florida at 11 pm local time whereas his audience of about 50 members and guests of the SCCIJ could enjoy his presentation at noon Japan Standard lunchtime. Mr. Pazcabrales discussed the impact of the pandemic on baseball and the reaction of the professional sports to a “new normal”.

In Japan, baseball is a national sport since the early 20th century. The first baseball game in Japan was played in 1878, the professional league was already established in the 1920s. In contrast, baseball in Switzerland is still a niche sport. Its governing body in Switzerland was only founded in the 1970s. Interestingly, the international federation for baseball and softball with the abbreviation ‘WBSC’ has its headquarters in the Olympic capital of Lausanne.

This organization has 208 national member federations in 141 countries. Despite its base being close to the International Olympic Committee, baseball was only Olympic sports from 1992 to 2008. In Tokyo 2020, postponed to next summer, baseball again will become an Olympic discipline, but not in Paris 2024, partly due to the absence of an appropriately sized stadium. “But we have hopes for Los Angeles 2028”, the webinar speaker said.

The WBSC President, Riccardo Fraccari, said that baseball and softball need to be at the heart of the global Covid-19 recovery. The WBSC has published many guidelines and recommendations to cope with the Corona contagion risk. “In our sports, a lot of adaption needs to be done because players share bats, balls, and helmets,” Mr. Pazcabrales said and identified several areas of sports business that are challenged by the new normal.

Media consumption: Sports receive a big part of their monetary revenue by awarding rights to TV networks, cable companies, and lately internet platforms allowing them to show their sporting events. “The pandemic experience will speed up the shift from TV to internet platforms,” the speaker predicted. He mentioned Youtube and pay-per-view platforms as examples. The advantage would be that consumers could watch sport with their devices.

Sponsorships: Not only are they a “huge” source of income for teams, leagues, and organizations, sponsors also have become part of the visual and historic imagery because they are communicating the value of sports like hopes, dreams, and fun. “But the sponsors will adapt,” voiced Mr. Pazcabrales his opinion. For example, at NBA baseball games in the U.S., a specific brand usually sells its beer to the spectators in the stands. Now, fans can order a beer delivery at their homes during the game to repeat this stadium experience.

Event production: At the very core of sports are events. Each game, each tournament, each set or match involves a large staff of people to make the event happen. “To save the event character, we recommend to enhance the fan closeness to the sport as much as possible,” the speaker said. For example, at some matches, cutouts of fans or screens with their pictures are creating the illusion of a packed stadium. “Also, there may be a fastened shift to virtual advertising”, Mr. Pazcabrales said.

Video Games (Esports): Very early in the history of video games, developers have made games that simulate traditional sports. So far, this been a niche within a certain age range. “But with the global pandemic, federations and teams have pushed quicker to engage with their fans and fostered playing videogames in the name of their teams,” the speaker told his webinar audience. More people bought a video game console and started to play with the younger generation. “This may become a whole new industry,” the speaker suggested. “But the challenge will be to bring such esports together with the traditional sport.”

Mr. Miguel Pazcabrales is the Managing Director of BASE International SA, the commercial arm of the WBSC (World Baseball Softball Confederation), the world governing body of baseball and softball. The purpose of BASE is the increase in the value of WBSC’s properties through diverse commercial assets from traditional sponsorships to digital engagement, including a brand new OTT platform. An Economics graduate from Florida International University and continued studies with a Master’s degree in Sports Business at the Johan Cruyff Institute in Barcelona, Miguel became part of Traffic Sports in 2013 eventually closing Scotiabank as the largest sponsor in CONCACAF history. Before WBSC, from 2015 to 2016 Miguel worked on establishing the partnership department of the newly formed Miami FC team owned by Riccardo Silva.