Tokyo (SCCIJ) – Swiss researchers and engineers are actively developing the hyperloop transport technology with the first complete test track in Europe, a new propulsion concept, and experimenting with pod designs. The Swiss Federal Institutes of Technology in Lausanne (EPFL) and Zurich (ETHZ) as the two top universities in Switzerland are the driving forces. 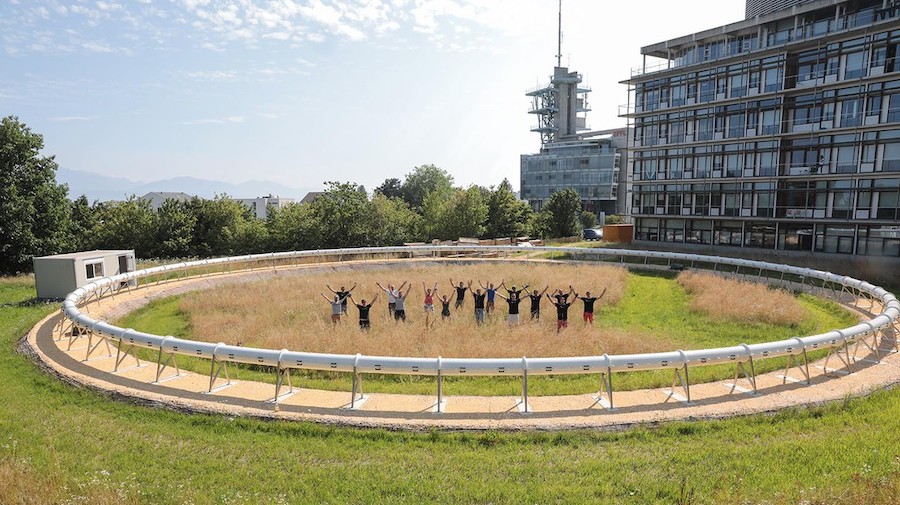 Engineers at EPFL’s Distributed Electrical Systems Laboratory (DESL), working in association with EPFL spin-off Swisspod, have built a hyperloop test track on the Lausanne campus. They will use the loop – a large vacuum tube for ultra-high-speed travel – to test a linear induction motor. An Innosuisse grant is funding the research.

“With this reduced-scale test track, we will be able to study the fundamental aspects of our pod’s electromagnetic propulsion and levitation system,” says DESL head Mario Paolone. “We’ll use the results to enhance the pod design and make the loop operate more efficiently.”

Hyperloops, viewed by some as the fifth mode of transport, may revolutionize long-distance travel. They offer a cleaner alternative to planes and are faster than trains. Hyperloop projects are already underway in the Nevada desert, Port of Hamburg, Toulouse, the Near East, and China.

Now, the team of engineers from EPFL and Swisspod has unveiled Europe’s first operational model Hyperloop. It will be used to study new ideas for the loop’s structure and pod and assess its viability for ultra-high-speed mass transportation.

The track is made out of aluminum alloy and designed to simulate an infinitely long Hyperloop, with pods of various sizes depending on the testing objectives and results. Its performance in terms of the propulsion and levitation system and kinematics will be tested under vacuum at a scale of 1:12 that eventually could go up to 1/6.

One of the big hyperloop challenges is the propulsion. To keep costs down, the required energy in the EPFL design will not come from the track – as it does for Maglev trains – but will be carried by the pods themselves. They will be equipped with linear induction motors, although further development work is needed to reduce the pods’ power consumption. 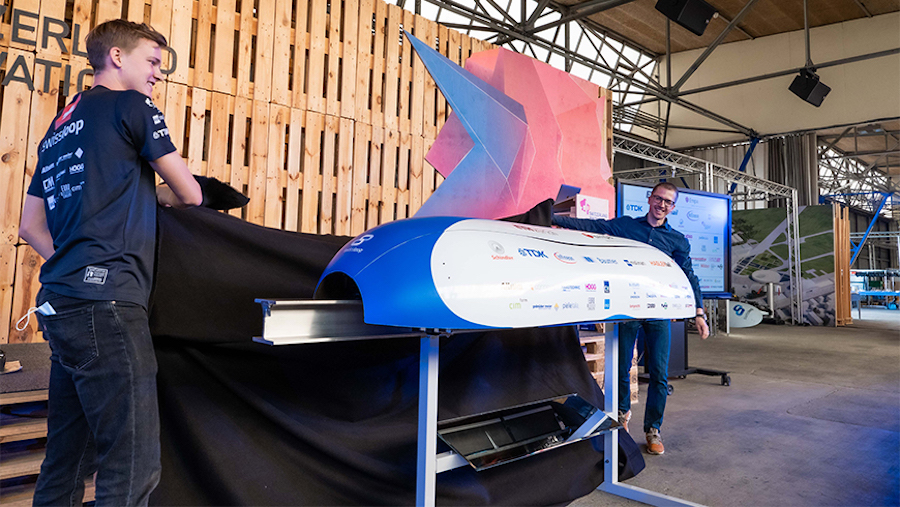 The brand new Swissloop pod at the ceremonial roll-out together (Photos: Swissloop).

Independently, Swissloop, a team of students at the Swiss Federal Technology Institute (ETH) in Zurich, had participated in 2019 in an annual competition of Tesla founder Elon Musk to develop high-speed vehicles – so-called pods – for travel in these low-pressure tubes. This year, together with three other teams, Swissloop launched the ‘European Hyperloop Week’ at the end of July in Valencia, Spain, to present their latest pod design (see picture).

“Through research on last year’s pod, we realized that driving on wheels is our biggest limitation once we reach a certain speed,” explains Yvan Bosshard, Operations Lead at Swissloop. As before, the Zurich team continues to rely on a linear induction motor. However, the motor is not only oriented forward but also upward. “This is how we create levitation,” says Bosshard. When the engine is started, the pod makes a small leap and then hovers a few millimeters above the aluminum track.

Since levitation causes numerous new challenges, speed has taken a back seat for the time being. “Speed will follow automatically when the hovering concept is fully developed,” says Bosshard. Sensor technology, in particular, now takes on greater importance. The control technology has also become more complex. The engine gets very hot due to levitation and will have to be actively cooled in the next prototype.

Text: SCCIJ with material of EPFL and Empa