Tokyo (SCCIJ) – Switzerland is following its own course to maintain the educational level of schools and universities without sacrificing the health of teachers and students. Currently, schools stay open with many students wearing masks, and most university students are distance learning via internet platforms. Some universities have answered the virus challenge by improving their offerings through collaboration. For example, the top schools IMD and ECAL have agreed to develop a design-focused program for executives. 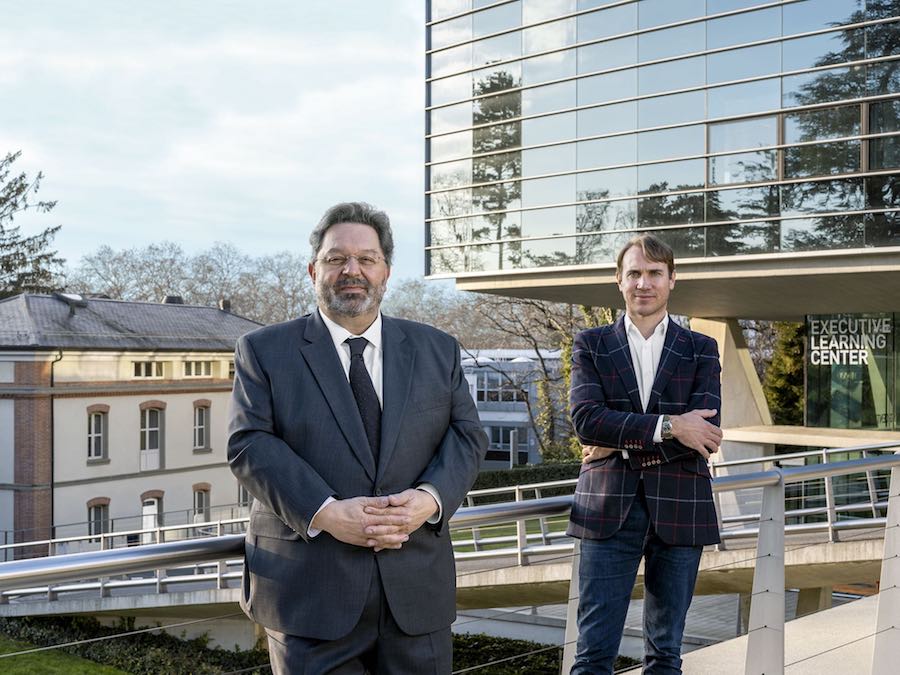 Jean-François Manzoni, IMD President, and Alexis Georgacopoulos, ECAL Director, announce the expansion of the partnership between the two institutions with the signature of an agreement and a new executive program (Source: ECAL/Jimmy Rachez).

No closures in the current wave

At the start of the pandemic in Switzerland in March 2020, the federal government took the unprecedented step of ordering the nationwide closure of all schools, although the cantons are in charge of educational matters. Swiss universities decided to switch to online teaching. After up to 13 weeks of effective closures in some form, primary schools went back to class teaching in May. Small numbers of older pupils came back in June, distance learning continued for many. Many universities re-opened.

In the fall, during the second infection wave, the government, cantons, teachers, and other experts spoke up against school closures. Hence, Swiss primary and lower and upper secondary schools continued face-to-face teaching. At the secondary level, masks in class became mandatory. Classrooms are aired regularly to avoid infections. Initially, many universities also taught their students on campus. Widespread cases of Covid-19 were relatively rare.

However, with rising infection numbers in October, several universities, including the University of Lucerne, the University of Geneva, and the Federal Technology Institute ETH Zurich returned to distance teaching. The University of Bern made the wearing of masks compulsory, lectures and tutorials went online. Finally, the federal government banned, with few exceptions, from November classroom courses at universities and other educational establishments.

The pandemic also caused some institutions to think about improving their educational quality through collaboration. One example for this assessment was provided by the business school IMD which continues some face-to-face programs and ECAL/University of Art and Design Lausanne, one of the world’s top design schools. They expanded their partnership with a memorandum of understanding to develop a new design-oriented executive program. The aim is to position both institutions for the interdisciplinary evolution of business and design in a rapidly-changing world.

ECAL and IMD will launch a multi-day program within IMD’s open programs portfolio. This new offering will explore the integration of design and its multiple facets within the business world. The course will target individuals and teams in mid-to-senior level management and equip them to leverage the power of design within their teams and organizations. The schools in the canton Vaud already work together on a range of activities such as IMD’s flagship Orchestrating Winning Performance Program. With the memorandum of understanding, they have committed to exploring new ways for cooperation.

Text: Martin Fritz for SCCIJ partly based on material of IMD/ECAL