Tokyo (SCCIJ) – After attending the opening ceremony of the Olympic Games, Swiss president Guy Parmelin met Japanese prime minister Yoshihide Suga on Friday. Their talks focused on the close cooperation between Switzerland and its second most important Asian trade partner in trade and research, as well as on global issues.

They also announced the opening of a new consulate in Osaka, which will also include a new Swissnex location. This is the sixth location of the Swiss network for education, research, and innovation. The President held additional meetings with IOC president Thomas Bach as well as experts on regional economic issues. 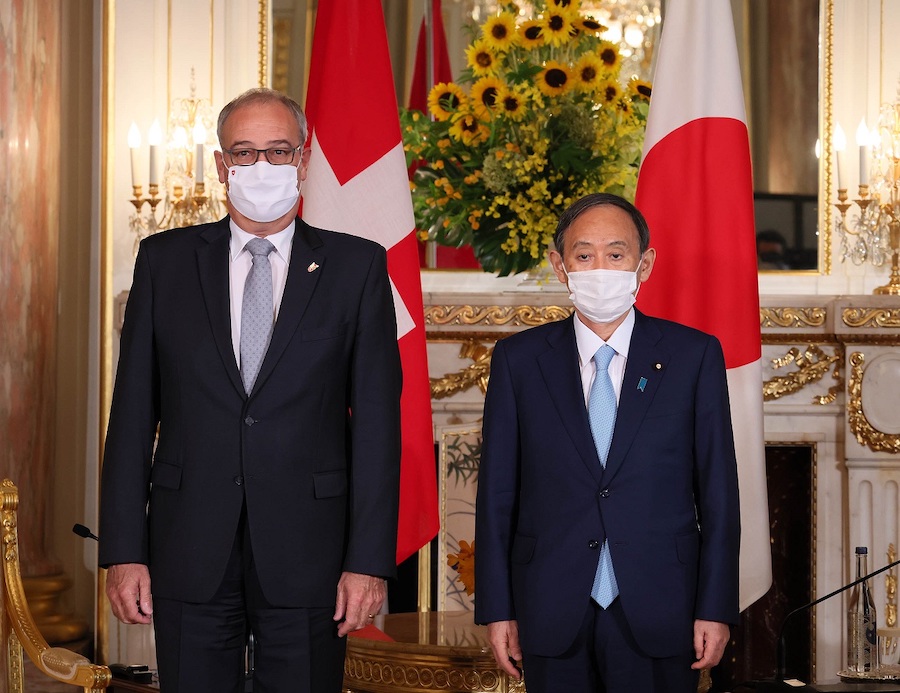 The Swiss president was forced to cancel meetings scheduled on Friday with Emperor Naruhito and the foreign minister Toshimitsu Motegi. Technical problems of the federal jet in Riga, Lettland, forced his delegation to buy tickets for a scheduled flight to Japan. Due to this delay, the president just made it in time to the opening ceremony of the Games. Around 110 athletes from Switzerland are taking part in the Summer Olympics.

In his discussions with Mr. Suga, Mr. Parmelin paid tribute to Japan’s commitment to the Olympic idea, to which Switzerland attaches great importance as the host country of the International Olympic Committee (IOC). Japan is a global priority country in Switzerland’s 2020–23 Foreign Policy Strategy, and relations between the two countries, while rich in tradition, remain dynamic, as both sides emphasized.

Switzerland has had a free trade agreement with Japan since 2009. The agreement is working well, but Switzerland believes that an update is required. Parmelin, who heads the economics ministry, emphasized this need, notably to improve market access for Switzerland, now that Japan has a trade deal with the European Union.

Prime Minister Suga indicated that he was open to considering the possibility of an update. After delays in talks due to the Covid-19 pandemic, technical discussions will now begin between the Alpine country and its second most important trade partner in Asia. After the meeting, Mr. Parmelin told journalists that economic ties were strong and relations excellent.

Japan and Switzerland also work together very closely on research issues. Japan is a priority country in Switzerland’s bilateral research cooperation. A new Consulate of Switzerland in Osaka was announced on Saturday at a hybrid event in Tokyo, marking a further expansion of Swissnex, the Swiss network for education, research, and innovation.

Due to open in the first half of 2022, this new Swissnex location will help to further promote projects between research institutions, universities, and start-ups in the two countries, as Mr. Parmelin explained. The office, which is set to begin operations in 2022, will help promote cooperation between researchers and start-ups in the two countries, according to the president.

Mr. Felix Moesner who served as CEO of Swissnex in Boston, New York and China and headed the Science & Technology Office in the Embassy of Switzerland in Tokyo in the past will head the new Osaka consulate. “The idea is also to prepare for the World Expo 2025 in Osaka where Switzerland will be represented with a pavilion,” Moesner said at the opening announcement in Tokyo.

Text: Martin Fritz for SCCIJ based on a press release of the Swiss Federal Department of Economic Affairs, Education and Research.