Tokyo (SCCIJ) – Two days before the closing ceremony, the Swiss Olympic Team has more than fulfilled its hashtag motto #allin4Tokyo by achieving the best Summer Games results ever, consisting of three gold, four silver, and five bronze medals. The previous highest score in this century was achieved in Sydney 2000 with one gold, six silver, and two bronze.

“We are very happy with the achievements of the Swiss Olympic Team. 12 medals so far are more than we expected. After seven medals for the Swiss team at the Rio 2016 games, we aimed to win at least eight medals in Tokyo,” told Alexander Waefler, the media director of the Swiss Olympic Association, the National Olympic Committee of Switzerland, the SCCIJ. Separately, he joined a SCCIJ webinar about Switzerland’s Olympic successes. 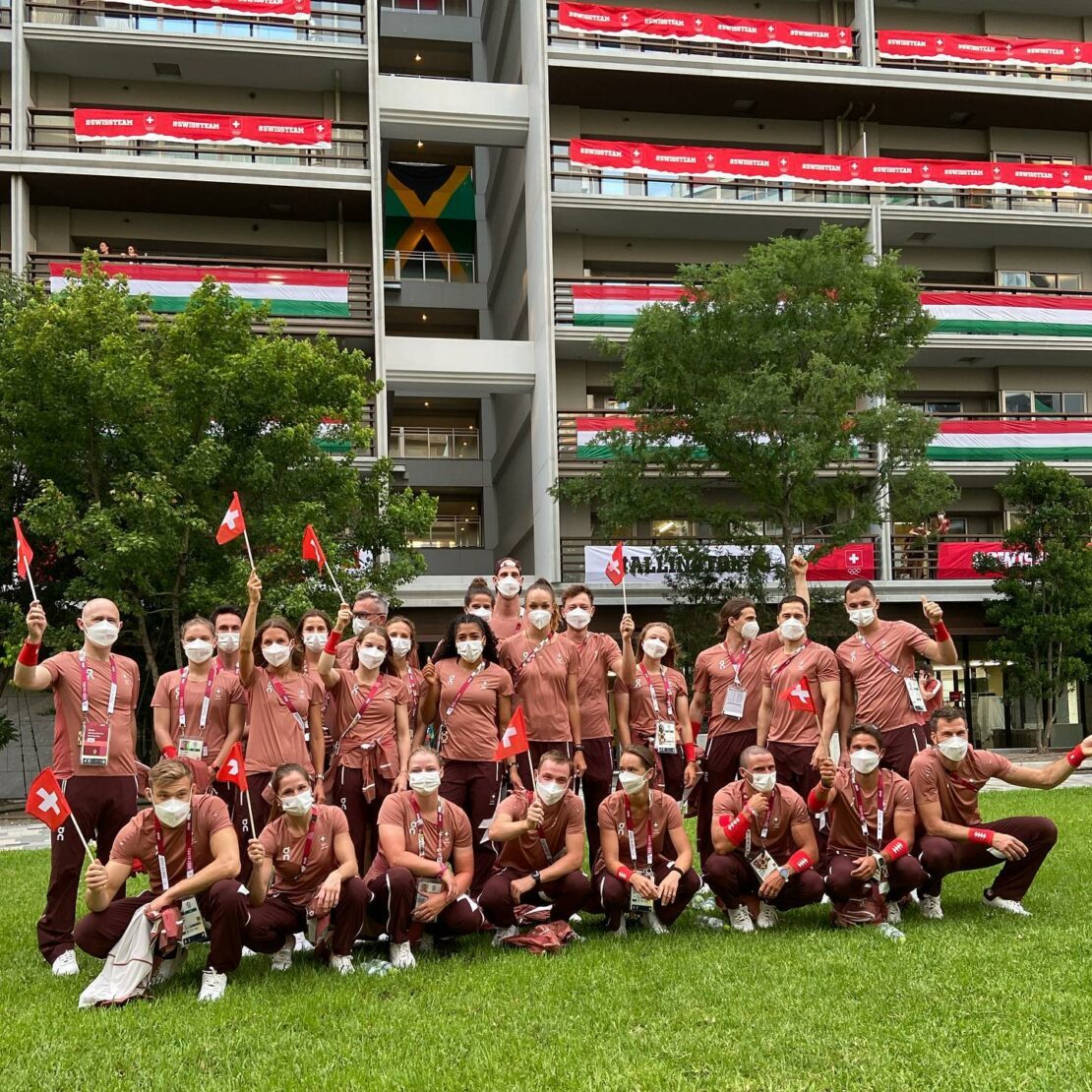 Members of the Swiss team assemble in front of their quarters in the Olympic Village in Tokyo (© Swiss Olympic Team via Facebook).

The shooter Nina Christen wrote Swiss sports history by becoming the first Swiss woman to win two medals in individual disciplines at the same Summer Games and only the seventh female Swiss Olympic Champion at Summer Games. She won gold in the 50 meter rifle three-positions and bronze in the 10 meter air rifle competition.

Jolanda Neff crowned herself Olympic champion in the women’s mountain bike race with a lead of more than a minute over teammate Sina Frei. Only twice had three Swiss won all three medals at the Olympics, the last time in 1936, but never before had a women’s trio succeeded. Now the saying goes: If there is a sports competition heading for the forests, a Swiss will come out first.

The tennis player Belinda Bencic topped her career in Tokyo with gold in the singles and silver in the doubles alongside Viktorija Golubic. After Marc Rosset in Barcelona in 1992, she is the second Swiss player to win singles gold – something Roger Federer and Martina Hingis never achieved. That’s why Bencic said, “This medal is also for Roger and Martina.”

Jérémy Desplanches from Geneva became only the second Swiss swimmer to win an Olympic medal with his third place in the 200-meter medley. In the final lane length, he caught bronze 0.05 seconds ahead of a Japanese. The last Swiss swimmer to win a medal at the Olympic Games was Etienne Dagon in Los Angeles 1984.

One day later, Noè Ponti swam a Swiss national record in the 100-meter butterfly in 50.76 seconds and sensationally secured bronze. It was the third medal of a Swiss swimmer at the Olympic Games since 1896, but already the second in Tokyo. “To win two medals in swimming is certainly something special,” media director Waefler told the SCCIJ.

Asked about the reasons for Switzerland’s achievements, he said: “The promotion of sports has developed during the last few years. Swiss Olympic as the national Olympic committee and umbrella federation of sports also received considerably more money compared to 2016 and could support the national sports federations and the athletes. But as always in sports you also need a bit of luck – in some competitions, we could have also ended up in 4th place.”

Waefler also commented on the Summer Games in the “bubble”: “Of course, it was not the same compared to games where you had the chance to leave the Olympic village and visit the host town. On the other hand, we believe that this situation may have helped the athletes to stay focused on their competition”.

He added: “Swiss Olympic would like to thank the Japanese government and the organizing committee for their efforts to make the games possible amid a difficult time and the Japanese people for their hard work, their friendliness, and their support!”