Tokyo (SCCIJ) – Mr. Charles Ochsner, founder and owner of the boutique consultancy CH Projects Management, is one of the few early members of the Swiss Chamber of Commerce and Industry in Japan who is still working and living in the country. He was SCCIJ vice president for many years and the chamber’s president from 2002 to 2005. In an interview with the SCCIJ, the Swiss lawyer reveals the motives behind his professional career in Japan, how Swiss and Japanese business cultures differ from each other and how his deep judo experience helped him to succeed in Japan.

The SCCIJ was founded only 35 years ago. What is the reason that you are the only “surviving” founding member?

After its founding in 1982, I joined the chamber in 1984. I was quite younger than all the other founding members. Because the chamber evolved as a place where the heads of all Swiss subsidiaries would gather on a regular basis, all large Swiss companies were represented by Swiss expatriates. Thus, all of them were quite senior to me.

How did you become a member of this prestigious group?

That happened as a result of circumstances. In 1984, I had just married my Japanese wife whom I met in Switzerland. We thought we would live in Geneva for the rest of our lives because I am a registered attorney-at-law at the Geneva Bar. But we agreed that at the beginning of my career I would come to Japan for two years and work there while staying near my wife’s family. These two years kept on extending. As a Swiss lawyer, I became involved in the organization of the chamber and helped to draft the bylaws. I am actually pleased to see that the chamber has kept over the years its character of a private organization based on a typically Swiss militia system, which for me is a guarantee of its success.

Interestingly, you did not work for any Swiss company at that time.

My Japanese father-in-law, who was also an attorney-at-law, introduced me to a Japanese law firm specializing in intellectual property. With 120 attorneys, it was one of the biggest firms at that time. That was my initiation to the Japanese legal world. My job was to assist Japanese attorneys with mainly arbitration cases where Swiss law was applied. Then I was contacted by the Tokyo office of the U.S. law firm Baker McKenzie and asked to collaborate for their services to their French speaking clientele. 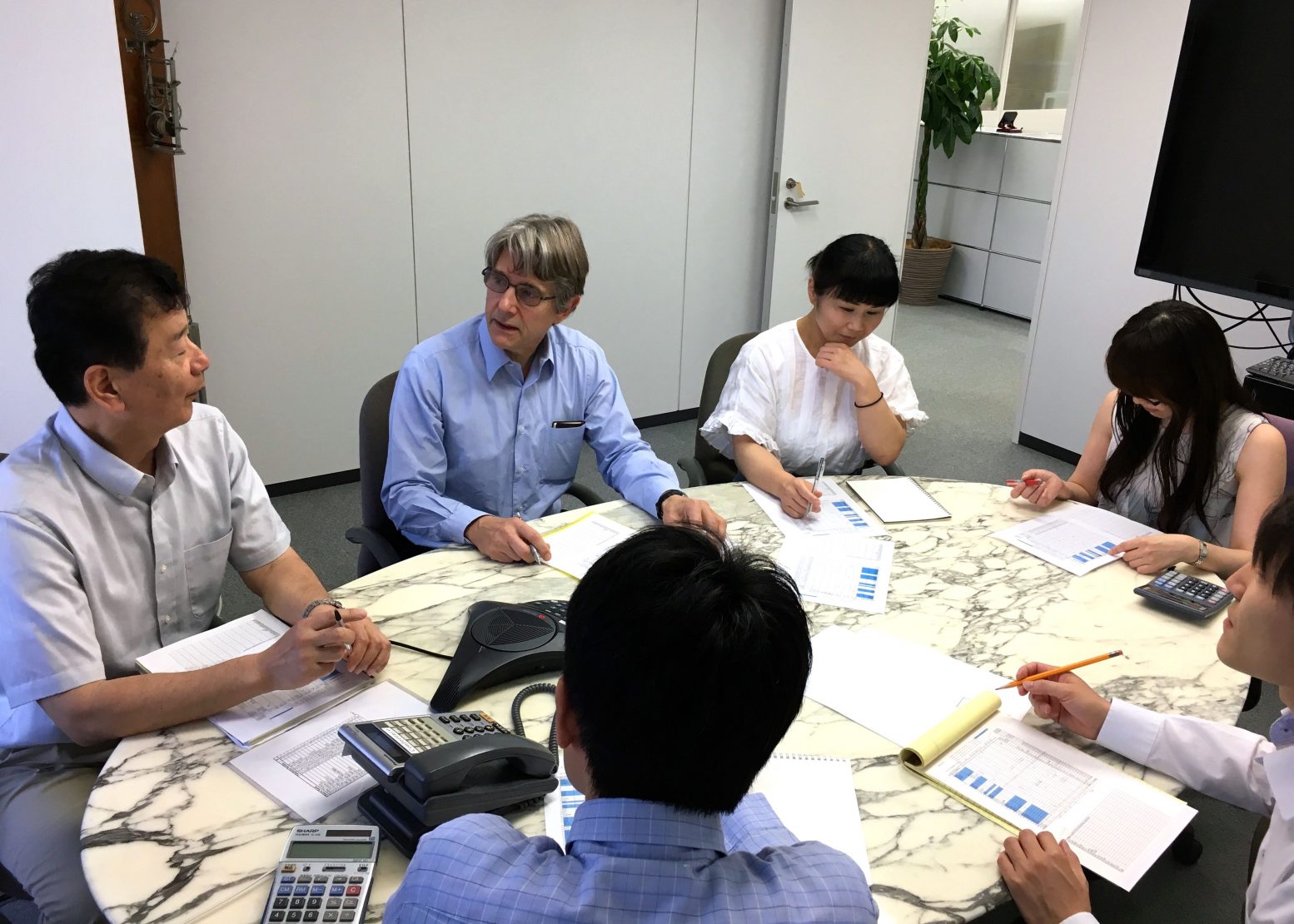 But soon after you decided to found your own company. Retrospectively, that looks very ambitious and courageous.

In 1988, Japan was experiencing the bubble economy. Everybody was investing in Japan. That encouraged me to start my own firm. I realized that in Japan lawyers are mostly involved in litigations – which is the last thing a Japanese businessman wishes to be involved in -, rather than in consultancy to avoid conflicts to happen. In addition, foreign lawyers at that time were not recognized. I then decided to open a consultancy office in Tokyo for foreign clientele and I also became a partner of PYTHON, the Geneva based law firm I represent in Japan, for Japanese clientele in need of advice on Swiss law.

But what about projects where you need advice on Japanese law?

I registered in 1998 as a Swiss lawyer in Japan with the 2nd Bar Association in Tokyo and established a network within it. So when I need expertise on Japanese law I have a network where I can choose depending on the case, the specialty and the litigation itself. This proves to be rather efficient. In addition, in Japan people are not really willing to litigate for the sake of principles like it is often the case in Western countries.

That sounds as if your professional approach was very much adapted to the Japanese environment from the start.

In Rome, do as the Romans do! I believe this was the right way of using my background and experience. It also corresponds more to what I prefer to do, build rather than repair. It is much more gratifying to put people of different cultures together, to elaborate a framework of successful collaboration, rather than to litigate in court.

What are typical projects you take up at your firm?

Quite often I am contacted by small and medium-sized mainly Swiss companies that already are represented in Japan by independent distributors or agents. When the foreign party decides to invest in Japan by itself, care should be taken that it will not destroy what the distributor had achieved up to that point. Sometimes it is quite difficult to persuade the foreign side to abide by the principles of Japanese business culture, actually in their own long term interest.

What are the differences between the Swiss and Japanese business culture?

When you already have a presence here, you have basically four “partners“ – your employees, the shareholders, the authorities and the clients. Now who comes first? In Japan, we all know that clients come first. You have to satisfy your clients 120 percent before even thinking of your next “partners”, the employees. If you want to show that you are here for the long term you have to have dedicated employees. The third partner you have to consider is the authorities, in particular the tax office. And it is only if something is left then, that you can think of paying some dividends to the shareholders. That is a long term approach many people in Western countries have forgotten.

How can you convince your Swiss clients to follow the Japanese thinking?

I am telling them that their business results in Japan will depend on the quality of the human relations they will build, not only on the quality of their products. The customer buys the product because of you. You have convinced the other side. In case of trouble with the product, they know they can rely on you. This relationship does not work anymore when the foreign company wants to abruptly take over from a distributor. I have avoided a number of possible failures in persuading clients not to follow a too Western way.

Are there more major gaps between the business cultures?

When Swiss companies come to Japan, many of them have already invested in other foreign countries. Thus, they try to replicate these experiences in Japan but for some reason it often does not work. One reason is the different concept of time. Japanese companies work with long term objectives. Another difference is the time spent internally by a Japanese company to prepare a project in all its details before even making the first step. Foreign parties need patience.

At the age of 16, you were the youngest Swiss at that time who wore a black belt in judo. You were twice Swiss national judo champion and at 18, you won European cadet championship in your weight class. Has this experience helped you in Japan?

Yes, it certainly did. With judo you learn how to place yourself, how to keep your balance, how to control your opponent. Actually, this was the best initiation to working in Japan I could imagine. In a Japanese company and any place where you go in Japan you have this hierarchical organization where you have the senior and the junior, this respect you owe to the senior, and this kind of paternalism towards the juniors. This kind of hierarchical behavior is exactly what you have in a dojo. This is also the place where you learn how to lose, as you will always find someone stronger than you. It helps to remember where your limits are.

Has judo also influenced the way you make business?

Yes, it has. Actually, I am not seeing myself as doing business. I try to be at the disposal of my clients who need assistance to run their operations efficiently in following local regulations on corporate, employment, tax matters, in this social specific environment, to make things easier for them to understand. I see my profession rather as a service.

When you look back on our professional career in Japan – what comes to your mind first?

Well, perhaps remaining aware that Japan has its own culture. We are here to learn from it and to adapt our strategies to achieve success.

CH Projects Management Ltd. is a consulting company active in Tokyo since 1988. It started its activities in supporting Swiss companies and has extended its clientele mainly to small and medium-size companies from Europe, China, India and the USA in connection with their operations in Japan.

CHPM provides a large range of services including setting up representative offices, branches and subsidiaries in Japan. CHPM handles all non-core activities on an outsourced basis. The services include bookkeeping, accounting, tax matters, employment management, product registration and other operational assistance services.

CHPM aims at developing long-term and close relationships with its clients by offering flexible, tailor-made solutions in English, Japanese, French and German. With a strong Japanese and international staff, CHPM has developed a good knowledge and understanding of Japanese culture and values, which facilitates communication with local business partners.