Tokyo (SCCIJ) – Swiss scientists are doing groundbreaking work to give paraplegics new hope. Their research has produced breakthroughs in technologies that could enable people who have suffered spinal cord injuries to walk again unaided. Their work on exoskeleton technology is among the most promising and has helped a young woman to regain control over her life, as the House of Switzerland reports. The SCCIJ is also doing its part to support this huge and relevant endeavor.

The word exoskeleton has something half-human, half-bionic about it. Which is a clue to how it actually works: it has to be attached to a human to operate. The TWIICE One model was initially designed for Cybathlon, a Swiss initiated competition of technologically assisted paraplegics and their engineers (see below), by three scientists from the robotics systems laboratory at the Swiss Federal Institute of Technology in Lausanne. It is now Silke Pan’s hope for a return to a vertical, autonomous life. 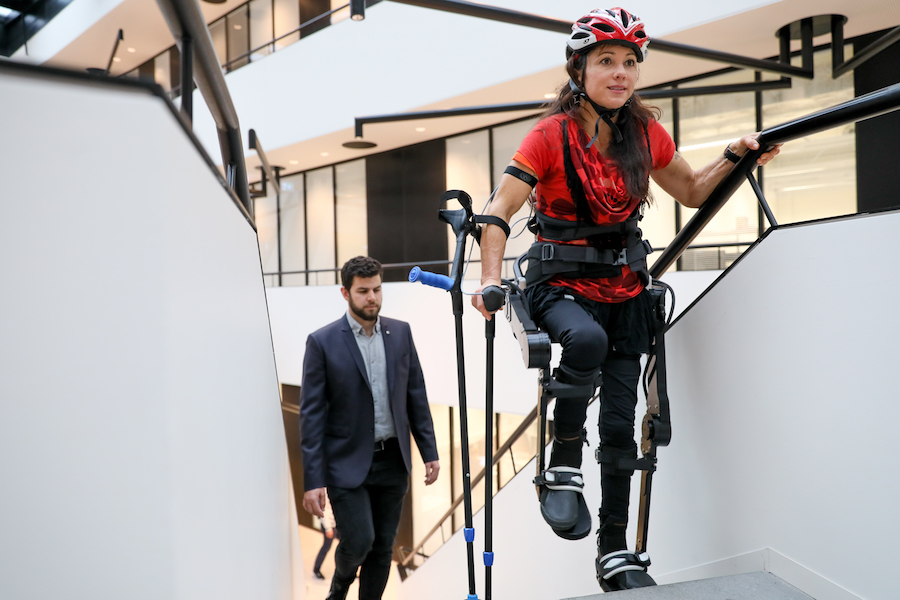 Their shared adventure began in 2015. “We were looking for a person with paraplegia who had an athlete’s body and that’s how we met Silke,” says Tristan Vouga, one of the three young designers of the exoskeleton. A former circus artist who became paraplegic after a trapeze accident in 2007, Silke Pan is now world handcycling vice-champion. Never one to shy away from a challenge, she immediately joined the project.

The exoskeleton has already been in existence as a walking aid device for some time. The new potential is its use without assistance – enabling paraplegics to regain independent movement. “Silke can get out of her chair alone, she can get into the exoskeleton unaided and can pilot it herself,” says Tristan. 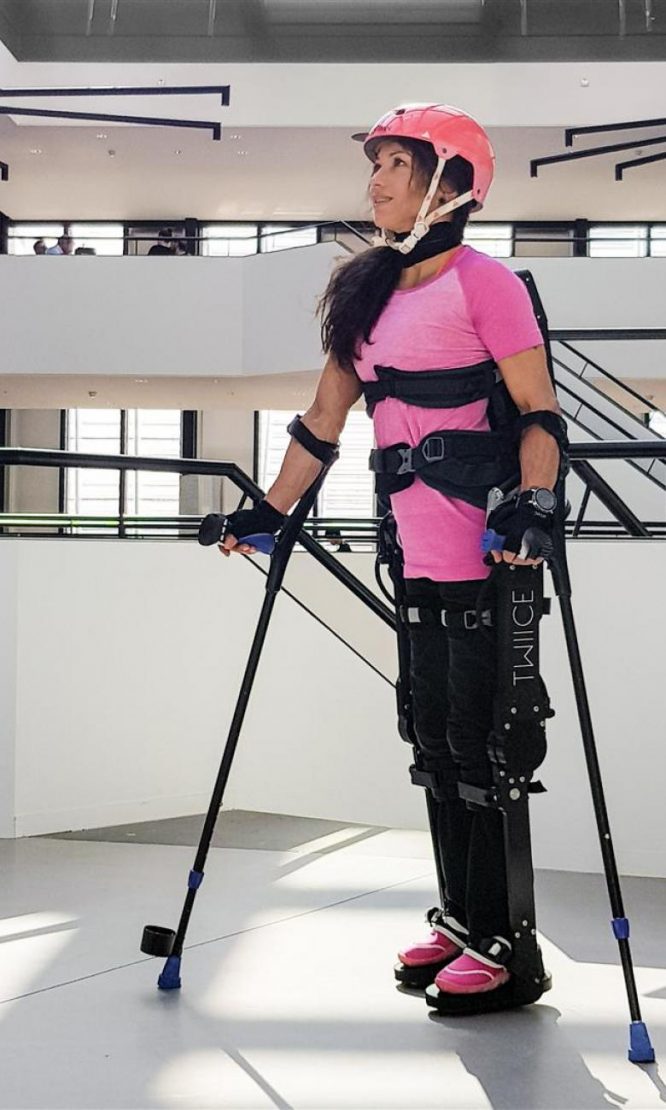 The TWIICE One has an articulated structure with two ‘legs’ and is attached with velcro fasteners to the feet and straps around the thighs and chest. “It has two electric motors on each leg which move the hip and knee joints and a ‘u’-shaped structure which is worn over the hips,” explains Romain Baud, another of the designers.

It is operated by a connected watch and two crutches, one of which is equipped with a controller. The carbon fiber and aluminum structure weighs about 15 kilos and has a battery life of three hours. It can be operated at three different speeds and even allows you to go up and down stairs. “For a long time, I felt like half my body was dead. Being able to stand up and walk on my own is like being given a new lease of life,” says Silke.

Her smile and her ease in piloting the exoskeleton show the freedom she clearly feels. “The hardest thing is to stay upright,” she says. “When I walk with the exoskeleton, I no longer feel like a victim of my disability, I feel like I’ve regained the upper hand. It is so freeing to escape the weight of my wheelchair and that feeling of being trapped.”

Everyday autonomy is the aim

With the exoskeleton, Silke and the researchers picked up fourth prize at the Zurich Cybathlon in 2016 and won gold at the Düsseldorf Cybathlon in 2017. The team is already registered for Cybathlon 2020, which will take place in Zurich. While the sporting ambitions are already defined, the exoskeleton is still a prototype and its designers want to improve it for everyday use. “We want to develop more fluid walking modes and sensors capable of detecting obstacles in the path of the user before we start thinking about getting the necessary certifications to have it patented and recognized by insurance companies for future commercialization,” says Tristan. Silke, meanwhile, is already looking forward to being able to give up her wheelchair and regain her independence on a daily basis thanks to the exoskeleton.

Note: The Swiss Chamber of Commerce and Industry in Japan has decided to support the “Cybathlon Wheelchair Series 2019” in May in Kawasaki with a donation. Cybathlon is an event created and organized by the Swiss Federal Institute of Technology Zurich (ETH Zurich) and involves races of pilots with disabilities and their engineering teams in six different disciplines.

Text and photos: House of Switzerland