Tokyo (SCCIJ) – Ms. Elisabeth Schneider-Schneiter, Vice-President of the Foreign Affairs Committee of the Swiss parliament and President of the Parliamentary Group Switzerland-Japan, has recommended during her speech at the SCCIJ March Luncheon that Switzerland refrains from any protectionism in order to continuously attract foreign capital and foreign talents. Her anti-protectionist attitude was shared by the second luncheon speaker, former Minister of Economy, Trade and Industry, Mr. Akira Amari. He praised the Trans-Pacific Partnership treaty (TPP) as the new “gold standard” of trade treaties because it also includes the protection of direct investments and intellectual property rights. It should become a global standard, he told the 90 SCCIJ members and guests at the luncheon.

The topic for the two speakers of the March Luncheon was “The rise of protectionism and the future of free trade”. Ms. Schneider-Schneiter had come to Japan with seven members of the Swiss parliament, called National Councilors, to explore how Swiss companies in Japan and Japanese politicians are reacting to the new protectionist attitude displayed by the U.S. administration under President Donald Trump.

The visit follows the first meeting of the Swiss group with the Japanese-Swiss parliamentary group last October in Bern. The Parliamentary Friendship Group from Japan, headed by Seishiro Eto, exists already since 1988, while its counterpart in Switzerland was founded just two years ago at the end of the anniversary year 2014, when 150 years of bilateral diplomatic relations were celebrated. 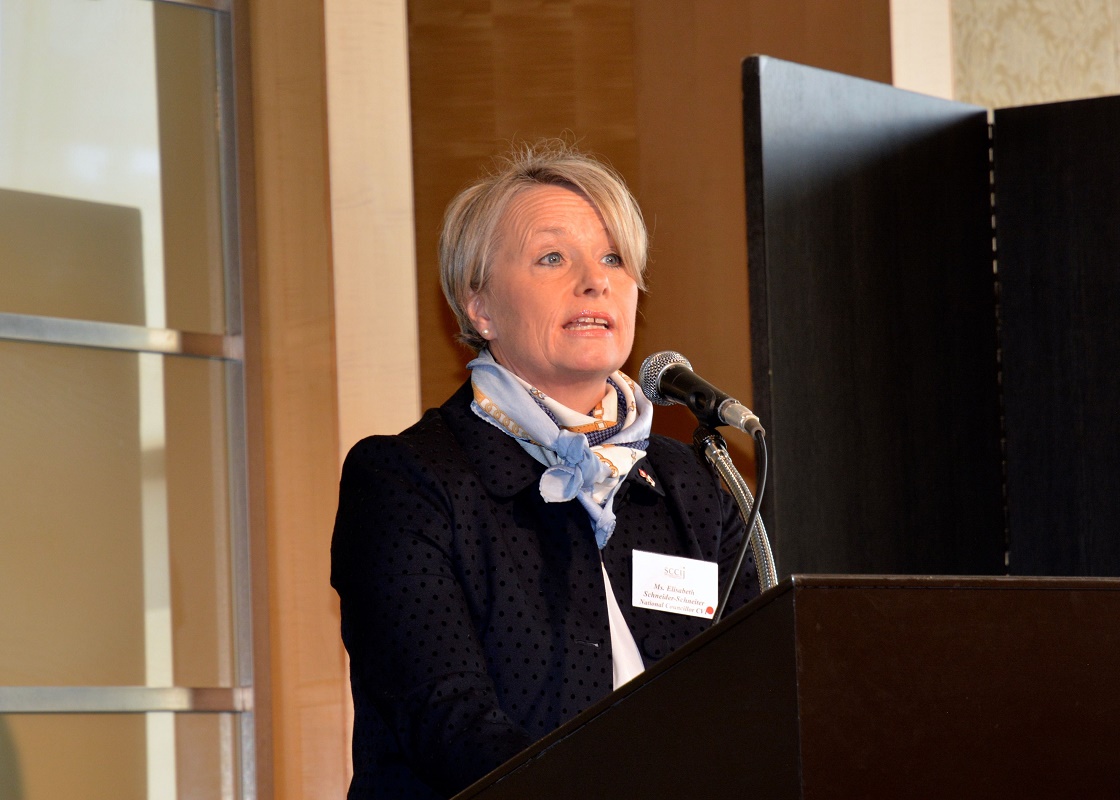 Ms. Schneider-Schneiter explained the development of Swiss-Japanese trade relations and underlined the high interest of Switzerland in free and open markets. With a trade volume of just over 11 billion Swiss francs last year, a growth of 9.7 percent compared to 2015, Japan remains Switzerland’s fourth most important trading partner in Asia (behind China, Hong Kong and India) and its seventh most important trading partner globally. Swiss companies would trust the stability and the good framework conditions in both countries, she said. The fact that Japan remains the most important Asian investor in Switzerland and Switzerland the fourth largest European investor in Japan would speak of that truth.

Against global trend of rising protectionism

Ms. Schneider-Schneiter praised the results of the Free Trade and Economic Partnership Agreement (FTEPA) between Japan and Switzerland which entered into force on September 1, 2009. During the following five years, on average 63 percent of Swiss exports to Japan made use of the FTEPA. “Compared to other FTAs, this is a fair rate and saved importers of Swiss goods into Japan around 100 million Swiss francs on customs duties”, the speaker said. At the same time, 53 percent of Japanese imports into Switzerland utilized the agreement to save almost 50 million Swiss francs on customs duties during the same period. “But we cannot rest on our achievements and need to work through our governments to adapt and improve the agreement”, she demanded.

Additionally, she voiced her concern about the global trend of rising protectionism in terms of customs and duties but also developments restricting the freedom of movement and residence. “Amongst others, protectionism has become one of the main elements slowing down global trade at all”, Ms. Schneider-Schneiter warned. In some regions of the globe, the volume of exports is already shrinking.

Many enterprises are considering where to produce their goods. Relocating production sites closer to their clients might be a valuable approach to avoid being negatively impacted by protective measures. But the price the economy as a whole is paying at the end of the day would be high, she stated: “Less competition and significantly less incentives for innovation are the consequences.”. Switzerland’s openness would continuously attract foreign capital and talents, thus the country should refrain from any protectionism and isolation. 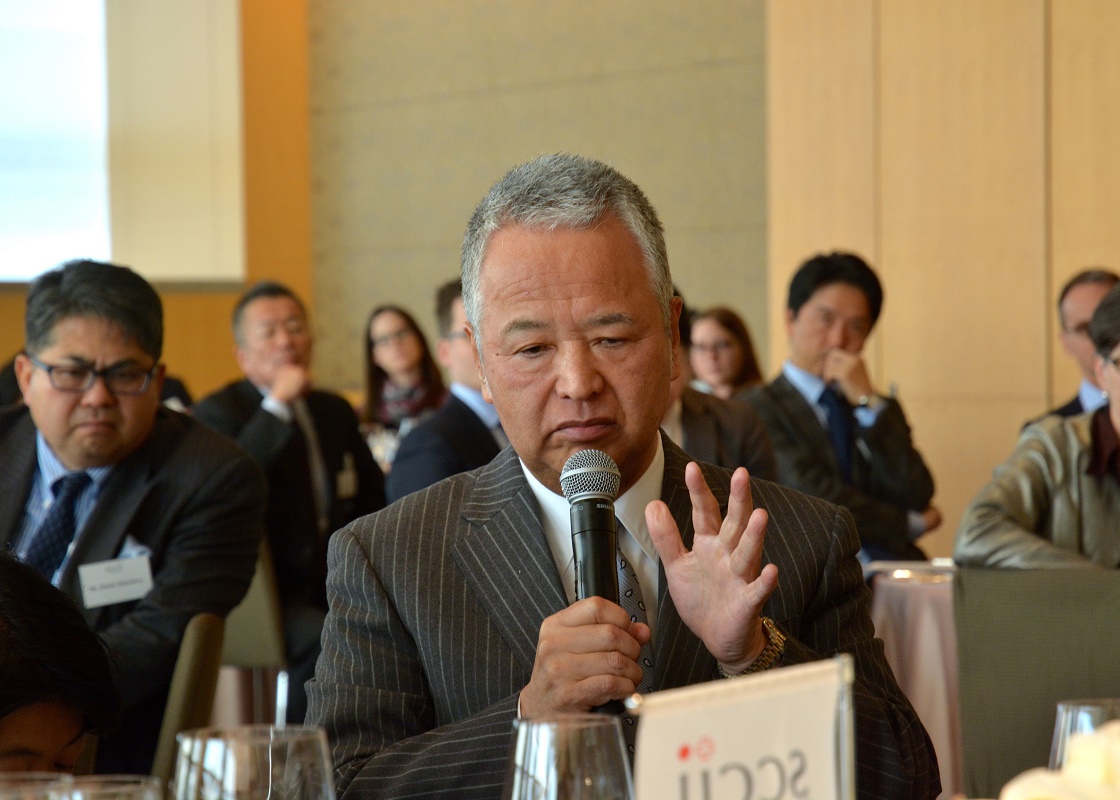 Former METI minister Mr. Akira Amari seconded Ms. Schneider-Schneiter with his own plea for free and open borders and against protectionism. He recounted his recent visit to the United States where he met members of Congress and other people in responsible positions. “Many people shared with me their views that it is a waste for U.S. to withdraw from TPP , that it is a loss for U.S.”, Amari said. But even they would not understand the real advantage of TPP.

The center of attention would often be that TPP eliminates tariffs, but more significant would be that it establishes fair rules for the 21st century. “TPP is an agreement accomplished by 12 countries in Asia-Pacific region. It is the agreement to improve the rules which even WTO could not. And to make such rules the standard model among the Asia Pacific region, and to realize the global standard model”, he emphasized. “The U.S. could gain hundreds of times more from the potential wealth Asia has, […] but unfortunately, the U.S. is not aware of it,” he lamented. 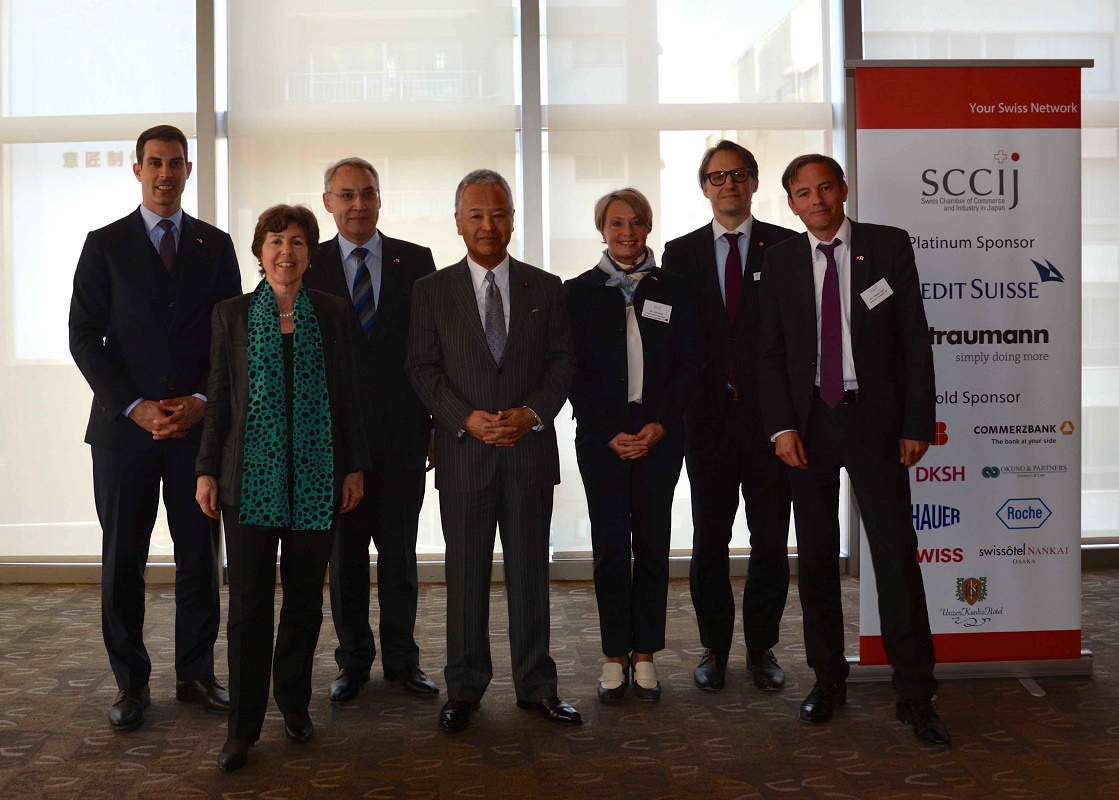 One example would be the high demand for infrastructure in Asia. But in some countries government-owned companies would get such infrastructure orders because they have advantages compared to private companies. “It is not a fair competition if some companies are supported by the government. Unless (TPP) “rules” are decently introduced to such government-owned companies for equal footing”, Amari said. Also, some countries would require a technology transfer in return for direct investment and some would not properly protect intellectual property.

He pointed to China’s vision “Made in China 2025” for Chinese manufacturers. Until 2025, 80 percent of specific markets such as aircraft, space and rockets have to be dominated by China products. Once foreign companies have transferred their technology to China, these companies would not be needed anymore. “We must avoid such unfair situations”, Amari demanded.

Free Trade for growth and development

“TPP is the global standard rules between 12 countries, with Japan and the U.S. in the center. It is extremely important to develop these rules initially in Asia Pacific region and on to the global standard”, Amari stated what presumably is also the position of the Japanese government. He suggested that the TPP standard should also be applied to the free trade treaty EPA between Japan and the European Union. “TPP and Japan-EU EPA are very similar”, he explained. The negotiations between EU and Japan will be reflecting tariffs and rules incurred with TPP.

In contrast, the TPP alternative called Regional Comprehensive Economic Partnership (RCEP) would be a partnership with very low ambitions and unclear rules and also dominated by China. “Making rules that are fair, equal, transparent and foreseeable will stimulate investment”, he added. Thus, turning TPP into a global standard would contribute to growth and development in Japan, the EU and the world, he concluded.