Tokyo (SCCIJ) – In a cheery and entertaining lecture, June Luncheon speaker Dr. William Saito shared his assessments of the systemic challenges for startup companies in Japan with more than 50 members and guests of the SCCIJ, giving insights on how to be successful as an entrepreneur based on his personal experience. Dr. Saito, educated as a medical doctor, now works as a special advisor to both the Cabinet Office and the Ministry of Economics, Trade and Industry (METI) of the Government of Japan. He has helped numerous entrepreneurial ventures and even sold or helped to take a few public. His passion for cybersecurity has led him to become one of the world’s foremost experts in this field. He is also playing multiple roles in supporting various stakeholders.

From medicine to cybersecurity

“My parents wanted me to become a medical doctor but they forgot to tell me how long I had to be one,” Dr. Saito started his lecture on a humorous note. “When I finally became one, I already owned a company with 44 employees.” The speaker emphasized to have no normal background in information technology. Nevertheless, his U.S. startup company started by developing a fingerprint reading technology and later expanded into information security. The technology was acquired by Microsoft and is still used in current fingerprint readers, Suica cards and other security technologies. He qualified this success story by emphasizing that he failed six times as an entrepreneur. “Luckily, the last thing saved us,” he admitted frankly.

His current mission is to support the creation of the next generation of entrepreneurs in Japan. Dr. Saito attempts to achieve this by being an investor, a board member, a teacher, an advisor, a judge of business plans, a commentator and an entrepreneur at the same time. “I started by trying to promote entrepreneurism in the most non-entrepreneurial environment – the Japanese Diet when serving as CTO for the Fukushima nuclear accident commission,” he said with a smile. Saito is also associated with the World Economic Forum and is involved in hosting the Cyber3 cybersecurity conference. His current main concern is that Japan is not keeping pace with an economic world that is changing increasingly faster. 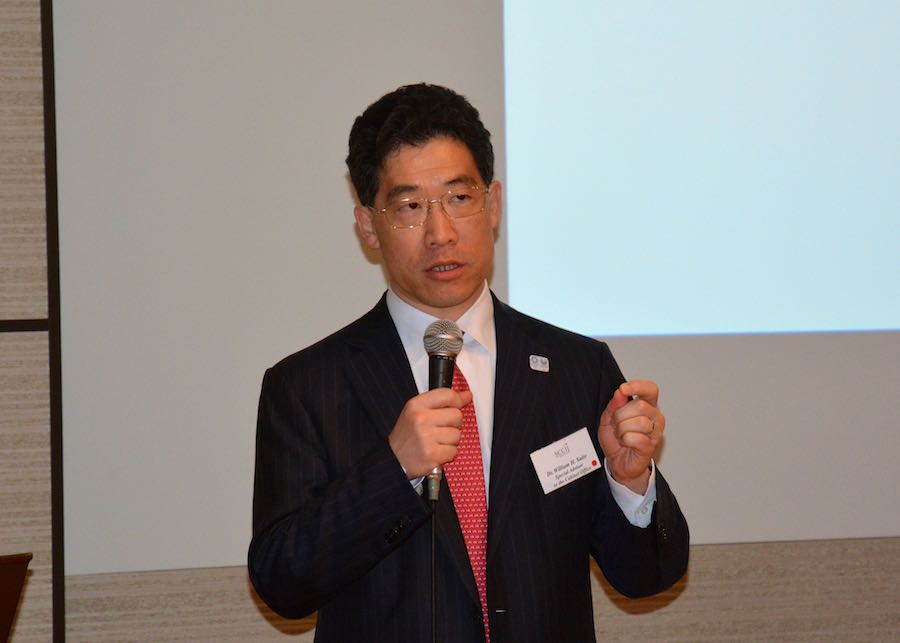 “Markets are changing”: “Data is the new oil,” he argued. A decade ago, the world’s largest companies all were oil-related but now they are all IT related with the top 5 being Apple, Google, Microsoft, Amazon and Facebook. The flip side of this would be that Japanese corporations would suffer from low productivity because they do not use ICT efficiently.

Moore’s law still rules the world: This law says that communication and information technology becomes smaller, faster and cheaper regularly. After the age of transistors and storage chips, sensors will see exponential growth in a second machine age. But in the area of data collection from these sensors via the Internet of Things, there are not many active companies in Japan, Dr. Saito said.

Innovation versus invention: Japan’s prime minister Shinzo Abe has propagated a “Society 5.0” which would be based on the Internet of Things. But the luncheon speaker is worried whether Japan will be able to acquire and control the value chain of this new business. “In Japan, innovation means invention,” he said. Japan would be also very good at kaizen, which means going from 1 to 100. “But real innovation is different and means turning 0 into 1, take an idea, flip it around and make money,” the speaker explained.

Hardware versus software: Dr. Saito has another concern: “Japanese corporations are very part-based.” 77 percent of output would be parts and components. But only 7 percent of these producers have an operating margin beyond 7 percent whereas 25 percent have a margin below 2 percent. “But Japan is no longer a parts country, which is mirrored in the decreasing Japanese content from one iPhone generation to the next,” he warned. 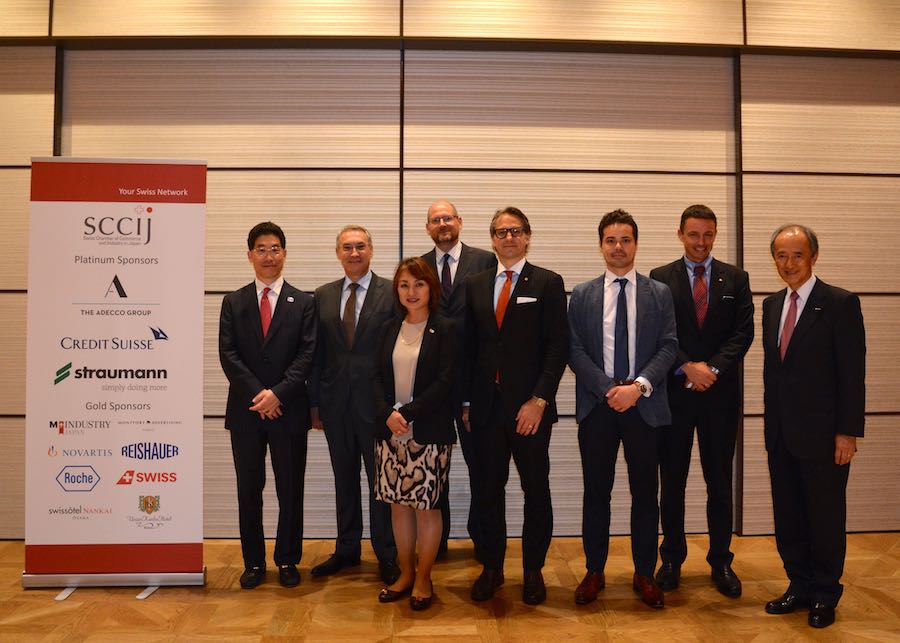 System thinking means platform creation: “Japan needs more system thinking. Thus, we need to go from parts to systems,” the speaker demanded. Software would create the value, not the hardware. “Now everything is about networks but if you want to be part of the global network you also need English,” Dr. Saito stated. There would be no single Japanese company on the list of the world’s largest ICT based companies because they are not very good at networking.

Innovation means (and needs) failure: “At the end of the day, innovation means failure,” the speaker argued. The first Japanese kanji for “failure” would mean “losing”, which may explain why the Japanese are so risk averse, he added. But innovation would need failure and thus Japan would need more tolerance for failure. “Fail early, fail fast, fail often, fail forward” – with this plea, the speaker ended his lecture. A lively Q&A session followed.

One of Nikkei’s “100 Most Influential People for Japan,” Dr. William H. Saito was named Entrepreneur of the Year in 1998, and was widely recognized as an authority on cybersecurity. In 2004 he sold his company to Microsoft, moved to Tokyo, and founded InTecur, a venture capital firm. In 2011, Saito was named Chief Technology Officer of the Fukushima Nuclear Accident Independent Investigation Commission. In 2012, he was appointed to a council on national strategy which reported directly to the Prime Minister.

Active in the World Economic Forum, he consults for several national governments and is currently the Special Advisor to the Cabinet Office, as well as for the Ministry for Economic Trade and Industry (METI) for the Government of Japan and works as a TV commentator, newspaper columnist and author. His best-selling The Team (Nikkei BP) appeared in 2012.