Tokyo (SCCIJ) – The Chairman and the Executive Director of the European Business Council (EBC) in Japan informed more than 60 members and guests of the SCCIJ December luncheon about the impending reform of their institution and the intended benefits. With totally different governance and a brand-new constitution, the EBC will become more efficient in advocating the interests of European companies in Japan, the two top EBC representatives promised. 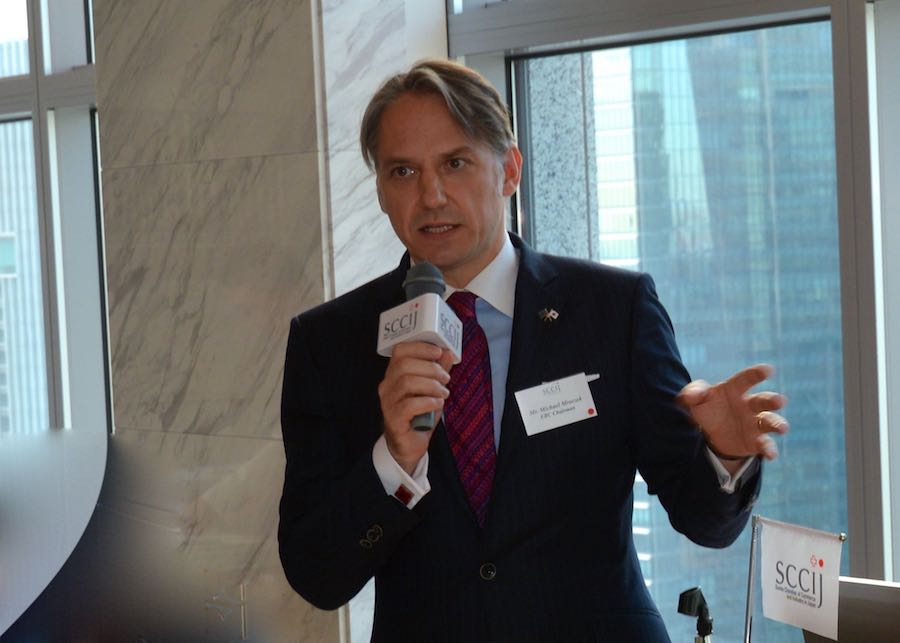 “Our task is advocacy”

At the outset of the luncheon, outgoing executive director Francesco Formiconi described the primary assignment of the EBC as a lobbying body. “We talk with Japanese authorities about rules, competition and business habits in Japan, for example, non-tariff barriers discriminating against European and foreign companies,” the Italian said. “We try to create a level playing field for domestic and foreign companies here in Japan.”

The EBC builds connections between European chambers and institutions and Japanese associations like the Ministry of Economy, Trade and Industry (METI), the business lobby Keidanren and retail organizations. Its most relevant instrument would be topically structured committees where about 350 managers of over 200 companies exchange information about their field. The EBC secretariat transmits their policy demands and recommendations to the respective Japanese authorities, sometimes together with non-European chambers.

The executive director named the free trade agreements as an example of the EBC’s value. The council issued nearly 20 position papers to get the European Partnership Agreement with Japan into place. The EPA came into force in February this year. “But such agreements age very quickly,” Mr. Formiconi warned. “Negotiations for the EPA started in 2011, but the digital economy changes the world so quickly that we need to improve trade relations continuously,” the luncheon speaker said. 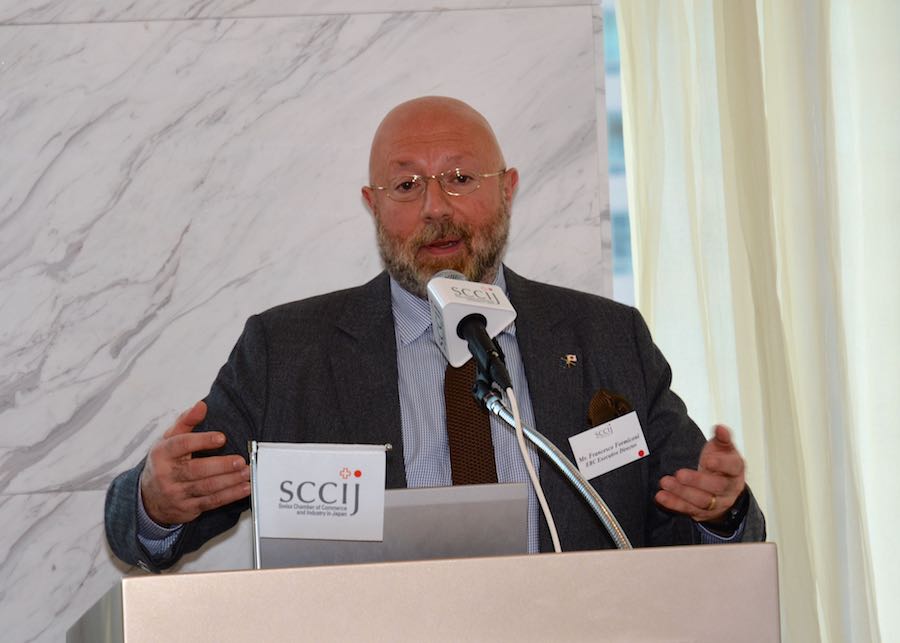 In the second part of the luncheon, EBC President Michael Mroczek explained that the current European Business Council follows a hybrid model: “We are a chamber of the chambers, but we also have direct company members, and we have 25 committees,” he said. With its complicated governance structure, the EBC would not be able to concentrate enough on its core business of advocacy, he said about the current situation.

“But 2019 has been a year of improvements which will bring peace back to the galaxy,” Mr. Mroczek announced. After a lot of communication with all stakeholders, the EBC would introduce a new constitution with a new structure and a new voting right system. The Board of Directors would meet more often, and the management would be empowered. “Also, the committees will move into the EBC center but without a decisive voice in governance matters,” the speaker said. 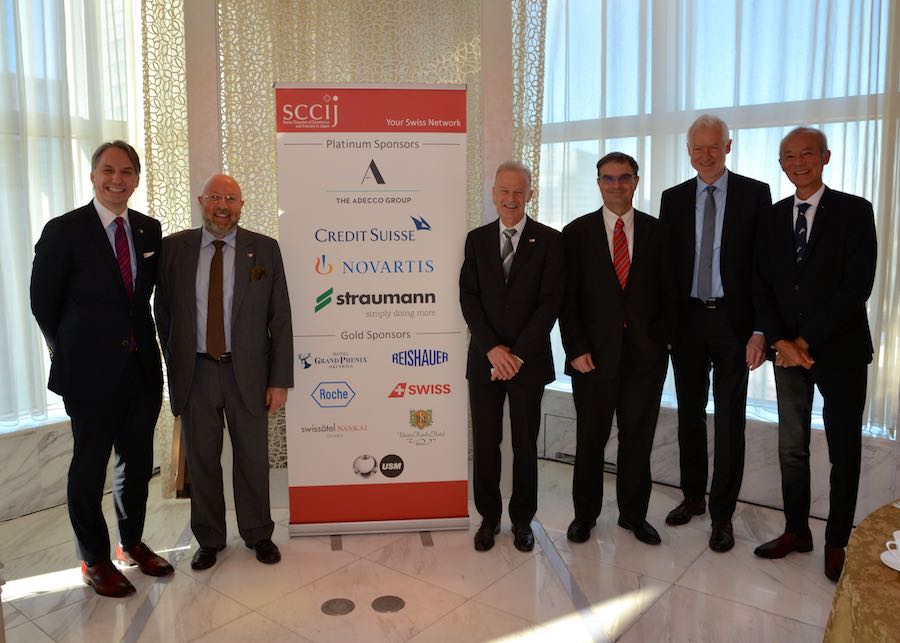 Benefits of the “new EBC”

Executive director Formiconi emphasized that with this new structure, the EBC could make its positions more comprehensible through papers and meetings. He praised the strengthening of the committees. “Some companies only realize in committee discussions with other companies of the same sector that they have advocacy issues or need to change their business practice to become more efficient,” he told his attentive audience. Also, local managers of European subsidiaries in Japan could acquire a sense of belonging to the European business community as a result of participating in committee deliberations.

At the end of the luncheon talk, Mr. Formiconi explained further benefits of the council activities. For example, the EBC would disseminate information about new laws in Japan. “It is not easy to find explicatory information events in English in Japan,” he said. In addition to current services, the EBC will develop a new website and strengthen its business magazine Eurobiz. Mr. Mroczek promised that the new governance structure would come into being in the coming year 2020. “Originally, I hoped to have it in place by the end of this year, but this is Europe, right?” he stated with a wink. “Please, do not blame the Italians for this,” Mr. Formiconi answered with another wink. The audience rewarded the presentation of both luncheon speakers with a big applause. 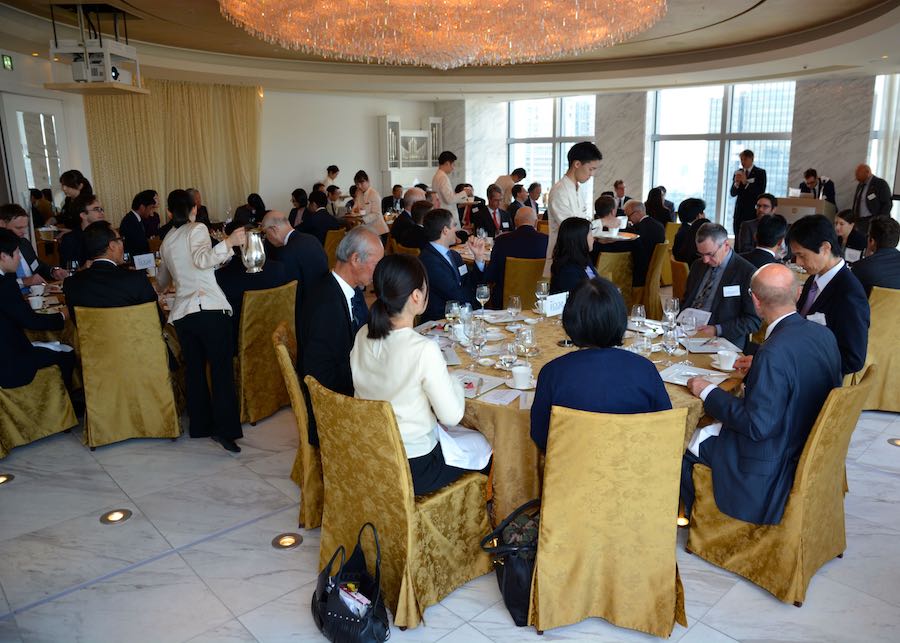 Biographies of the speakers

Mr. Michael Mroczek is currently the Chairman of the European Business Council in Japan: The Swiss licensed attorney holds a Master of Laws degree from the Basel University (Switzerland) and an LL.M. in US Law from Beasley School of Law at Temple University (Philadelphia). He is admitted as a foreign attorney in Japan. His main areas of practice are International Arbitration, Corporate Law, Commercial Transactions, Employment Law, Immigration Law, and FinTech. He is a partner at Okuno & Partners – Attorneys at Law (Switzerland) and lectures international arbitration at the University of Tokyo.

Mr. Francesco Formiconi serves as Executive Director of the EBC since October 2018. The Italian graduated in Social and Economic Sciences at Bocconi University in Milan and in Japanese Language and Culture at the University of Foreign Languages (Osaka). He worked for the Banca Nazionale del Lavoro in Hamburg and Hong Kong, before moving to Japan in 2007, and successively served at Safilo Japan, Giorgio Armani Japan, and Japan Europe Trading. He also chaired the Italian Chamber of Commerce in Japan for four years and was appointed Cavaliere Della Repubblica Italiana in 2012 for his contributions to the Italy-Japan relations. He is a contract professor for the “Business of Fashion Industry” at Doshisha University (Kyoto).