Tokyo (SCCIJ) – Switzerland’s railway industry has presented itself for the first time in a joint booth at Japan’s most relevant railway exhibition. A “Swiss Pavilion” at the Mass-Trans Innovation Japan showcased 13 renowned railway suppliers and system providers displaying their innovations and products. The Embassy of Switzerland in Japan and Swiss Business Hub Japan / Switzerland Global Enterprise organized the Swiss exhibition booth. 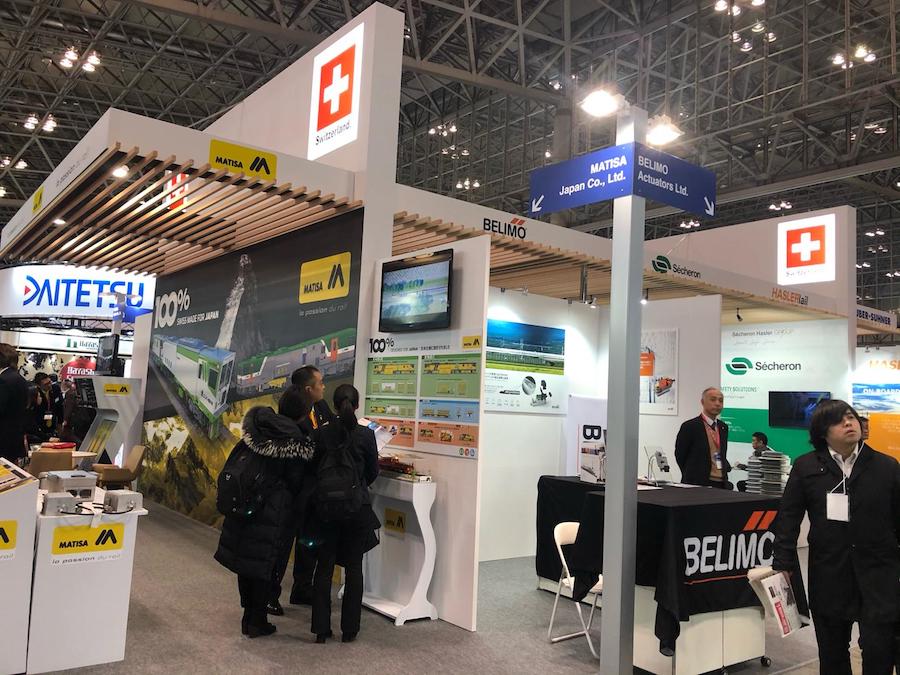 Long experience in the Japanese market

Famous for its scenic train rides, Switzerland boasts 5,200 km of railway lines, 1,000 km of mountain tracks, and with the Jungfraujoch at 3,454 m, the highest train station in Europe. Furthermore, the country was ranked first among national European rail systems in the 2017 European Railway Performance Index for its intensity of use, quality of service, and high safety rating. The Japanese railway industry also regards such features highly.

The Swiss Pavilion intended to capitalize on this outstanding reputation with a focus on technological developments in pursuit of safety, security, comfort, environment, and energy saving. Large companies like Leica Geosystems with their geodetic and geotechnical measuring systems, Sécheron, a leading supplier for electronic safety components and solutions for rail vehicles and traction power systems, or Matisa, a provider for automated track maintenance, displayed their newest technologies and applications.

The majority of the exhibitors have a long-standing relationship with Japan and have themselves successfully established in the Japanese market. The exhibitors have managed to build sustainable relationships with major railway companies in Japan. Thus, Swiss technologies have become known for their reliability, durability, and safety. ALPHA Elektrotechnik, Amberg Technologies, Belimo Actuators, Geobrugg, HaslerRail, HUBER+SUHNER, LEM, PB Swiss Tools, Selectron Systems and Zoppas Industries Switzerland also exhibited at the pavilion.

At the exhibition, Swiss Federal Railways (SBB) and Swiss Center for Electronics and Microtechnology (CSEM) held a seminar about artificial intelligence as instrument of track maintenance. Marcel Zurkirchen, Head of Measurements and Diagnostics at SBB, and Philipp Schmid, Head of Robotics and Machine learning at CSEM, explained the intelligent detection system that is to revolutionize the process of track inspection.

SBB is the national railway company in charge of operating the Swiss railways’ track system and its maintenance. Bearing the responsibility for the supervision of over 3,000 km, SBB started to develop a framework to locate defects on the trackways by using inspection wagons. They collect a massive amount of data by taking pictures of the track conditions with ultra-high-speed cameras. Also, they add supplementary information such as weather conditions and GPS data. To process those data sets, SBB turned to CSEM for cooperation.

This Swiss research and development center bridges industries and academia to provide technical solutions in the areas of microtechnology, nanotechnology, microelectronics, systems engineering, photovoltaics, and communications. Its local branch in Alpnach focuses on deep learning. By mimicking the neuronal layer structure of the human brain, algorithms process large data amounts to recognize patterns.

In the case of the images generated by the SBB inspections, CSEM trained their software to locate defects on the tracks and differentiate between a real weakness and insignificant items, for example, a piece of chewing gum stuck on a track. The algorithm can discern between various categories of defects – such as mistakes in wielding or damages caused by erosion – and can track their development by overlaying data collected at a later time.

Text: SCCIJ with material of Swiss Business Hub Japan at the Embassy of Switzerland in Japan