Tokyo (SCCIJ) – Switzerland has finally started its long exit from nuclear power. For the first time in the more than 50-year-long history of the production of nuclear energy in Switzerland, a nuclear power plant, the one in Mühleberg, was taken off the grid forever. According to its new energy plan, the other four reactors in Switzerland will also be decommissioned, but there is no timetable for these steps because they currently generate one third of electricity. The government has taken the exit decision mainly in response to the Fukushima accidents of March 2011. 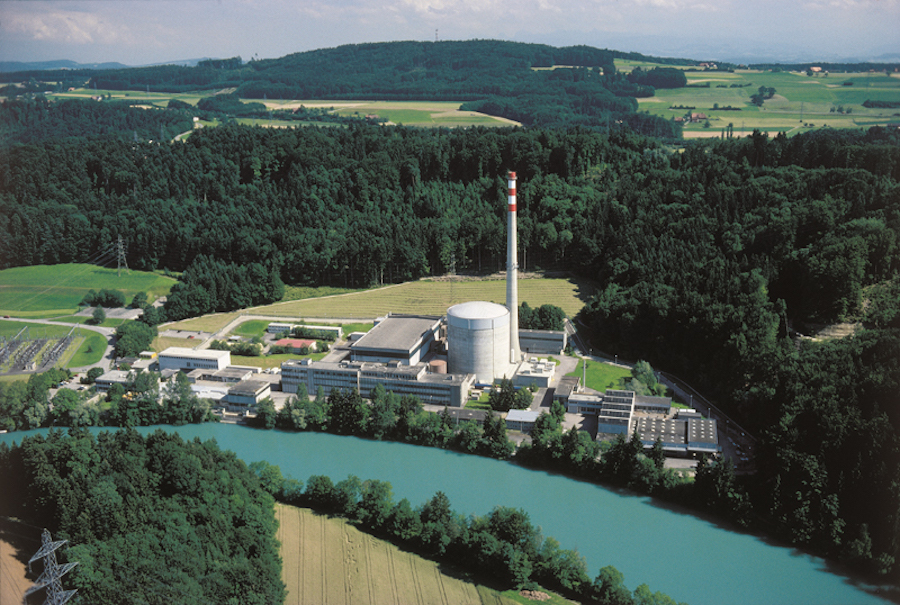 An aerial view of the Swiss nuclear power plant in Mühleberg near the capital of Bern.

Swiss national TV considered the shutdown of the Mühleberg plant 15 kilometers near the capital Bern of such historical relevance that it broadcasted live the removal of the last control rod. This stopped the chain reaction and deactivated the reactor. The event followed a referendum but also an economic cost-benefit-calculation of its operator. BKW, which is 50 percent owned by the canton of Bern, would have had to spend 400 million dollars on renovation and safety over the next few years.

The reactions to the decommissioning start were mixed. Transport and Energy Minister Simonetta Sommaruga tweeted that the future belonged to local, clean energy from the water and the sun. Anti-nuclear activist group Greenpeace called the shutdown a historic success. But the lobby of Swiss nuclear power plant operators, Swissnuclear, lamented that Switzerland’s dependency on electricity imports from abroad has now increased.

The plant Mühleberg provided 5 percent of the electricity used in Switzerland. Its operator generated electricity in the reactor since its inception in 1972. Two of the four other Swiss nuclear power plants are even older: Beznau I and II near the German border began operation in 1969 and 1971, respectively, the plant in Gösgen started to produce electricity in 1979 and the one in Leibstadt in 1984.

The dismantling of the Mühleberg nuclear plant is scheduled to last until 2034. First, about 200 people will dismantle the equipment for producing electricity until October. Then, the main reactor building will be taken apart via remote control, decontaminated, and packaged. An interim facility in Würenlingen in northern Switzerland will accommodate the fuel rods. The overall costs are estimated to reach $1.4 billion. It is not yet clear how these costs will be covered.

Following the accident at the Japanese nuclear power plant in Fukushima in 2011, the Swiss Federal Council decided in principle to end the use of nuclear power with the passage of its “Energy Strategy 2050”. By the middle of this century, Switzerland wants to rely primarily on electricity from renewable energies. However, the strategy does not set a date for the shutdown of each federal nuclear power plant. The government refrained from this decision because the issue of nuclear power is discussed in Switzerland as controversial as it is in Japan.

In a referendum in November 2016, 55 percent of the electorate had rejected the proposal of a shutdown of all five Swiss nuclear power plants after a maximum of 45 years of operation. Also, the Federal Council opposed this so-called “initiative for an orderly exit from nuclear power”. But in May 2017, voters approved to phase out nuclear power in favor of renewable energy. No new nuclear plants will be built or operated. The Swiss parliament followed and passed a corresponding law.