Tokyo (SCCIJ) – The Swiss company giant Roche is celebrating its 125th anniversary this year. In terms of market capitalization, the Basel-based pharmaceutical group is leading in Switzerland together with Nestlé. Despite being a multinational corporation, Roche continues to focus on Switzerland as a business location. At its headquarters in Basel alone, two striking towers and other buildings are being constructed for CHF 3 billion. 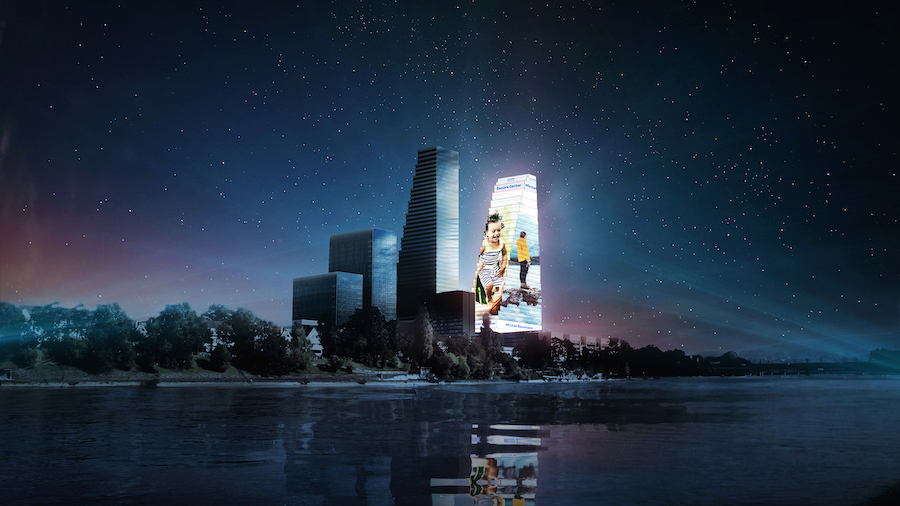 Celebrating 125 years of improving lives with an art installation on the Roche towers in Basel, Switzerland (© Roche).

The origins of Roche resemble the pandemic situation of today. Fritz Hoffmann, a young Swiss merchant from a wealthy family in the silk-ribbon manufacturing business, accepted a job in Hamburg, Germany, in 1892, when a devastating wave of cholera broke out. Almost 9,000 citizens died within a relatively short time.

For Hoffmann, it was a life-changing experience. The world needed to turn scientifically researched pharmaceutical compounds into medication, standardized in terms of dosage and effects, he concluded. With this vision on his mind, the 28-year-old founded F. Hoffmann-La Roche & Co in Basel in 1896. A syrup-based substance found in guaiac trees brought Hoffmann the first success.

After the Second World War, Roche kept bringing new, sought-after drugs to market, including Valium, a sedative still known around the world today. Also, the maker launched vitamin B and hair care products and entered the flavors and fragrances business. In the 25 years from the end of the war, sales rose from CHF 200 million to CHF 4 billion.

After a difficult period with lost patent protection and a serious chemical accident in Seveso, Italy, Fritz Gerber took over in 1978 and focused the company on pharmaceuticals, vitamins, diagnostics, and fragrances and flavors. In 1989, Roche went public at the Swiss Stock Exchange. By 1992, sales had risen to almost 13 billion Swiss francs.

During the first two decades of this century, Roche became one of the world’s largest pharmaceutical companies by targeting its operations on prescription drugs and diagnostics. Then CEO Franz B. Humer took the subsidiary Givaudan public and sold the vitamins and fine chemicals business. In return, he acquired a majority stake in the Japanese pharmaceutical company Chugai.

Today, Roche continues to stay in good shape. Recently, the company presented a lush development pipeline to analysts and investors. A total of eighteen drugs are either in Phase III trials or in the approval process. Ten new Phase III trials are planned for the current half of the year. Also, Roche just received Breakthrough Therapy Designation from the U.S. health authorities for its Alzheimer’s disease candidate gantenerumab.

The timeline of Roche’s history can be downloaded here.