Tokyo (SCCIJ) – Up to 40 participants watched the SCCIJ webinar about the responses to the COVID-19 pandemic. Eminent Japanese scholar Kenji Shibuya, the Director of the Institute for Population Health at King’s College London, analyzed the strategies against the spread of the new Coronavirus and compared Britain and Japan in particular. Full recording available here! 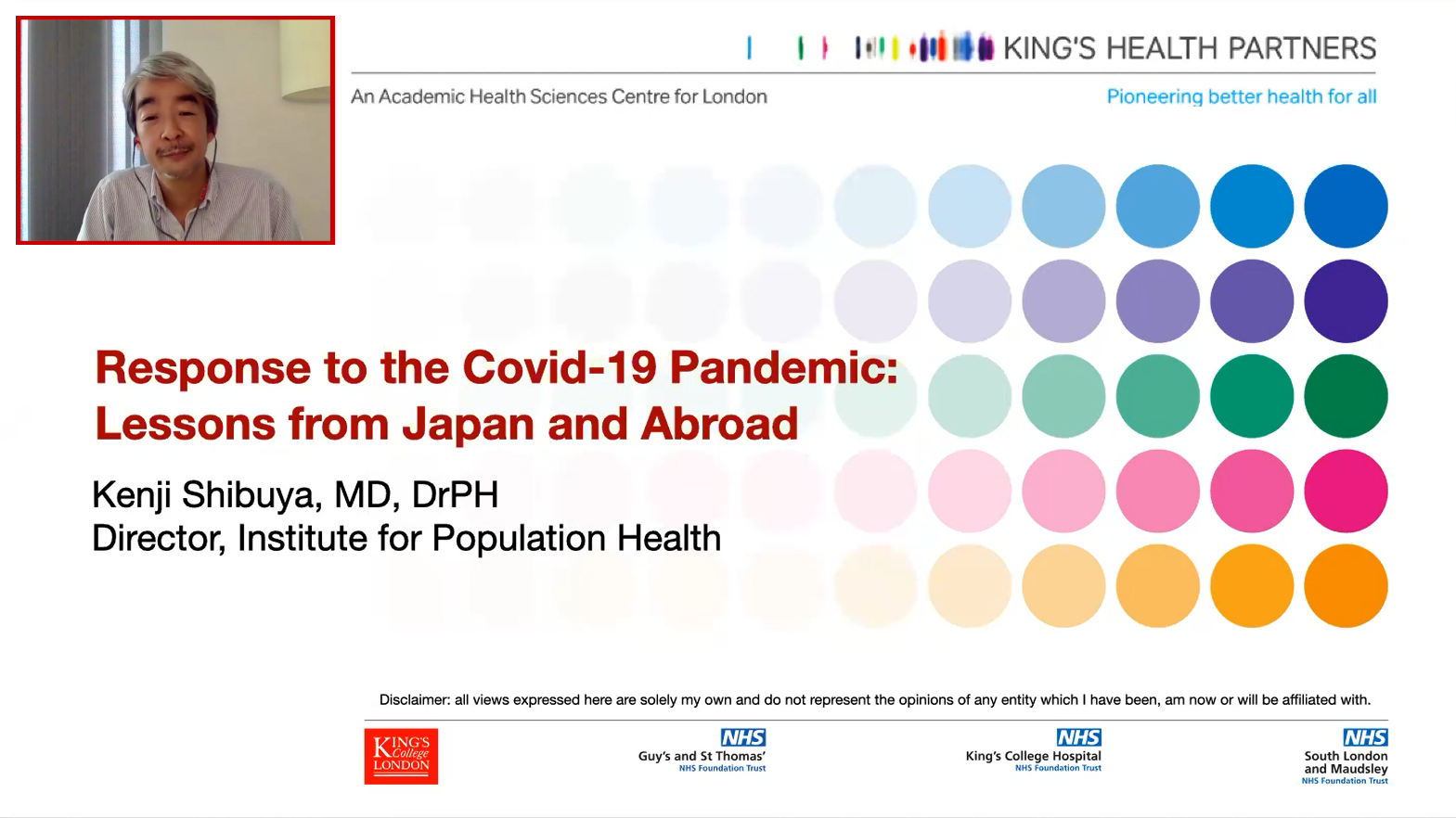 Dr. Shibuya started with a country ranking of the responses to COVID-19 done by the Lowy Institute in Australia. Measured by six factors such as total confirmed cases and total deaths, Japan ranked #45 and Britain #66. “But Japan is now lagging behind the UK by two to three months in terms of the most recent infection wave due to new variants,” the webinar speaker argued. The approach of the British government would now pay off: It was the first country to approve a vaccine, nearly 60% of the adults have already received at least one shot. It has also expanded testing to over 1 million per day. In contrast, Japan would be far behind in both testing and vaccinating.

The webinar speaker highlighted the three basic approaches to infection control which have not changed for the last 100 years. First, disrupt the route of transmission, e.g. by wearing a mask, washing hands, and keeping social distance. Second, identify and remove the source of infection. This approach requires mass testing and quarantining infected people. Third, increase the host immunity through vaccination.

“The main approach of Japan is to disrupt the transmission route but the vaccination progress is kind of gloomy,” Dr. Shibuya commented. According to an independent investigation commission on the government’s response to COVID-19, the strategy mainly relied on luck and people’s efforts. In contrast to other countries, there was and is no widespread testing. “The current amount of 100,000 daily tests is very low and was even declining recently,” the speaker stated.

Dr. Shibuya turned the attention of the webinar viewers to the five lessons learned from exit strategies. “What matters, are trust, clear communication, active case finding, a resilient public health system, and a long-term strategy,” he said. But Japan would suffer from several handicaps. “In terms of vaccination quota, Japan is currently at the level of Myanmar which is quite shocking.” The vaccine rollout would be delayed because Japan relies on imports. Also, it has a history of vaccine lawsuits which makes bureaucrats and policymakers very cautious. Finally, the pharmaceutical industry suffers from fragmentation and lacks competitiveness.

“When I was an advisor to the government, we warned in 2016 that Japan is not ready to tackle a pandemic but nothing happened,” the speaker recounted. Now, the current complacency of the government about a successful “Japanese model” may lead to failure without mass testing and vaccination. “I do not think it is sustainable to rely on people’s effort alone because Japan lacks a long-term vision to tackle COVID-19, including vaccination strategy and R&D capacity,” Dr. Shibuya warned.

The speaker also questioned the perception that the pandemic may vanish through reaching herd immunity. “We do not know how long the immunity through vaccination will last which may make regular vaccine boosters necessary,” he said. Also, many countries have not been rolling out vaccines yet. “We probably need to continue mask-wearing and social distancing for the next couple of years,” he warned. As a result of these insights, he recommended a “Zero COVID” solution. “There is no trade-off between infection control and the economy – unless you have the confidence for economic activities, there will be limited economic activities.” Therefore, it would be essential to suppress COVID-19 as much as possible.

During the exit phase from lockdown or state of emergency measure, the number of new cases should be kept very low and maintained by massive test-trace-isolate scheme and vaccination. “Considering this approach, I am very worried about the situation in Japan because it has not yet suppressed the community transmission and does not expand testing and does little vaccination.”

Dr. Shibuya finished with a comparison between COVID-19 and the nuclear accident in Fukushima. He quoted from the independent investigation report about the accident which attributed its fundamental to ingrained conventions of the Japanese culture. “The same belief in Japanese exceptionalism is also observant in the response to COVID-19,” the speaker finished.

Prof. Dr. Kenji Shibuya is currently Director of the University Institute for Population Health at King’s College London. He has been an advisor to both central and local governments and was recently appointed as Special Advisor to the Director-General of the World Health Organization and a member of the Scientific Advisory Committee of Coalition for Epidemic Preparedness Innovations, a new pandemic vaccine fund investing in COVID-19 vaccines. He obtained his MD at the University of Tokyo and earned a doctorate of public health in international health economics at Harvard University.