Tokyo (SCCIJ) – About 40 members and guests of the SCCIJ tuned into the March webinar about the situation in Fukushima held by the radioactive waste consultant Ian McKinley based in Zurich, Switzerland. The webinar took place on March 11, the tenth anniversary of the triple disaster of quake, tsunami, and reactor meltdowns in North-Eastern Japan. Switzerland and Japan have been cooperating closely in the field of radioactive waste for decades. Full recording available here! 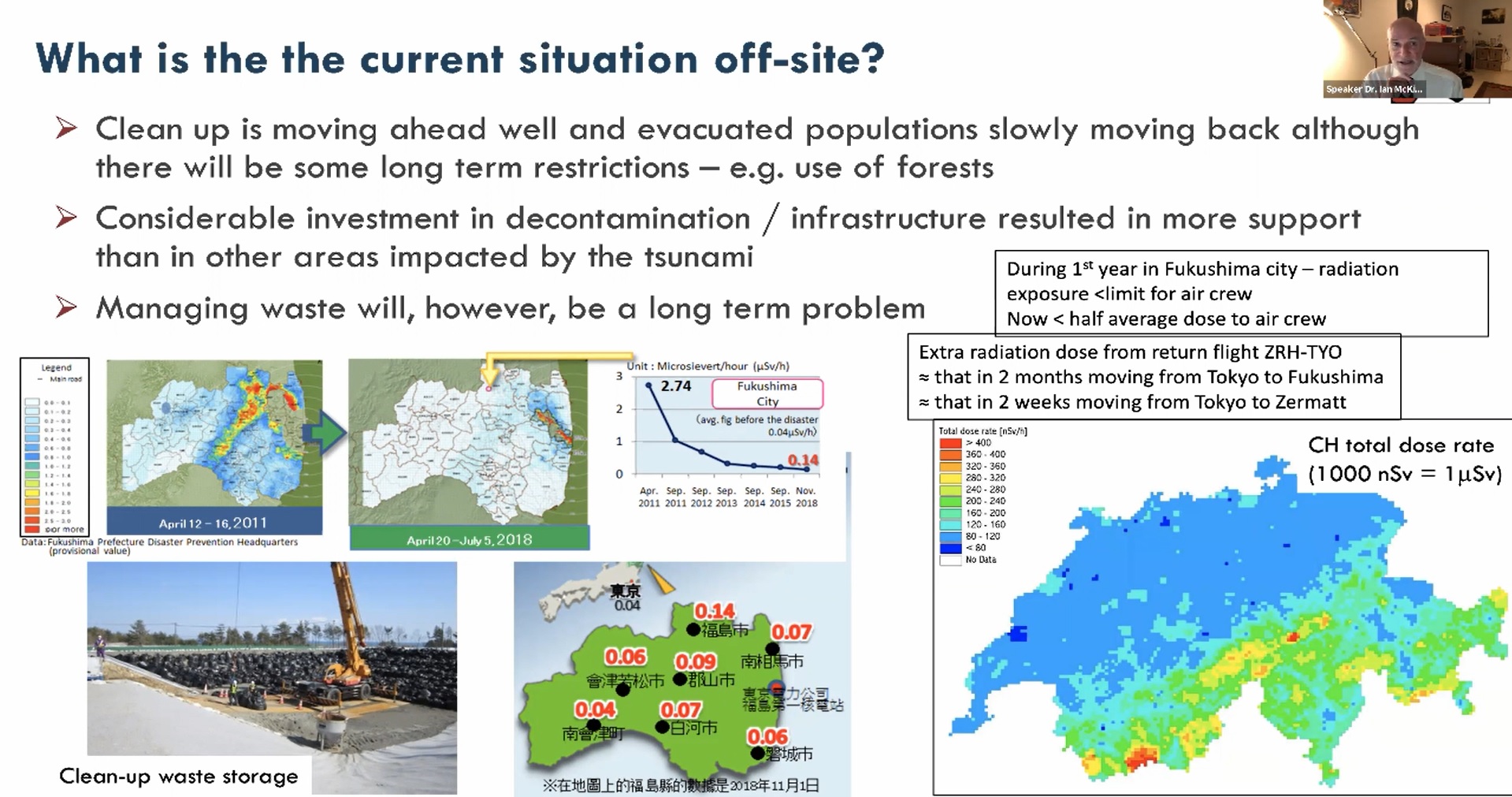 In his introduction, the speaker emphasized the differences between the two biggest nuclear accidents of the last 35 years. In Chernobyl, the reactor core itself exploded with highly radioactive substances spread around the plant. Thus, a permanent exclusion zone became necessary and a cleanup was never attempted, Mr. McKinley reported.

In Fukushima, exploding hydrogen gas released from the reactors spewed mainly radioactive Cesium and Iodine into the environment. However, more than two-thirds of the released radioactivity drifted onto the Pacific. The nuclear fuel, although melted, is still contained within the reactors. “Therefore, the main challenge in Fukushima is to clean up the contaminated soil and make sure that people can safely return,” the expert stated.

The situation has improved in the course of the last ten years. “Radiation in Fukushima decreased by a factor of about 20,” he explained. Most contaminated until today are natural organisms like mushrooms that grow in the forests of Fukushima. “But this is also true for mushrooms in Northern Italy or the Swiss Alps due to the Chernobyl accident.”

Mr. McKinley compared the situation in Fukushima to Scotland that was also contaminated with Cesium in the past. The reasons were a fire in a reactor in Windscale and the release of radioactive waste from a spent fuel reprocessing plant into the sea. “Many people feel that Fukushima is unique and very hazardous but other areas in the world have been contaminated to a similar level.” Besides, a passenger on a return flight from Zurich to Tokyo receives the same amount of radiation as when staying two months in Fukushima or two weeks in Zermatt, Switzerland.

In the next part of the webinar, the speaker looked at the developments at the nuclear plant Daiichi itself, in Japan known as “1F” or “ichi effu”. “Onsite, it is not looking so positive,” he said. One problem is the continued leakage of water into the damaged reactors. “They decided to build an ice wall to reduce the groundwater entering the buildings but this did not work very well.” Overall, the Japanese plan to decommission the damaged reactors within 30 to 40 years looks “a little ambitious”.

“Japan can develop the robotic technology and has enough money to do this but if you leave the reactors for a while, it will be easier and less costly to decommission them,” Mr. McKinley explained. For example, the Windscale nuclear plant was sealed after the 1957 fire and may only be decommissioned in 2037. The main reason: The natural decay of radioactive material after 80 years makes the decommissioning effort less difficult and dangerous.

Finally, the expert discussed the overall distorted perception of the Fukushima accident. “Many articles were sensationalist and exaggerated the radiation risk,” he said. Among such misinformation were mathematical models predicting 100,000 deaths in Fukushima due to the radiation. “The accident was terrible but nothing like as serious as portrayed in the media,” he ended the webinar. “But, of course, we need to learn from it and reduce risks in the future.”

Dr. Ian McKinley has worked for over four decades in the multidisciplinary science underpinning radioactive waste management. After studying marine releases of radioactivity in Scotland and supporting the British nuclear waste disposal program, he moved to Switzerland in the mid-’80s. In addition to projects for a Swiss repository, he has collaborated intensively with colleagues in Japan for three decades, spending time as visiting professor at Nagoya and Okayama Universities. After the Fukushima Daiichi accident, his team worked with JAEA to assess contamination, develop remediation projects and evaluate long-term options for the 1F reactor site.