Tokyo (SCCIJ) – USM Japan has opened the photo exhibition “de glacierum natura” by the Swiss artist Daniel Schwartz at its showroom in Marunouchi, Tokyo. The photographs show glaciers in Switzerland, in Pakistan, Peru and Uganda, what they are, what they do and how they are faring. The work group will be on view until September 30. Ms. Yuriko Akiyama, President of USM Japan, welcomed about 80 guests at the opening reception in the showroom and introduced the artist and his works. “Sustainability is an important element for USM’s business and it is our pleasure to have this exhibition in our showroom in Tokyo, too,” Ms. Akiyama said.

Mr. Jean-François Paroz, the Ambassador of Switzerland to Japan, who was accompanied by his wife, Dr. Yulia Gusynina Paroz, explained in his short speech the connection between the exhibition topic and the exhibitor USM: “The beauty of Switzerland’s nature, and the excellence of Swiss innovation, are both pillars for the promotion of the image of our country.” Swiss design, which has established itself as a landmark of modernity, simplicity and functionality, would constitute an important bridge with Japan, another nation of great craft and creativity, the ambassador said. 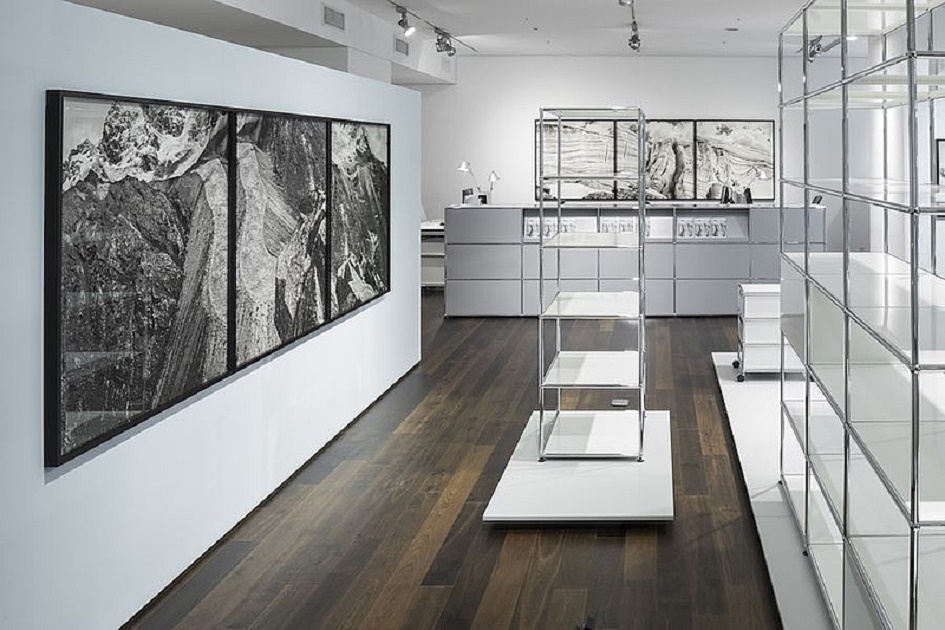 “As a global player in this field, USM has done a lot for the reputation of Swiss made design,” he added. Nature too would constitute a fantastic asset for Switzerland. “This exhibition reminds us how much the preservation of our landscapes and natural resources must be a top priority,” Mr. Paroz explained. The ambassador used the occasion to announce that nature and design will be at the heart of Swiss activities in Japan on the road to 2020 to the Olympic and Paralympic Games of Tokyo. 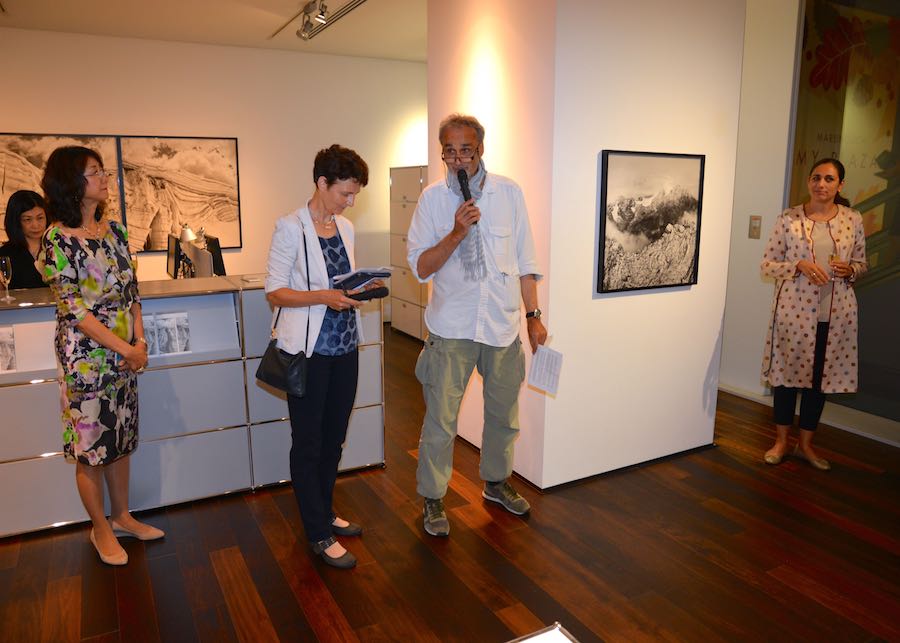 In his own speech, photographer Daniel Schwartz thanked Brigitte Plüss Medici and Roberto Medici for the curation of this series of work from the glacier project for the art collection of the USM foundation. The Swiss furniture company has organized a tour of the exhibition through global showrooms and also supported production of the book “while the fires burn. A glacier odyssey”. “To this extent support (for artists) rarely happens,” Mr. Schwartz stated. “We must bow before patrons who are generous towards art that has a meaning.”

The series combines photographs that Daniel Schwartz realized in Switzerland in 2014 with new works that were created in autumn / winter 2015/16 in Pakistan, Uganda and Peru. Glaciers form a dynamic system. Due to the climate change caused by humans, they rapidly lose their area and mass. With consequential consequences, because glaciers are reservoirs of the limited resource “water” and an archive of climate history. 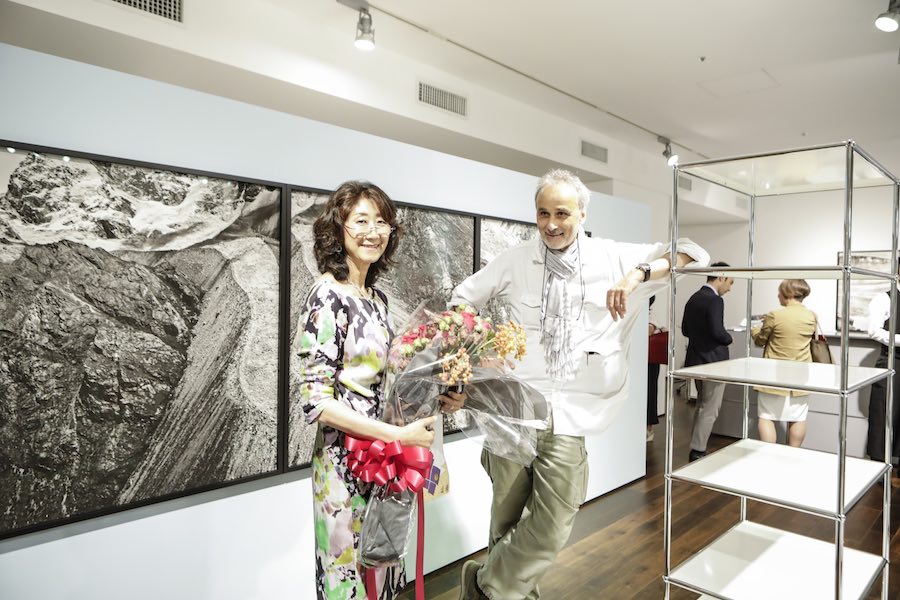 Daniel Schwartz depicts the glacier as a place of remembrance, confronting loss while revealing the past, and at the same time as a scene that, with its loss, exposes the future. “De glacierum natura” is part of the project “ICE AGE OUR AGE”, which was started in 2009, and combines visual art with natural sciences. Tokyo is the final destination of this exhibition after touring all the other USM’s own showrooms in the world as a corporate event.

The “changing global environment” has been the theme of Daniel Schwartz’s work for more than 25 years. For this exhibition, some photographs of glaciers were specially selected. “During the exhibition, we exhibit only white USM furniture to match the glacier photographs,” USM Japan President Akiyama explained at the opening reception. 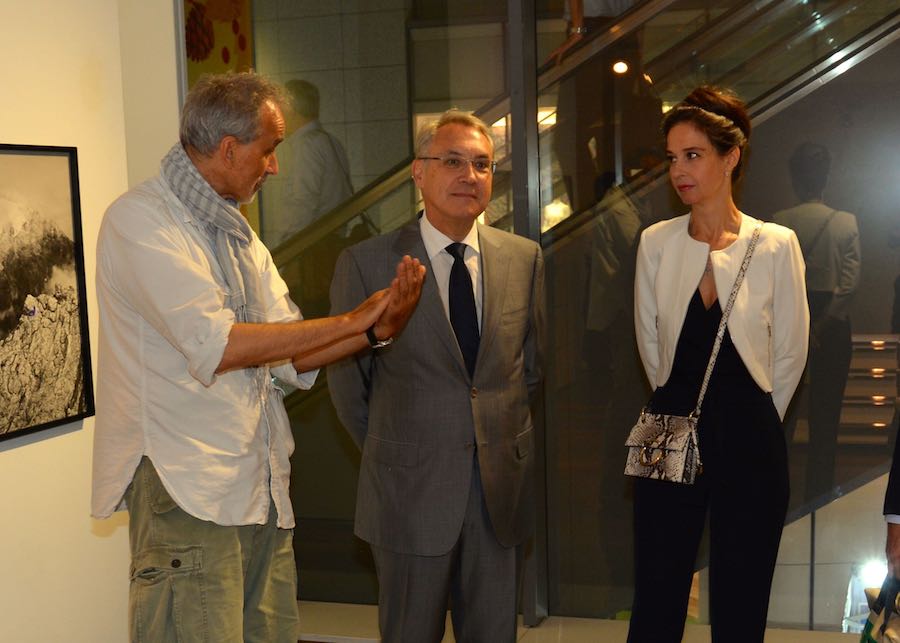 The Swiss Daniel Schwartz is a photographer and author. He was the first foreigner to document all known sections of the Great Wall of China (“The Great Wall of China”, 1990, revised extended edition 2001). Between 1990 and 2005 he worked for the cultural magazine du and as a freelance photojournalist in numerous crisis areas.