Tokyo (SCCIJ) – The Swiss startup Agile Wind Power has started the trial operation of its first “Vertical Sky” wind turbine at a test field in Germany. This game-changing turbine which already produces electricity is quieter, more environmentally friendly and better suited to decentralized energy markets. Due to its unique properties, it would also fit the Japanese power market where scarce and expensive space constrains the deployment of wind turbines. 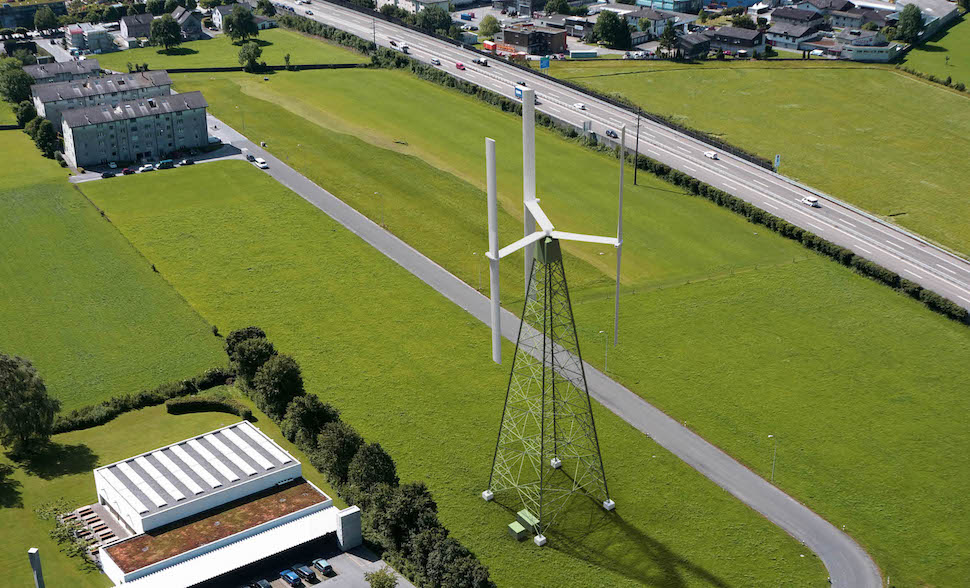 The design of a rotor with fixed vertical blades is nothing new. Already the Babylonians used this technology to pump water. However, previous systems have always been small. “We have found a way to scale them up into megawatt ranges,” explained founder and CEO Patrick Richter. Experts have confirmed that his unique approach has many advantages compared to conventional turbines.

The first large wind turbine by Agile Wind Power outperforms conventional horizontal-axis wind turbines in distributed energy markets. The revolutionary core of the Vertical Sky technology is the continuous rotor blade pitch control. In real-time, it self-optimizes the rotor blades during operation. The first product type has a rated output of 750 kW, a total height of 105 meters, and a rotor diameter of 32 meters.

The background of this technology: Currently, distributed energy systems are gradually approaching densely populated areas or require long-distance electricity transport systems. Thus, the energy market needs more locally generated power at reasonable prices. The Vertical Sky technology fits these needs: The blades do not have to be adjusted to the wind direction and suffer from less material fatigue.

Besides, this turbine produces less noise which allows putting it up much closer to houses. As a result, they can be installed in more locations and closer together in wind farms. A windmill with a vertical axis is comparatively smaller and thus less visible in the landscape. Also, birds and bats recognize the vertically oriented blades, regular turbines often kill them.

For the population, acceptance of wind energy plants is linked to relevant aspects: Besides a low visual impact and low noise emissions, there should be no environmental impact, no road construction for the transport and installation, and no disturbance by operation and maintenance. Conventional wind turbines do not fulfill these criteria and are therefore not suitable for the development of populated areas.

“We are orienting ourselves to the market and want to contribute to ensuring a secure and reliable supply of clean energy shortly, independent of finite energy sources”, says founder Richter. After training as an electronics engineer, the Swiss studied business informatics. In 2001, he founded an IT company, which he sold again in 2009, and invested the proceeds into his wind power company.

Since 2010, Agile Wind Power researches and develops its technology in Dübendorf near Zürich, Switzerland. The startup has chosen the North German town Lemwerder for the production of the space-consuming rotor blades. Also, the region is home to many wind energy companies and thus has qualified specialists. But the Swiss research & development team remains in Dübendorf.