Tokyo (SCCIJ) – A just founded start-up from Switzerland is revolutionizing the global battery market with its series-produced solid-state battery and a gigafactory production plan. Swiss Clean Battery AG, based in Frauenfeld in the St. Gallen-Bodensee area, is convinced that its environmentally friendly, application-safe and extremely powerful product will leave the international competition behind. 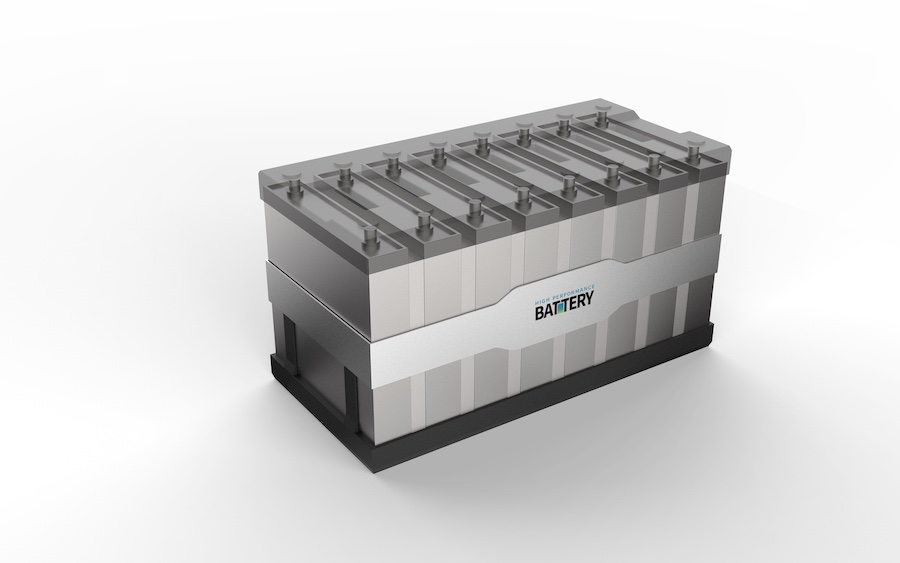 An illustration of the Swiss solid-state battery to be built in a Gigafactory (© High Performance Battery).

A gradual build-up of a production facility is taking place, with the first phase in the order of 1.2 GWH with a planned turnover of CHF 318 million, CHF 246 million investment volume, 181 employees and an enterprise value of CHF 1.3 billion. In the final phase, the new company is expected to produce 7.6 GWH, with an investment sum of CHF 775 million, a turnover of CHF 2 billion and 1061 employees.

Lithium-ion batteries have revolutionized the battery world. However, research is being carried out feverishly around the world to replace conventional lithium-ion batteries with solid-state batteries as a new basic technology. The reasons: The service life of lithium-ion batteries is limited, and they continuously lose power during charging and discharging. It decreases the more a battery is used. They are also flammable and have a poor environmental footprint. Critical raw materials are used, such as cobalt.

The solid-state battery to be produced by Swiss Clean Battery (SCB) lasts almost indefinitely, maintains an almost constant power output and is 50% better in terms of environmental balance than conventional LI batteries. Furthermore, it is non-combustible and therefore safe and contains no critical raw materials, such as cobalt. This battery is developed by High Performance Battery, another Swiss start-up based in the eastern part of the country.

SCB AG, as the production company, has acquired the license from this development company to produce the rechargeable batteries. The predecessor technology of the solid-state battery – still on a liquid basis – has already completed more than 50,000 charging cycles in practical use in the USA in a battery storage system for buffering the power grid. This liquid predecessor technology has already been produced on an industrial scale.

So far, it has not been possible to develop high-performance batteries with pure solid ion conductors which replace conventional liquid electrolytes. A central, technical problem is to bring the fixed ion conductor in the battery cells into a stable connection with the electrodes. After more than 30 years of basic research, it has now been possible to solve this problem.

Many research projects are based on a “modular design” – individual parts are combined outside the cell and inserted into the housing. But technical problems occur between anode, solid ion conductor and cathode. The Swiss solid-state battery is different: Here, the fixed ion conductor is formed in the battery cell itself, similar to a “multi-component adhesive“. This design overcomes these transition problems compared to component logic.