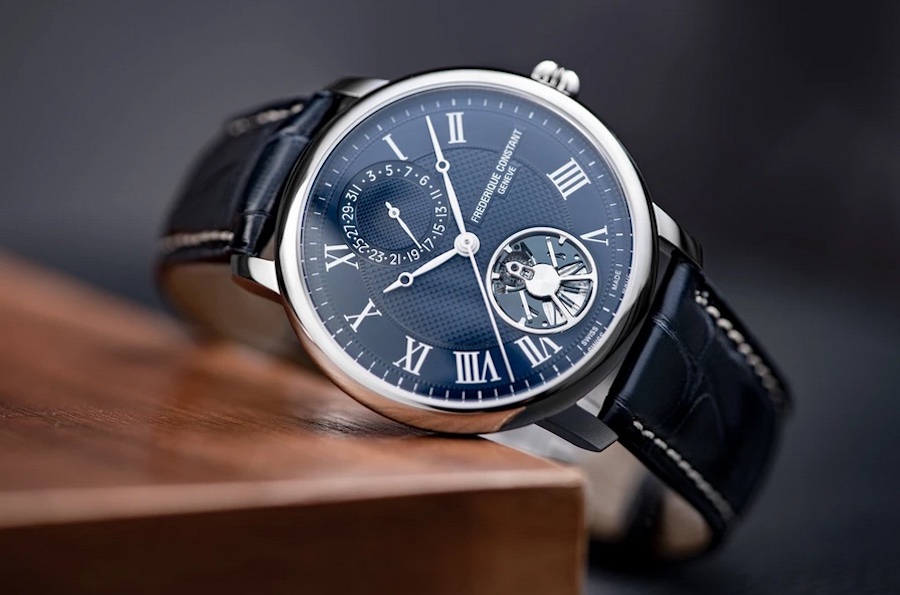 Marking a world premiere, the Swiss watch house presented a silicon oscillator beating at an unprecedented pace of 288,000 vibrations per hour, or 40 Hz. Redefining the principles of mechanical watch regulation, the Slimline Monolithic Manufacture ticks ten times faster than most mechanical movements.

Thanks to its design and reduced size, this revolutionary high-frequency oscillator fits inside a traditional movement configuration. The 40mm Slimline Monolithic Manufacture is the proud recipient of this groundbreaking oscillator, the first watch in the world to boast a 40Hz frequency combined with a price that reflects the brand’s commitment to accessible luxury.

The idea behind the new oscillator was born three years ago during an encounter between Peter Stas, co-founder of Frederique Constant, and Nima Tolou, founder and CEO of Flexous. The start-up was founded in 2012 in Delft, The Netherlands, as a spin-off of an internationally leading group in the field of flexible mechanisms at Delft University of Technology.

Frederique Constant team commissioned Flexous with the production of a unique, flexible oscillating system. The technical mandates were clear: a size comparable to that of a traditional balance; the highest possible frequency; an 80-hour power reserve; and a cost-effective formula allowing the manufacture of significant quantities at a reasonable price.

In the new watch, Frederique Constant replaces the 26 components of a standard assortment with a single component fitted with two regulation weights. Thanks to a new geometry of flexures and masses, the size of the oscillator (9.8mm diameter x 0.3mm thickness) was substantially reduced to match for the first time that of a conventional regulator.

Another factor that kept the dimensions in check and create an ultrathin oscillator and to keep all functions in one thin silicon layer was the integration of the anchor system in the flexures. The third innovation responds to the adjustment weights used to regulate the flexure oscillator, just like the system used in a traditional free-sprung balance. This feature allows watchmakers to fine-tune the frequency with exceptional ease.

The oscillator is made of monocrystalline silicon, a material that eliminates key weaknesses of traditional sprung balances. Monocrystalline silicon is 100% anti-magnetic, resilient to oscillations in temperature, less sensitive to gravity, and four times lighter than a regular assortment. The absence of mechanical coupling means a lower generation of friction and wear on the parts. Consequently, less power is needed to drive the escapement wheel and the oscillating system. Finally, yet importantly, silicon does not require lubrication, which enhances the long-term reliability of the escapement.

Also, Frederique Constant’s watchmakers designed a new base movement – automatic caliber FC-810, because a traditional gear train cannot cope with the breakneck speed of a 40Hz regulator. Capable of performing with the speed of the new silicon oscillator, the caliber also delivers a substantial 80-hour power reserve.

Text: Martin Fritz for SCCIJ, with material of Frédérique Constant