Tokyo (SCCIJ) – For the first time, managers and experts of the Swiss construction chemicals group have demonstrated their proprietary groundbreaking concrete recycling process at a huge test facility in Zurich. The concept under the brand name “reCO2ver” can be considered a breakthrough in concrete recycling and has the potential to significantly contribute to a more sustainable, decarbonized, and circular economy. 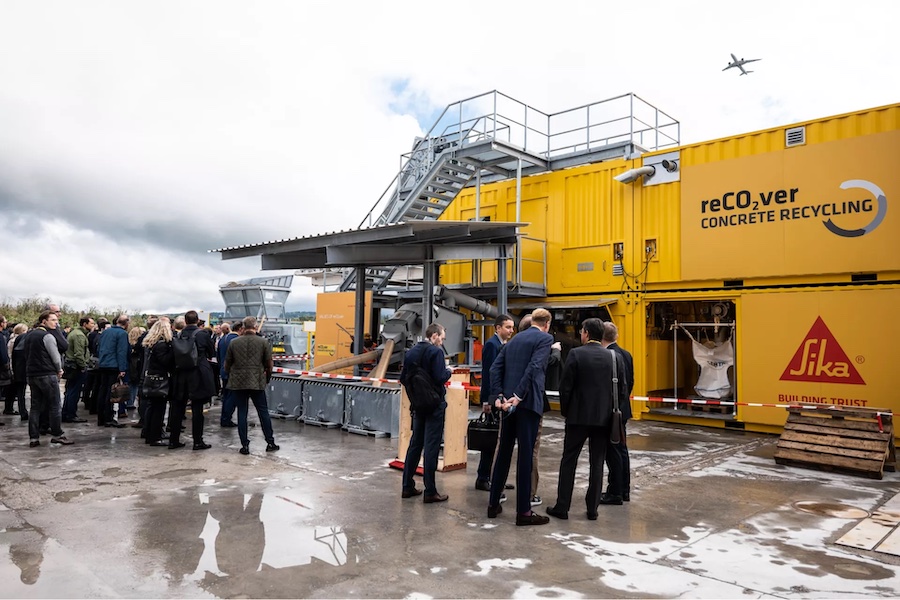 Sika presented the concrete recycling plant for the first to the public (© Sika).

Sika built the multi-story pilot plant on the site of the Kloten-based construction company Eberhard. It separates old concrete into qualitatively equivalent individual components of pebble, sand, and limestone, and binds carbon dioxide (CO2) through a chemical process. This saves cement, and money can be earned with the captured CO2.

The waste concrete is first crushed in a mill and CO2 is added. One potential source for the greenhouse gas are sewage treatment plants. The milling results in separated sand, pebbles, and powered powdered limestone. This product binds the CO2. Due to its cementitious properties, it can be used as a substitute for fresh cement, thus improving the carbon footprint of concrete from such material.

At the heart of the patented process is a chemical additive that binds around 60 kilogram CO2 per ton of recycled concrete. As a result, the CO2 footprint of the new concrete made from recycled materials is reduced by around 40%.

Towards a circular production

So far, Switzerland only recycles about 10% of used concrete. But this share has to go up to make the construction of concrete buildings from houses to bridges and roads more climate-friendly. The more old concrete is recycled, the less fresh concrete is needed. This reduces the consumption of sand and pebbles and releases less CO2.

But Sika also expects to benefit financially from its initiative. First by selling the process chemicals and secondly by licensing the technology. The first revenues are expected toward the end of 2022.

In the next step, Sika and development partner Eberhard want to implement the concept on an industrial scale. Such a recycling plant must be able to process 50 to 200 tons of old concrete per hour, whereas the pilot plant despite its large dimensions manages only five tons per hour. The first industrially usable plant must therefore be at least ten times larger.

But commercial operation may not begin before 2023, because the makers of the plant have currently a limited capacity. Sika is giving itself six to twelve months to optimize the process and make adjustments for scaling. In Switzerland alone, around ten companies have expressed interest to acquire a plant and use it for concrete recycling, the Swiss paper NZZ reported.

The first commercial plant will be commissioned by Eberhard. The family-owned company operates the largest recycling plant for construction waste in Switzerland. With Zirkulit, the company carries its own “green” concrete in its product range. According to its inventor, Zirkulit is the first “circular” concrete in Switzerland. Ten kilograms of CO2 are bound per cubic meter by using 75% recycled raw materials and through a special production process.