Tokyo (SCCIJ) – The Swiss Chamber of Commerce and Industry has officially welcomed the new Ambassador of Switzerland to Japan, Dr. Andreas Baum, who also carries the title of SCCIJ Honorary President. The occasion was the annual SCCIJ Kansai dinner reception attended by more than 30 members and guests of the chamber. Dr. Baum was on his first business trip to the Kansai area since taking up his post in October. Due to restrictions to prevent the spread of Covid-19, the SCCIJ Kansai had to forego the customary corporate excursion which normally precedes the dinner reception. 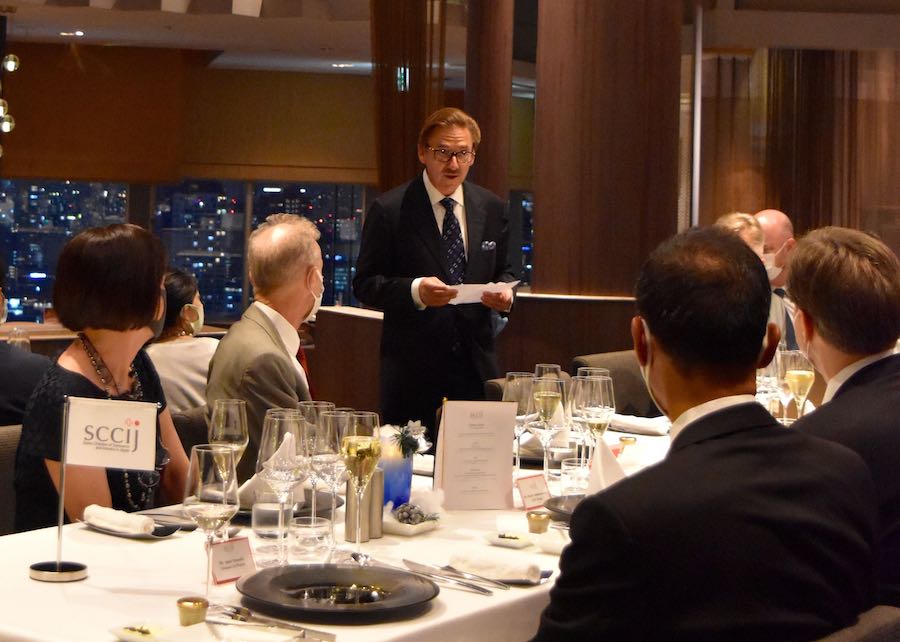 Dr. Andreas Baum, the new Ambassador of Switzerland, speaks at the SCCIJ dinner reception in Osaka.

Andre Zimmermann, President of the SCCIJ, warmly greeted the new ambassador as well as the other participants of the dinner reception at the elegant restaurant Tavola 36, located at the top of Swissôtel Nankai in Osaka. For the benefit of all guests and members, he briefly reviewed the activities of the Swiss chamber during this year.

The SCCIJ President stressed the importance of the Kansai chapter and highlighted the traditional annual gathering of the Executive Committee in Osaka. It is usually combined with a company visit and a dinner reception for SCCIJ members and guests. He explained that the plan for a company visit had to be shelved this year and thanked Guenter Spiess, Vice-President Kansai, and his colleagues for organizing the dinner. 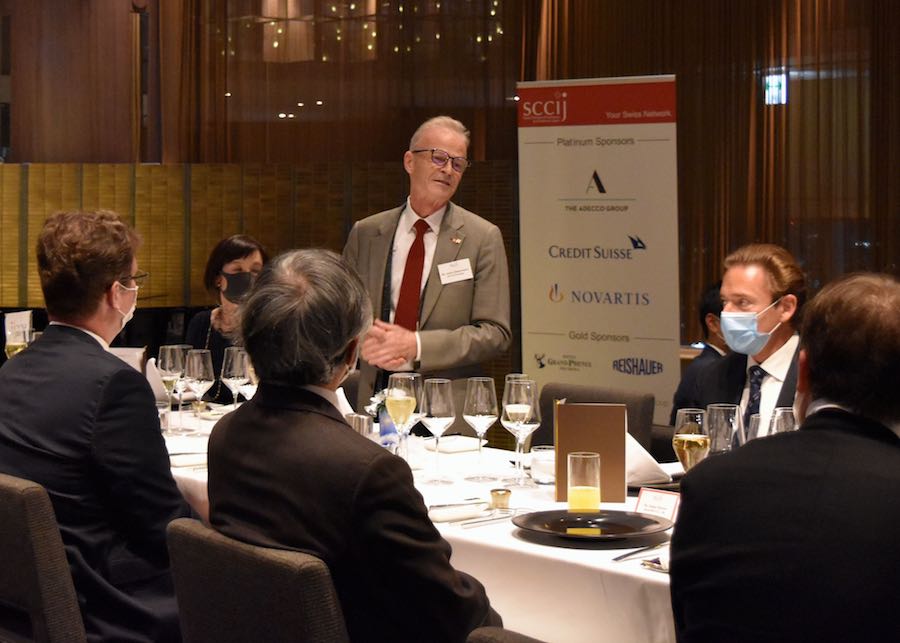 Swiss ambassador Dr. Baum began his first speech at an official SCCIJ event by expressing his great pleasure to attend the gathering. Kyoto has been the only other place in Kansai he has visited as a tourist ten years before. He underlined his intention to come back to Kansai on future occasions. The ambassador mentioned that he has never before been an honorary president of any organization. “Hence, I feel privileged to carry this title and will do my very best for the SCCIJ,” he said.

Dr. Baum briefly touched upon previous postings, explicitly on the last one as Ambassador to India and Bhutan since 2016. Before this, he acted as Ambassador of Switzerland to Israel (2012-2016), to Nigeria, Chad, and Niger (2008-2012), and Minister and Deputy Permanent Representative at the Mission of Switzerland to the United Nations in New York (2004-2008). He holds a Doctorate in Medicine from the University of Lausanne and a Master of Arts in International Relations and International Economics from Johns Hopkins University. 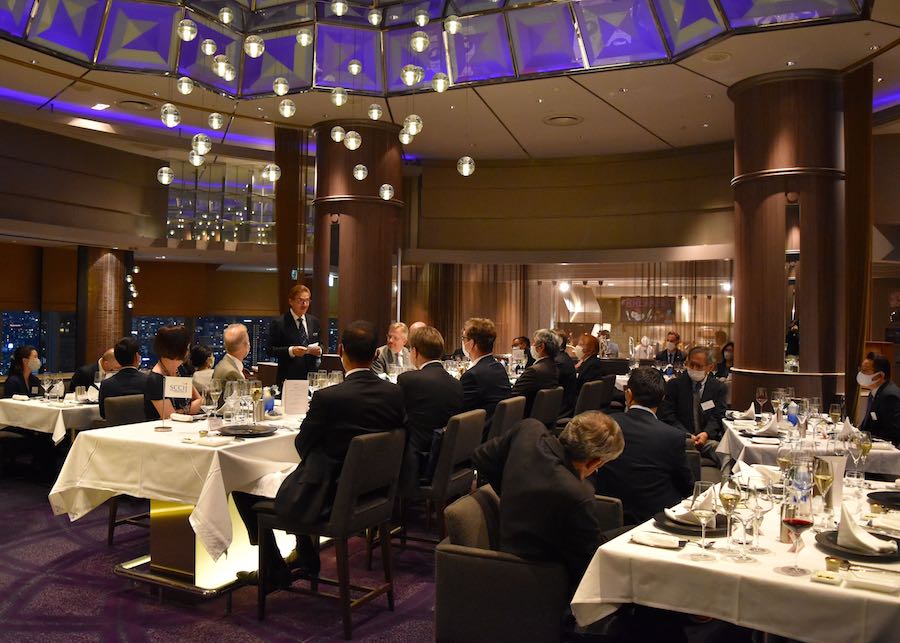 More than 30 SCCIJ members and guests attended the welcome dinner for the new Swiss Ambassador.

In his welcome speech, the Swiss Ambassador also recounted the memorable day of November 19, 2020, when, accompanied by members of the Embassy team, he had the privilege to present his credentials to his Majesty the Emperor, who welcomed him with much warmth and kindness.

Mr. Spiess as SCCIJ Vice-President Kansai thanked Dr. Baum for his welcome speech and presented him with a special “Kansai gift” bag. It contained a sake from Nada-ku in Kobe as well as locally-flavored KitKat chocolate from Nestlé. The Swiss corporate giant has its Japan headquarters in Kobe. 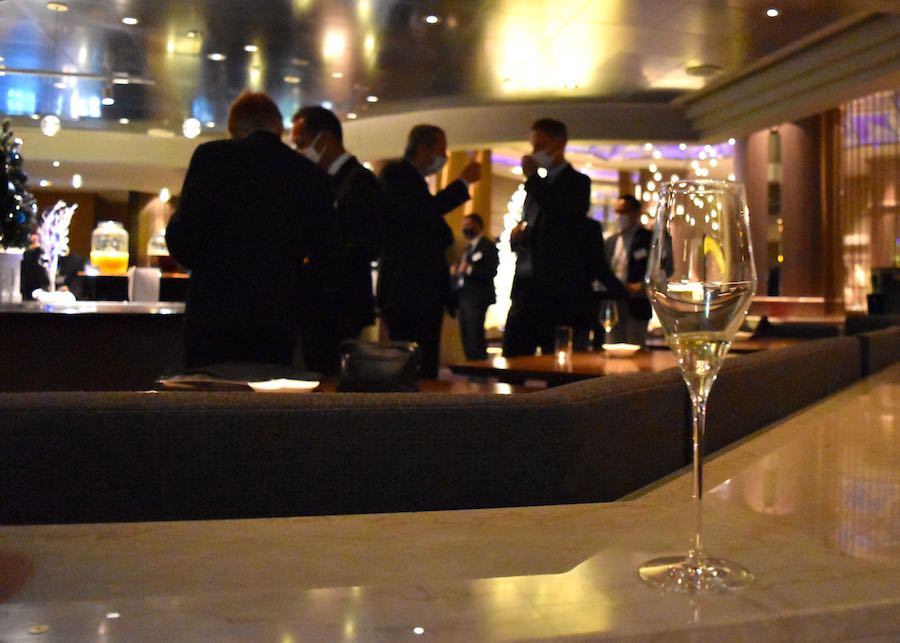 The Swissôtel Nankai in Osaka created a festive atmosphere at the annual SCCIJ Kansai dinner.

After a long Kampai toast, a delicious dinner course menu with Swiss-inspired fusion dishes was served and accompanied by a harp player. A special thank you of the SCCIJ organizers went to the Swissôtel team for the great hospitality and service. The hotel’s general manager Fraser McKenzie who joined the dinner is a member of the SCCIJ Executive Committee.

Text: SCCIJ based on a report by Dieter Sommerhalder; Pictures: © SCCIJ