Tokyo (SCCIJ) – The Swiss mechanical and electrical engineering industries (MEM industries) have recovered remarkably well from the severe shock caused by the removal of the EUR/CHF floor by the Swiss National Bank in January 2015. In the first half of 2018, the index values for new orders and sales reached their highest levels in ten years. Also, capacity utilization among MEM companies reached 91.9% in the second quarter, which is well above the long-term average of 86.4%. The positive business trend is expected to continue for another six to twelve months. Thereafter, a slowdown in the economy is a possibility. 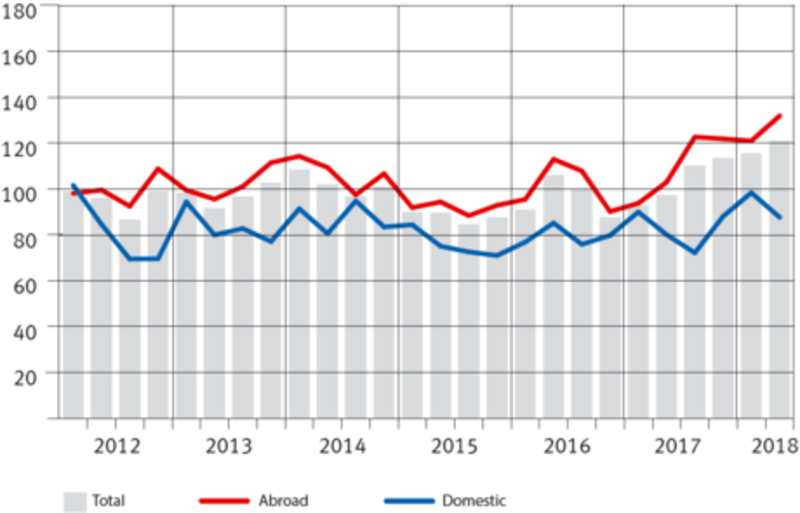 According to figures from the Swiss Customs Administration, exports by the MEM industries rose by 7.5% year-on-year in the first half of 2018. Total merchandise value was CHF 34.8 billion. Higher exports were achieved in all key sales markets and product sectors. Exports to the EU (+9.1%) and the USA (+7.3%) performed particularly well.

The growth in exports to Asia was considerably weaker (+1.5%). Although exports to China increased by 10.8%, a fall in exports to the other Asian countries, and to the Middle East in particular, nevertheless dragged down the overall result for Asia. Looking at individual product segments, metal industry exports rose by 11.1%, mechanical engineering exports by 9.2%, precision instruments exports by 7.9%, and electrical and electronics exports by 7.0%.

Overall, the Swiss MEM industries are in a very good position. This is also having a positive impact on employment. In just one year, the MEM industries have replaced two thirds of the jobs that were lost when the minimum exchange rate was scrapped.

Hans Hess, President of Swissmem, says: “I am delighted that the situation has improved again for the great majority of MEM companies. I am confident that the positive business trend will continue for another six to twelve months. After that, there is a possibility that the economy may slacken, particularly since early-cycle sectors are already noticing a slowdown in growth.”

Swissmem members agree with this assessment. According to the latest survey, 51% of companies are expecting orders from abroad to remain much the same in the next 12 months. By contrast, the number expecting orders to increase fell by 12 percentage points between the first and second quarters of 2018 (Q1/18: 48% / Q2/18: 36%).

One of the biggest challenges the Swiss MEM industries will face in the next few years is the shortage of skilled labor. Swissmem is therefore working intensively on its retraining initiative, which enables adults who have completed basic training in one occupation to undertake further training in another field of work.

Moreover, the MEM industries’ new collective employment agreement features a number of measures for staff development and training designed to enhance the sector’s appeal as an employer. It also contains recommendations as to how young people, women and older employees can be given specific support and help in reconciling family and career. All this is aimed at ensuring that the MEM industries can rely on having sufficient qualified personnel in the future too.