New SCCIJ President: A vision for our chamber

Tokyo (SCCIJ) – Mr. Andre Zimmermann, the new SCCIJ President and also Representative Director of Lindt & Sprüngli Japan, has laid out his vision for the chamber’s future at the February Luncheon. He impressed 40 members and guests of the Swiss chamber with frank words about his life and by introducing a new luncheon style: The setting became cozier through a reduction of the room size, all luncheon participants were personally greeted by the President at the entrance door and the event was started personally by him with a loud ring of a bell.

The new SCCIJ President introduced himself like this: A Swiss national from Winterthur, born in September 1953, with two brothers, two sisters and one wife. Then, he revealed the lines of an eventful and diverse private and professional life.

His education covers a wide range: From three years vocational training each in men’s fashion and textiles right after high school and as a car mechanic after a seven-year-long world tour with his brother to two years in business school in Zurich and two years of studies at St. John University in York (England) for a Master of Business Administration. 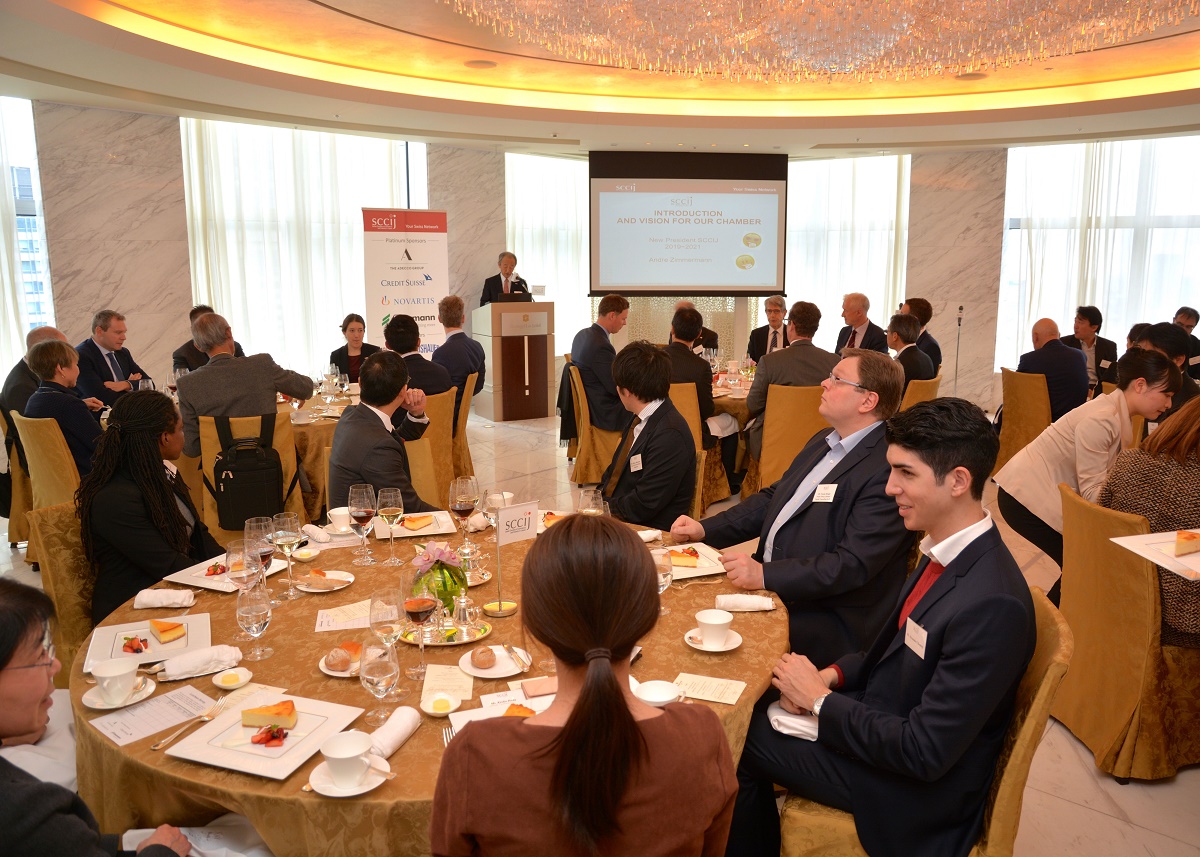 His connection to Japan stems from his stop-over in Osaka for a three-year training run in Japanese martial arts. After looking into karate and judo, Mr. Zimmermann decided to delve into Shorinji Kempo, a combination of several martial art traditions including the use of weapons. “This was the perfect choice for a skinny guy like me who used to run away in order to avoid being beaten up,” he said smilingly.

The Japanese language abilities he picked up in and around the dojo later helped him to land a job at the Swiss office of Yamaichi Shoken in Zurich. From there, he started into three decades of business life – ranging from the financial market to investment promotion, then railway business, coffee machines and eventually chocolates (see biography of the speaker below).

A Thank You for the team

After introducing himself with such openness, Mr. Zimmermann thanked his predecessor Mr. Michael Mroczek and also the office team for their service to the SCCIJ. “The chamber has grown into something impressive and the Swiss chamber has now set a high standard for other chambers in Japan,” the new President said. This would be a challenge for him, but he definitely would try to fulfill the high expectations.

He reminded his audience of the origins of the chamber founded in 1981. “The aims were to swap business experience and best practices, share grievances about local conditions crippling business in Japan, find business friends and relate to one’s origins in Switzerland,” Mr. Zimmermann explained. In the early years of the chamber, there was also a consensus about a mutual need of the Swiss community for a consolidated approach towards Japanese authorities and regulators, he said. 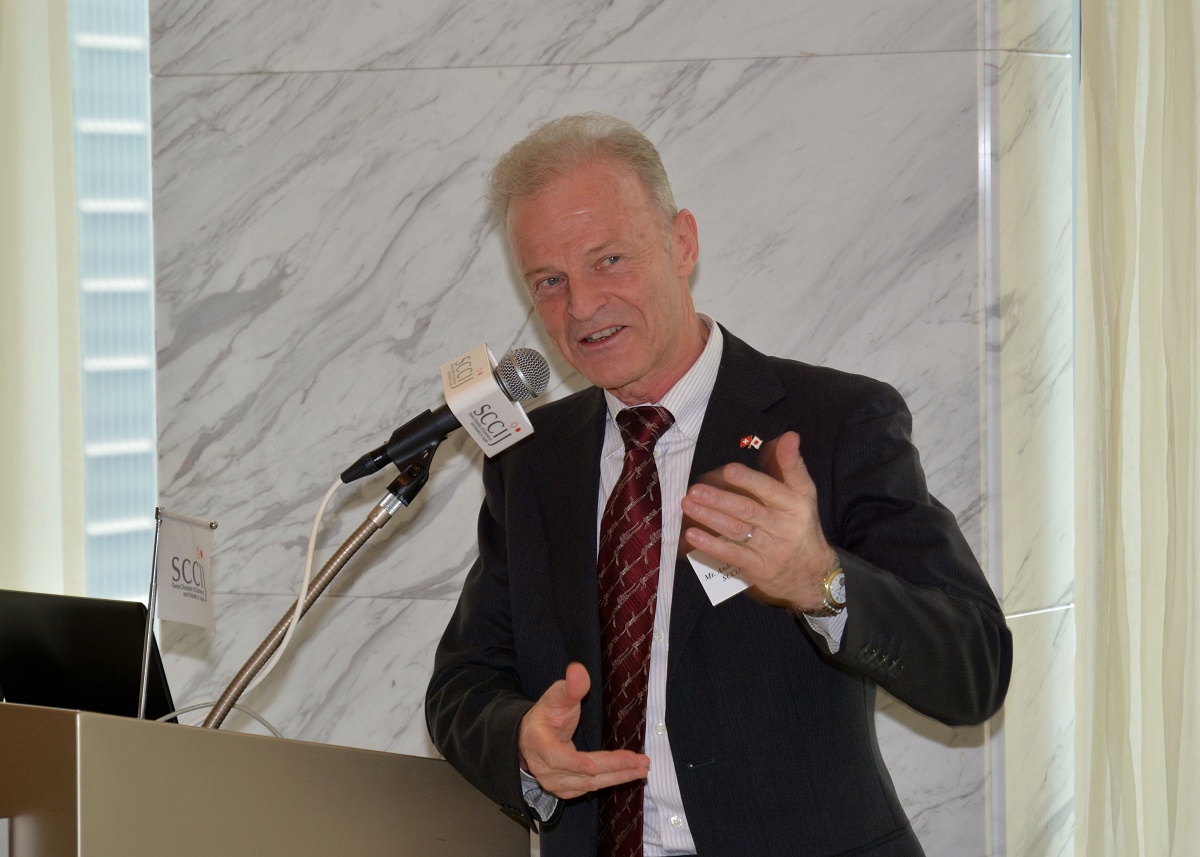 Relevance of the EBC

From the start, the main challenge was to maintain European competitiveness in Japan against American business interests. The answer of enterprises and chambers of the European Community was to found the European Business Chamber in Japan in 1972. Since then, the Europeans are speaking with one voice. In 1999, the Swiss chamber realized that instead of being play ball for the Japanese bureaucrats, one better joins the EBC. Thus, Switzerland became the first EBC member not being an EU nation.

Having joined first the SCCIJ and then its board after his arrival in Japan in 1989, Mr. Zimmermann was the first representative of the SCCIJ on the EBC board. “We tackled all the restrictions for doing business in Japan,” he remembered. “This is still going on today, only the issues have changed.”

The real work of the EBC is done by its 24 committees ranging from aeronautics to telecommunication. “Join one or more of these committees to share information and work on deregulating the respective industry in order to overcome artificial trade barriers,” he recommended. Joining would be on a voluntary basis but in the common interest of everybody in the European Union and Switzerland.

Finally, Mr. Zimmermann laid out a vision of his own SCCIJ presidency: “Here in the chamber, we need to discuss what is your most urgent need to address and then we will check these needs with the EBC”, Mr. Zimmermann explained. “This is the most important formal part of the SCCIJ existence in Japan.”

In addition, he promised to keep track of issues that are of interest to all relevant stakeholders, provide attractive platforms to meet and exchange opinions, know-how and concerns and to inform the members on upcoming regulatory changes. “Share the fun of being part of a dynamic and smart business community in Japan”, he appealed at the end of his speech which earned him a big applause. 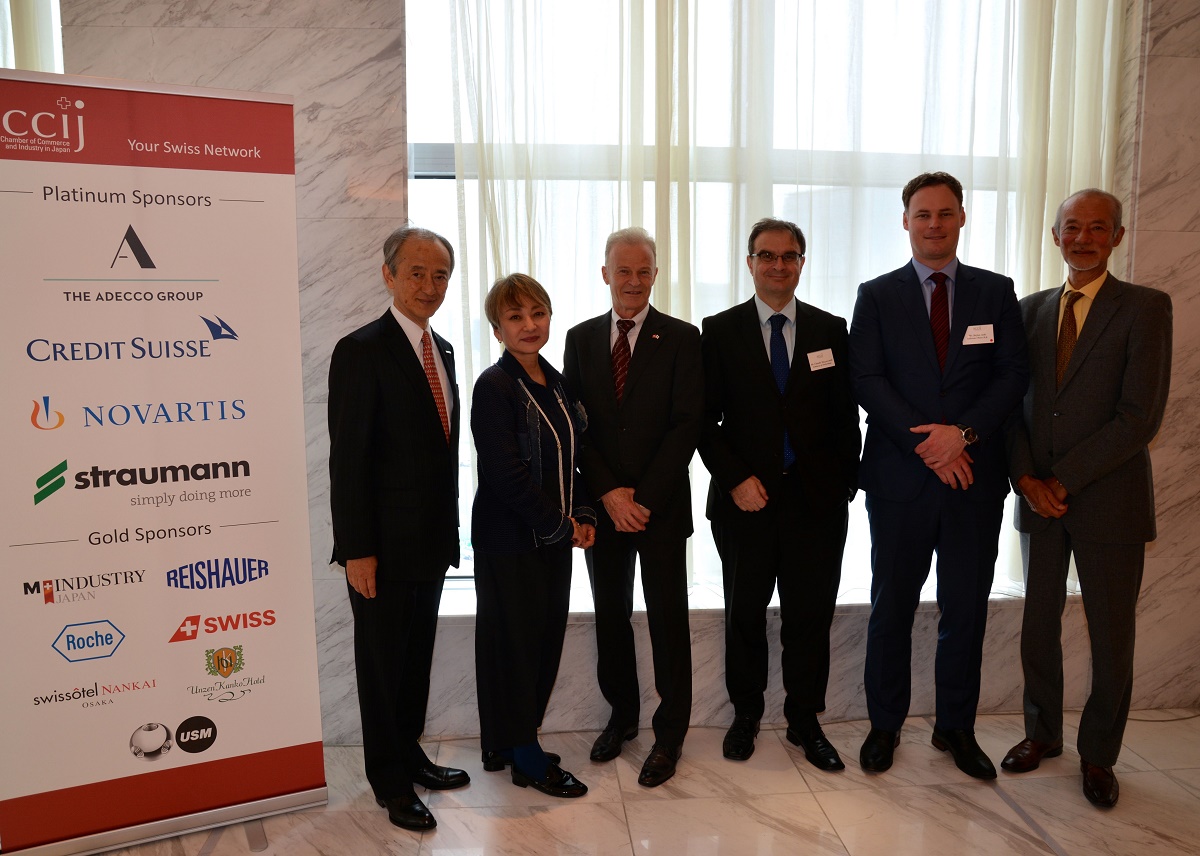 A Swiss national, Mr. Andre Zimmermann has spent most of his career in Japan starting in 1989 as Managing Director for Telekurs Financial. First serving as Senior Representative for LocationSwitzerland SECO 2005-2007 and as Managing Director for MATISA Japan from 2007, he took up his current position at Representative Director, Lindt & Sprüngli Japan Co., Ltd. in 2010. Mr. Zimmermann has also served on the Executive Committee of SCCIJ and Executive Operating Board of the European Business Council (EBC).