In the context of the informal dialogue on cybersecurity between Switzerland and Japan, Japanese authorities invited the Federal Cyber Security Delegate of Switzerland to speak about “The National Strategy for the Protection of Switzerland against cyber risks and its importance for the Economy.” Mr. Florian Schütz held his speech during the opening of the 2020 Symposium of the Cross-ministerial Strategic Innovation Promotion Program (SIP). He emphasized the strategic objectives of Switzerland in the framework of the national strategy for the protection against cyber risks (NCS) 2018-2022. Mr. Schütz also presented the organization of the Confederation in the area of cyber threats and introduced the main actors involved in the protection of critical infrastructure. Then he visited an exhibition about the results of the Swiss program in the field of “Cybersecurity for Critical Infrastructure.” 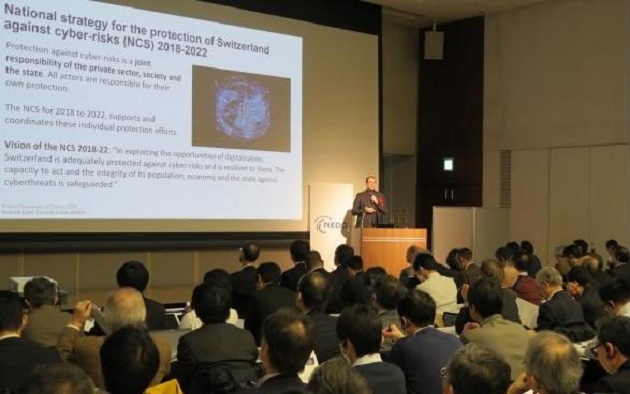 Keynote speech of Mr. Florian Schütz at the SIP-Symposium (©Secretariat of the SIP Symposium)

Prior to his participation in the symposium, the Swiss delegate also met with various Japanese organizations involved in cybersecurity. His trip to Japan followed last year’s visit to Switzerland of Prof. Atsuhiro Goto, President of the Institute of Information Security (IISEC) and Program Director for SIP “Cybersecurity for Critical Infrastructures” at the Cabinet Office.

The Informal Cybersecurity Dialogue between Switzerland and Japan started in June 2019, when the President of the Swiss Confederation, Ueli Maurer, met with the Prime Minister of Japan, Shinzo Abe, in Tokyo. Both Switzerland and Japan face similar challenges in addressing the risks associated with cyber-attacks. The two countries also value an enhanced international collaboration in this field.

Collaboration in IT research

Earlier, the University of Zurich (UZH) in Switzerland and Japan’s National Institute of Informatics (NII) established a new framework for cooperation in the area of information technology. The signing ceremony of a Memorandum of Understanding concluded a workshop resulting in concrete proposals for collaborative research.

According to a report by the Science & Technology Office at the Embassy of Switzerland, Swiss Ambassador Jean-François Paroz opened the event. Prof. Masaru Kitsuregawa, Director General of NII, called the workshop fruitful and promising. Prof. Christian Schwarzenegger, Vice President for Faculty Affairs and Scientific Information at UZH, pointed to the structural similarities and mutual technological aspirations of both countries. These common features would support the success of their strategic endeavor, he said.

This latest university collaboration resulted from a meeting between President Hengartner, Vice President Schwarzenegger, and Director Kitsuregawa in October 2018 in the “Science and Technology in Society Forum” (STS-Forum). The Memorandum of Understanding opens new possibilities for joint research projects, researcher and student exchange, seminars, conferences, and student internships.

Text: SCCIJ based on material of EDA and STOT