Tokyo (SCCIJ) – More than 40 members and guests of the SCCIJ enjoyed the presentation of Mr. Setsu Mori, a Japanese expert on Corporate Social Responsibility (CSR), at the July luncheon. The central argument of the founder and editor of the only CSR magazine in Japan was that this concept has now entered its second generation. “CSR has been reinforced and strengthened by the concepts of Creating Shared Value (CSV) and the ‘Outside-In Business Approach’ of Sustainable Development Goals (SDGs)”, Mori explained. His presentation investigated Japanese trends in this management area and clarified differences in the understanding of CSR between Japan, Europe and the United States.

At the outset of his lecture, Mr. Mori emphasized that the concept of CSR had evolved and would now be put together with sustainability. These concepts would be needed to strengthen the structure and organization of a company, especially because Japan is facing depopulation as the only country in the world. There would exist many old and small family businesses in Japan, but old would not mean sustainable, Mori said.

The facts about the current state of CSR in Japan show a mixed picture: According to a survey by the business lobby Keizai Doyukai, 71 percent of its manager members recognize that CSR should be at the core of their business, but only 31 percent actually integrate it into management. Mori referred to the Japanese way of social responsibility (sampo yoshi) which aims to satisfy in three ways: satisfaction for the sellers, buyers and the society.

“But I do not agree with this saying because very few business people use the phrase when they need to make a business decision but they only use it when they are asked about CSR in Japan,” Mori stated. “Thus, we have a gap between phrase and reality”, he added. Therefore, the most important thing would be to integrate CSR into the core of management. 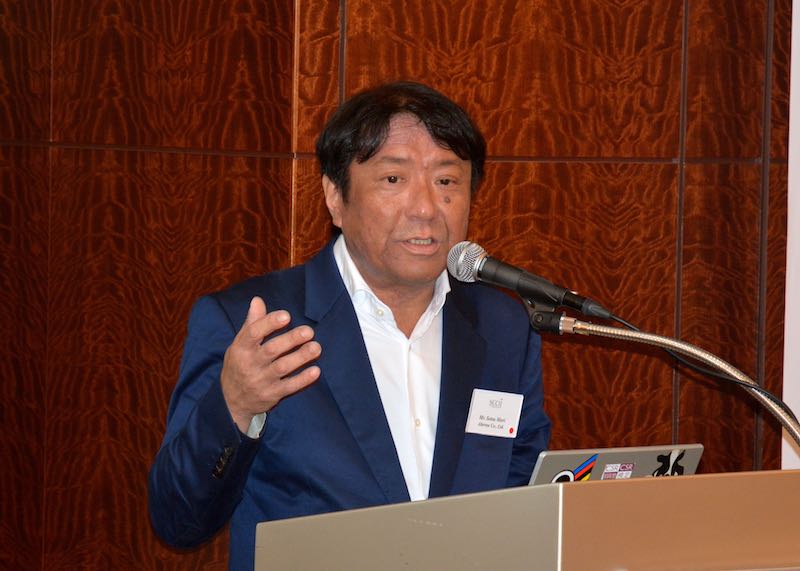 Different attitudes in West and Japan

The speaker also compared different attitudes of economists and managers in the West and in the East with regard to corporate philosophies. One extreme would be the U.S. economist Milton Friedman, Mori said. Friedman argues that charity would be a breach of fiduciary duties of an executive and should be done only with his own money during his free time. “Quite a few Japanese business people believed in this phrase 15 years ago, but now only very few,” Mori claimed.

Rather, they would follow Peter Drucker who argued that leaders are responsible for the performance of their institution but also for the community as a whole. “This is a very good phrase,” Mori said. Konosuke Matsushita, the founder of Panasonic, also described companies as public institutions which should flourish always together with society. Even if a company could prosper alone and stand apart from the social interest, its business would not necessarily be sustainable.

Mori supported the concept of Peter Brabeck-Letmathe, the former CEO of Nestlé, and the economist Michael E. Porter of Harvard Business School who developed the Creating Shared Value model (CSV). Its central premise is that the competitiveness of a company and the health of the communities around it are mutually dependent. “Many Japanese companies are influenced by this concept,” Mori stated. 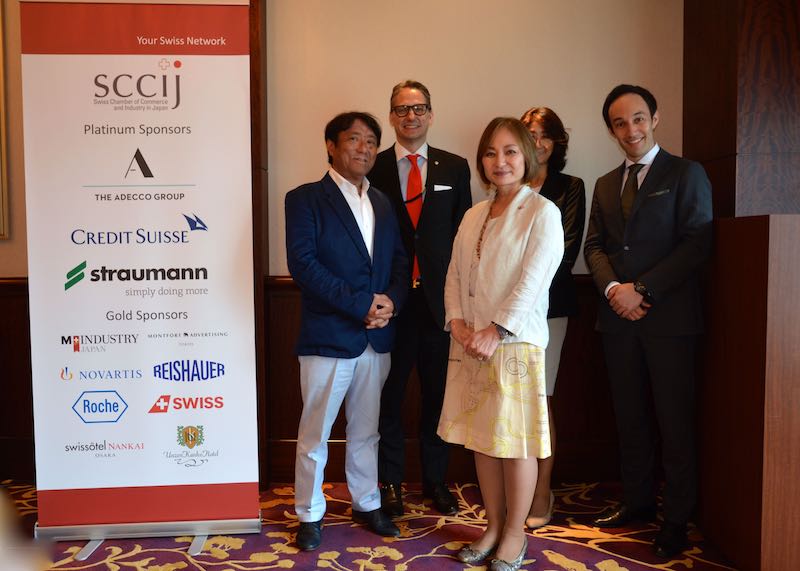 The speaker introduced his own model of the “sustainability management”. Its structure features four quadrants differentiating different levels and approaches to CSR and CSV. The quadrant in the lower left shows compliance in the narrow sense covering legal compliance, responsibility to profit, dividend and tax payments and responsibilities for human resources.

The quadrant above it features compliance in the broad sense covering “response-ability” of a company to society, its correspondence to soft laws such as ISO 26000 and SDGs (sustainable development goals). The step upwards from narrow to broad compliance would lead to value creation, the speaker said.

Similarly, the lower right quadrant contains philanthropy in its original meaning ranging from donations, assistance to NGOs and NPOs, volunteer activities and environmental education. The step to the upper right-hand quadrant would be lead to value creating CSR and CSV. Mori mentioned the outside-in business approach, open innovation, societal marketing and societal products.

Mori elaborated further on the outside-in business approach. “The company on the inside wants to reach customers in the market with its products and services”, he explained. “To find new business, you have to go fishing in the green ocean of social problems”, he said. There, companies would be able to find new products and services for its customers of the future. “This approach is currently getting popular in Japan,” the speaker added.

Finally, the CSR expert gave his outlook. Besides their traditional goals of profitability (financial goal) and prosperity (social goal), companies would strive for sustainability (societal goal). “I am quite confident that this vision will become the general way of thinking,” the speaker said. Companies would aim for sustainable development goals and use CSR and CSV as means for this mission. Thus, CSR and sustainability would be rapidly aligning.

Mr. Setsu Mori is the founder of the Japanese business magazine Alterna, the only business magazine in Japan focusing on environmental, social and corporate governance issues. He is the incumbent CEO and the editor-in-chief of the magazine, after working twenty years for “Nihon Keizai Shimbun” (Nikkei Newspapers) including serving four years as the bureau chief of Los Angeles, USA.

He has authored several books such as “Companies chosen by the future”, “DNA of Brands”, and translated the book “Let My People Go Surfing” written by Yvon Chouiard, the founder of Patagonia. The company Alterna is expanding its business as media, running not only the magazine but also websites such as Alterna S (S means student and social), and CSR Today which provides CSR business people with abundant information regarding CSR and social branding.