Tokyo (SCCIJ) – The two speakers of the February Luncheon shed from their different perspectives some light on the challenge to reduce plastic waste. Ms. Alana Bonzi shared her experience with the Fujisawa Beach Cleaning Project/Clean S.E.A. with the more than 60 members and guests of the SCCIJ. In the second part, Ms. Miki Kanoh explained the Nestlé commitment to make all their packaging recyclable or reusable by 2025. 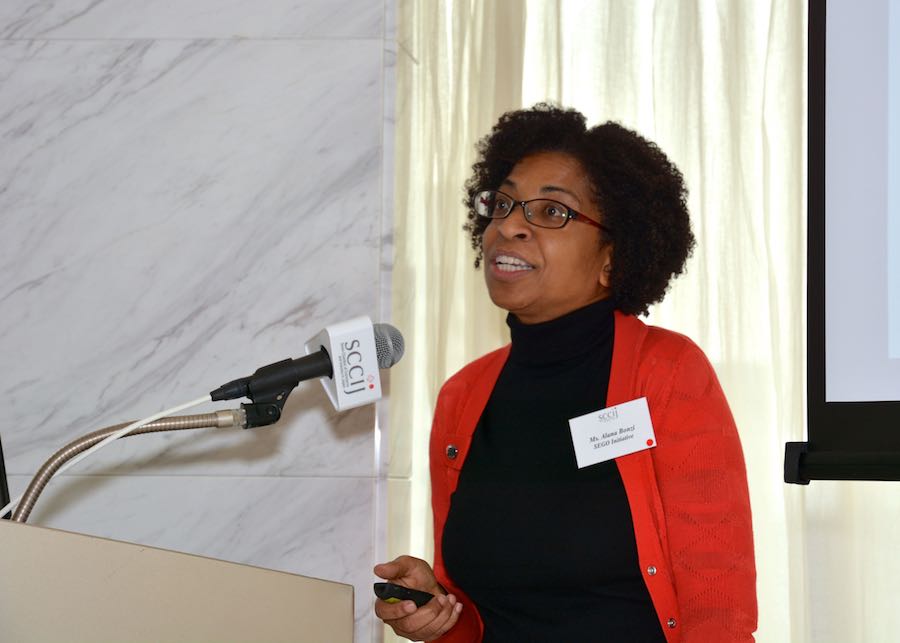 Ms. Alana Bonzi started her luncheon presentation with enlightening facts about plastic in the ocean and the omnipresence of microplastics. 93% of all bottled water is now contaminated. “In one week, we can ingest up to 5 grams of microplastic, that’s the plastic amount of a credit card,” the speaker explained. Numbers show enormous challenges: Humanity produces 275 million metric tons of plastic. Eight million tons go into the ocean every year, and the plastic often stays there longer than we live. A cigarette butt needs ten years to biodegrade in the ocean, a plastic grocery bag 20 years, a disposable diaper and a plastic bottle 450 years. At the same time, humans underestimate the relevance of the world’s oceans. They produce half the world’s oxygen, regulate our climate, transport our goods, and provides food and even medicine.

Plastic waste in the ocean burdens the island nation Japan more than land-locked countries like Switzerland. “In the water around Japan, there are 27 more times microplastic than the average,” Ms. Bonzi explained. “According to a recent study, there are 3 million plastic bags in Osaka Bay alone.” Japan disposes of its discarded plastic mainly by incineration (58%), known as thermal recycling, and by export for recycling (14%). Japan recycles only 13% of the waste, burns 8% without energy recovery, and dumps 6% in landfills.

Each year, Japan collects 100,000 metric tons of trash from its coasts. “There are 2,600 tons removed annually in our Sagami Bay area. And during our beach cleanups, we remove mainly cigarette butts, plastic bottles, and single-use plastic polystyrene.” Ms. Bonzi said. 70% of the beach and ocean-bound debris originates from land-based sources. These facts led her to start a beach cleaning project in Fujisawa, where she resides.

Its achievements impress: 5,632 volunteers in 10 years collected 10,640 kilograms of marine debris in 11,280 hours. The hands-on, family-friendly project consists of three pillars: volunteering, public education, and reconnection with the marine environment. Twice a year, in Spring and Fall, corporate volunteers and their families join with local students in their Fujisawa Beach Cleaning Project.

The Spring cleanup is a way to remember Earth Day and the Fall cleanup is part of a global citizen science program called the International Coastal Cleanup. Led by an international NGO called Ocean Conservancy, this public education cleanup campaign is held in over 100 countries and ties the local grassroots cleanups to a global movement.

The project also uses art as a way to spark creativity and emotion about the issue of ocean plastics. The public education pillar includes art exhibitions or sustainable art walks. The displays take place on the beach during the cleanups as well as in Fujisawa and other parts of Japan. There are also opportunities for artists-in-residence who co-create with the local community to produce work with collected plastic debris.

Finally, using sailing as a vector, volunteers have a chance to get much closer to the marine environment that they are trying to protect. This component is the Clean S.E.A. (Sailing Experience Activity) of the project. “Fujisawa Beach Cleaning Project/Clean S.E.A. reinforces the land to sea trash connection by intercepting floating offshore and onshore debris,” Ms. Bonzi said. This task is an ongoing year-long program.

With Fujisawa hosting the Olympic sailing competitions, municipalities, schools, and associations will be using the sailboats before, during, and after Tokyo 2020. And there are specially customized sails with these boats for corporate sponsors. Ms. Bonzi invited all those interested in supporting the Project this year to contact her at SEGO Initiative. 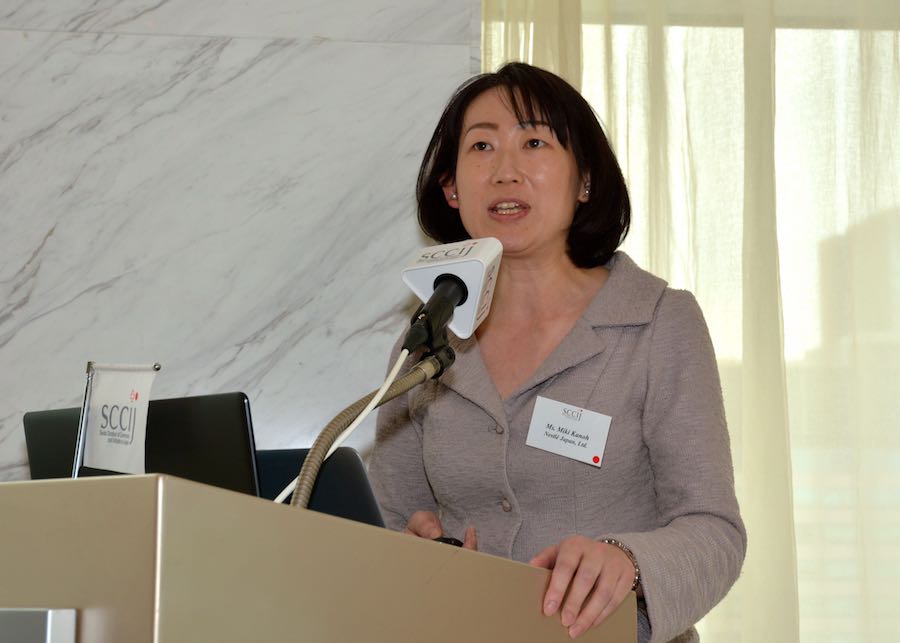 In the second luncheon part, Ms. Miki Kanoh talked about Nestlé’s initiatives to make 100% of their packaging recyclable or reusable by 2025. “Our purpose is to enhance the quality of life and contribute to a healthier future,” she told the attentive audience. The vision of Nestlé: “None of our packaging, including plastics, end up in landfill or as litter.” The company also wants to reduce the use of virgin plastics by one-third by 2025. In January, it announced to invest CHF 2 billion for this purpose.

One approach of the company would be the pioneering of alternative materials, Ms. Kanoh said. Nestlé opened the Nestlé Institute for Packaging Sciences to explore the full range of options, like refillable, reusable, simplified, or recycled materials. The challenge lies in the fact that high performance is often required because the material comes into touch with food or beverages. For example, the bag for the cocoa powder Nesquik and straws consists now of paper, and the amount of recycled material for beverage pet bottles will be increased.

The second pillar of the initiatives aims at shaping a waste-free future by partnerships with public and private sectors to work on waste collection and recycling. “This is especially necessary for newly industrialized countries,” the speaker explained. Nestlé wants to advise and help with the sorting and recycling of plastics materials and develop the necessary infrastructure together. “For this, we are collaborating with governments and NGOs to come up with business models.” 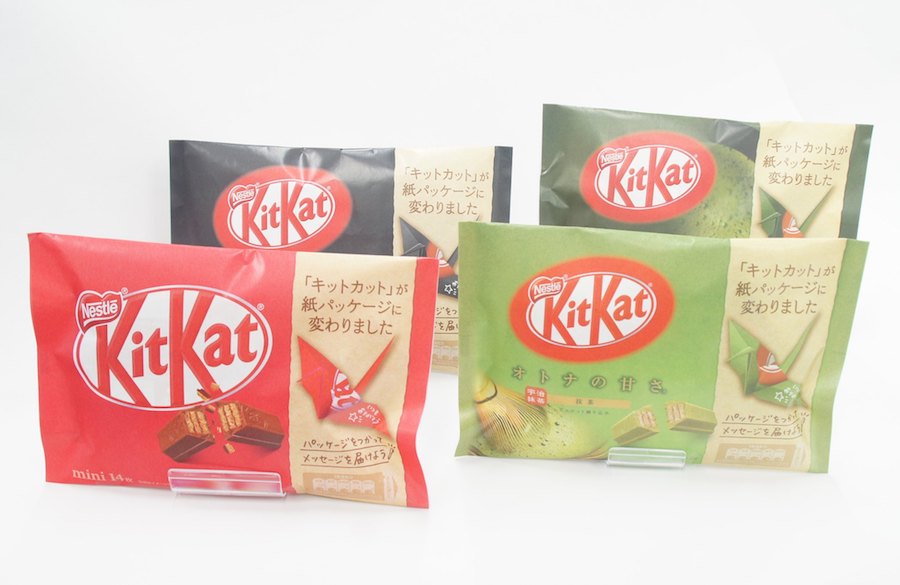 No plastic at Nestlé Japan

As a third approach, the company is driving new behavior. “For example, we banned single-use plastics at our facilities in Japan since the beginning of January,” Ms. Kanoh said. Another point is the cleanup activities of employees, such as the SEGO initiative. “It was the first time for me, and I have to say that it was fun,” she recounted her own experience.

Since the end of September, the primary KitKat outer packaging in Japan consists of paper instead of plastic. Until 2022, all KitKat products packaging in Japan should be recyclable. “Kitkat is our bestselling product and bought by many foreign tourists in Japan, which puts a big responsibility on us,” she explained. To increase customer awareness for the change, Nestlé proposes using the paper packaging to create an origami crane.

“The crane means praying for peace and praying for people and is a strong symbol for Japanese.” Therefore, Nestlé makes the emotional message to use the paper of the bag to fold a crane or a heart. This way, customers will comprehend that Nestlé changed the packaging material. “The key challenge is to involve people in social, serious issues,” she emphasized the company idea for the origami crane. Advertisements and events at opportunities like Valentine’s day or the entrance test season will continue to spread this message. 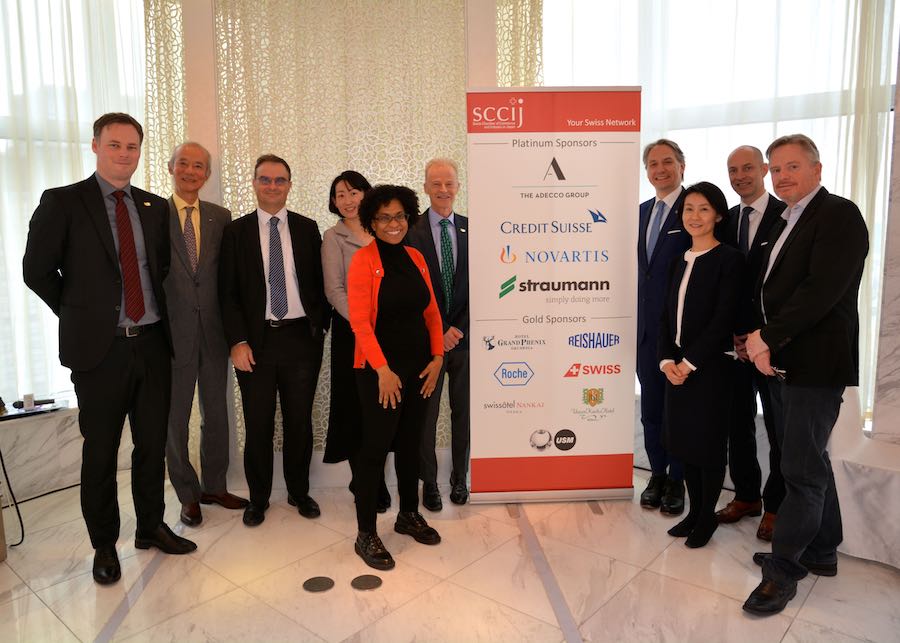 Members and advisors of the SCCIJ Executive Committee with the February Luncheon speakers Ms. Alana Bonzi and Ms. Miki Kanoh

Biographies of the speakers

Trini-Canadian Ms. Alana Bonzi has lived in Japan for several years, first in Kagoshima and now Kanagawa. When she and her husband Michel bought their house in Fujisawa City, they decided to look for concrete ways to give back to the local community and launched the Fujisawa Beach Cleaning Project in 2009. A lecturer on Corporate Social Responsibility / Sustainability at Keio University, Ms. Bonzi has written articles for business magazines, including the American Chamber of Commerce Journal and Eurobiz Journal.

Ms. Miki Kanoh joined Nestlé Japan in 2001. She served as the manager of Consumer Services, Media Relations, and External Relations. Assuming her current roles as Executive Officer and Group Head of Corporate Affairs Group since August 2017, she is responsible for Corporate Communication, working on building relationships with stakeholders internally and externally, including employees, media, government, experts, NPOs, local communities.