Luncheon: Design process of The Circle in Zurich

Tokyo (SCCIJ) – The Circle at Zurich Airport, one of the largest buildings in Switzerland and designed by the Japanese architect Riken Yamamoto, was inaugurated in November 2020. At the April SCCIJ luncheon, Yamamoto detailed to an audience of 50 attendants the design process of this new landmark for the largest Swiss city. 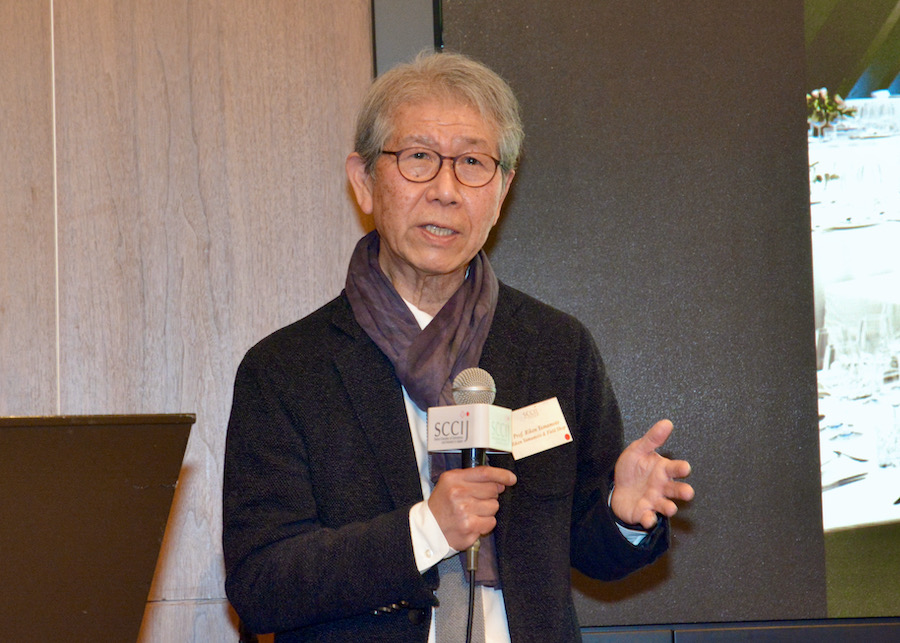 At the beginning of his talk, Professor Yamamoto highlighted the huge size of the building and the more than eleven years from the start of the competition in April 2009 until opening in November 2020. Just the initial competition phase lasted ten months. Construction of The Circle started in April 2015. “But due to the very bad Corona situation, there may be another opening ceremony this year,” the speaker said.

The Circle is located between Zurich airport and the local town of Kloten. “There are big airport buildings on one side and small houses on the other,” Yamamoto described the architectural challenge. His answer: Viewed from the airport terminal, The Circle has the image of one enormous building with a dynamically curved façade. However, seen from the green hill of Butzenbüel, it appears to be a small city.

He described the three main specifications of the design competition. First, Swissness – The Circle is to express in its compact spaces not only the high standard of living in Switzerland but the beauty of contemporary Switzerland. Second, surprise – The Circle is to be full of surprises and to inspire visitors and users. Third, comfort – it has to be as comfortable as a home for cosmopolitan international travels as well as local people.

Professor Yamamoto explained his solutions to these challenges. “Swissness is precision, that is our belief – from small objects such as watches to large objects such as buildings,” he said. Hence, The Circle’s buildings consist of extremely slender, 200 millimeter thick columns to create an architecture of unprecedented delicacy.

Also, the design distributes space into seven functions, ranging from shops, hotels, offices, education, art, conferences to parking. Symbolically, the façade to the airport side is slanted and hanging over a two-lane road. “This is amazing because this would not be allowed in Japan,” the architect smiled. At the same time, his design puts small building volumes along the hillside. The buildings have a lower height and terraces facing the hill. 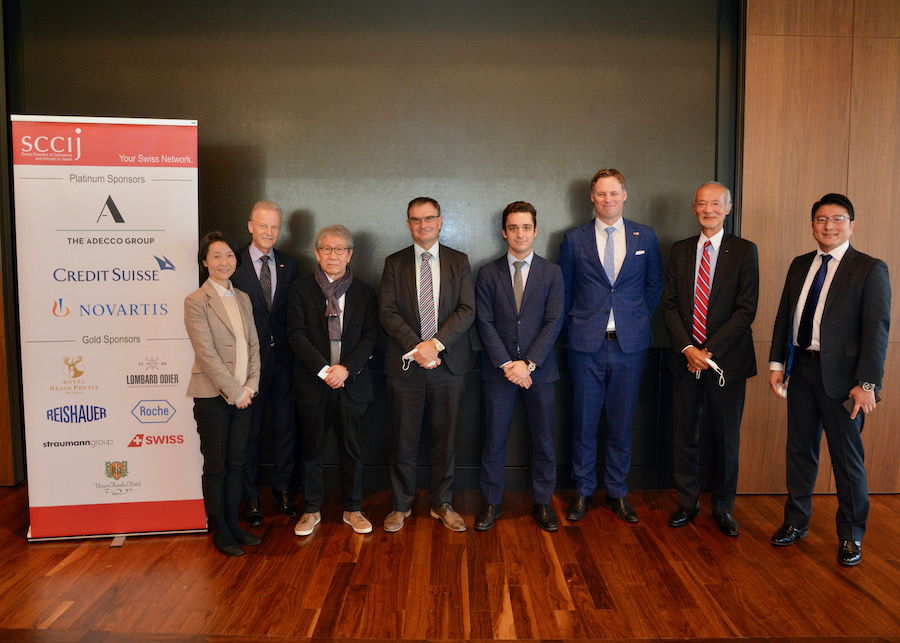 Members and advisors of the SCCIJ board with luncheon speaker Professor Riken Yamamoto.

In between, open areas called “Gasse” and “Platz” create walkways. Each “Gasse”, which is the German word for a small lane in a traditional city, has a minimum width of eight meters and is formally marked by the same cobblestones as in old city centers in Switzerland. The “Platz” as a public space is supposed to be a meeting and encountering place.

A glass roof covers this “almost natural city” but due to fire regulations, it is not completely closed. The tenants of the retail stores can individualize their facades to their liking. But above the glass roof, identical facades create a sense of unity, only differentiated by the density of columns. “Most people do not believe that you can walk through the Circle from one side to the other,” Yamamoto explained his design. 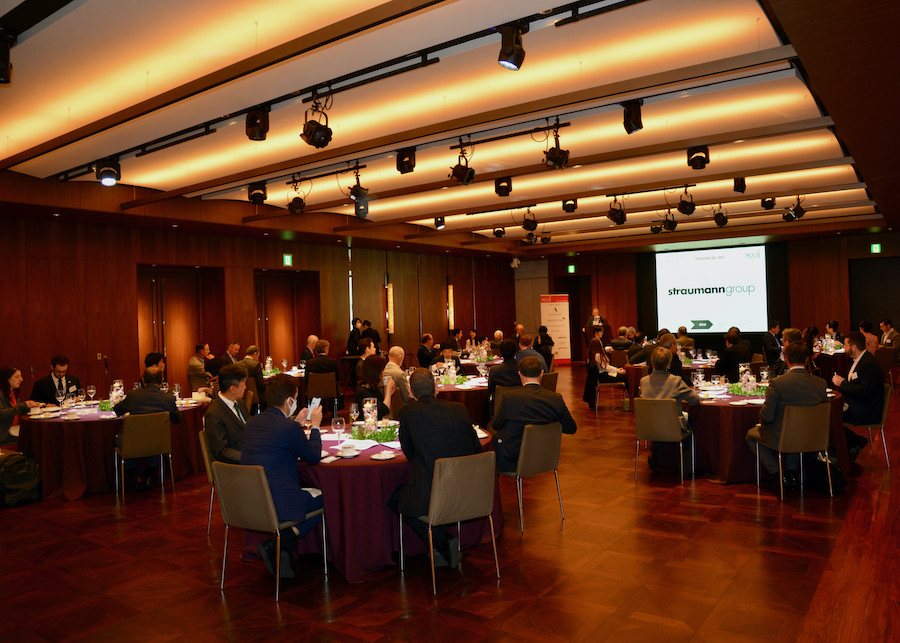 The April Luncheon was the second physical SCCIJ member event since the lifting of the state of emergency in Tokyo.

Following a Masters of Arts from the Faculty of Architecture of the Tokyo University of the Arts, Riken Yamamoto founded his office, Riken Yamamoto & Field Shop, in 1973. He taught architecture at Kogakuin University and the Yokohama Graduate School of Architecture (Y-GSA). In 2018, he was appointed President of the Nagoya Zokei University of Art and Design. He has received numerous awards, including the Japan Arts Academy Award, the Mainichi Art Awards, the Prize of Architecture Institute of Japan for Design, the Public Buildings Award, the Good Design Gold Award, and the Building Contractors Society Award.