Tokyo (SCCIJ) – Almost 50 members and guests of the SCCIJ followed May luncheon speaker Hans Jakob Roth on his journey of “bridging cultures in order to turn cross-cultural complexity into high performance vitality”. This was also the title of his talk. At the luncheon, Roth introduced the theoretical model used by the Swiss consulting company “EurAsia Competence” in its assessments, mainly in the Asian and Western European environment. The model is based on the concepts of “proximity” and “distance” where Western and Eastern thinking differ considerably. This would cause challenges to leadership and management in a rapidly changing global environment, Roth said at the luncheon. Solid decisions needed to be based on both concepts, so short and long term horizons could be incorporated at the same time, Roth explained.

“Not better or worse, but different”

The luncheon speaker started his talk with a paradox statement. Roth quoted the Chinese philosopher Laozi: “The one who knows, does not speak; the one who speaks does not know”. Speaking, Roth implied with a smile, meant he, too, was still looking for the truth. So he spoke about how Western and Eastern thinking differ from each other. “Eastern behavior pattern is not better or worse, but different from our own pattern”, Roth emphasized.

One example would be the term “human resources”. “I always talk about human beings and not human resources because this changes the value you put on an employee”, Roth said. Similarly, the concept of human rights promoted by the United Nations would only represent the Western view. “In an Asian society, your rights are defined by fulfilling your obligations towards the group. It then decides what kind of rights you have,” the speaker said.

He started the introduction of his proprietary theory of culture with the thesis that culture “is the way a human being perceives his or her environment”. Thus, culture would be more like a process and constantly changing instead of representing a static result. Also, the environment would shape the culture. As an example, he named different population densities due to the different availability of space which would shape human relations. “It will be impossible in Japan to be as free as in the U.S., because space is not available to the same extent in Japan,” Roth said. 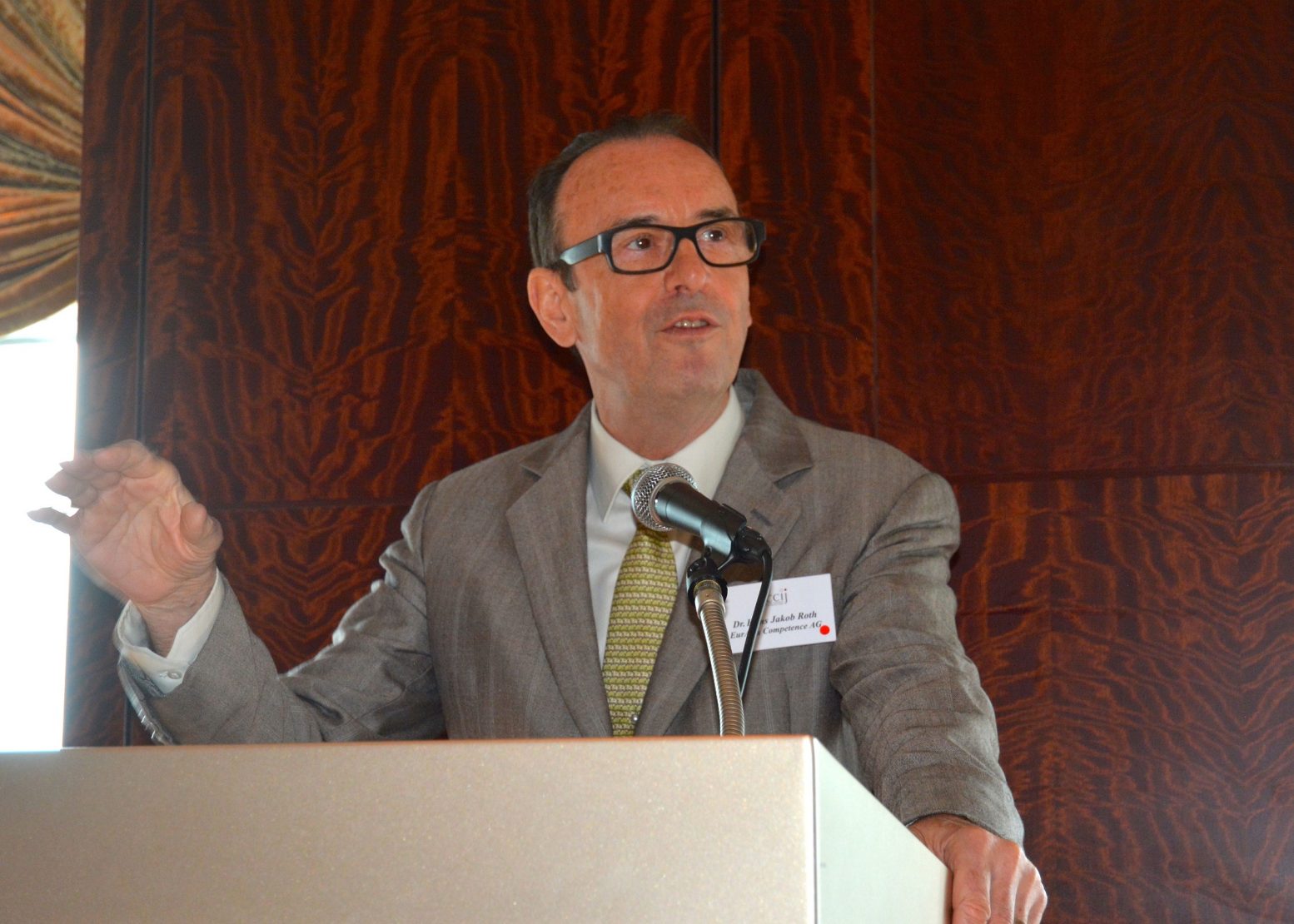 Concepts of proximity and distance

Next, the speaker explained the different philosophies of distance and proximity prevailing in the West and other countries. Detachment as the Western approach would be a precondition for analysis and abstraction. “This enables planning and risk reduction but it leads to a strong reduction of empathy and an exclusion of emotions”, Roth analyzed. The West would follow the Hegelian dialectic thinking of thesis, anti-thesis and synthesis. But by analyzing a situation, a lot of information would be lost.

In contrast, Asian and many other non-Western societies would follow the approach of proximity. The difference would be the same as between a photo and a film. “Reality is felt holistically with all senses and not rationally, so contradictions are united,” Roth explained.

One example would be the different reactions to a development which can be seen rationally and emotionally. “If my daughter is awarded a scholarship for a college education in the U.S., I will be happy for her, but at the same time, I suffer as a father because she is going away from me”, Roth said. This union of opposites would not be allowed in Western binary thinking. 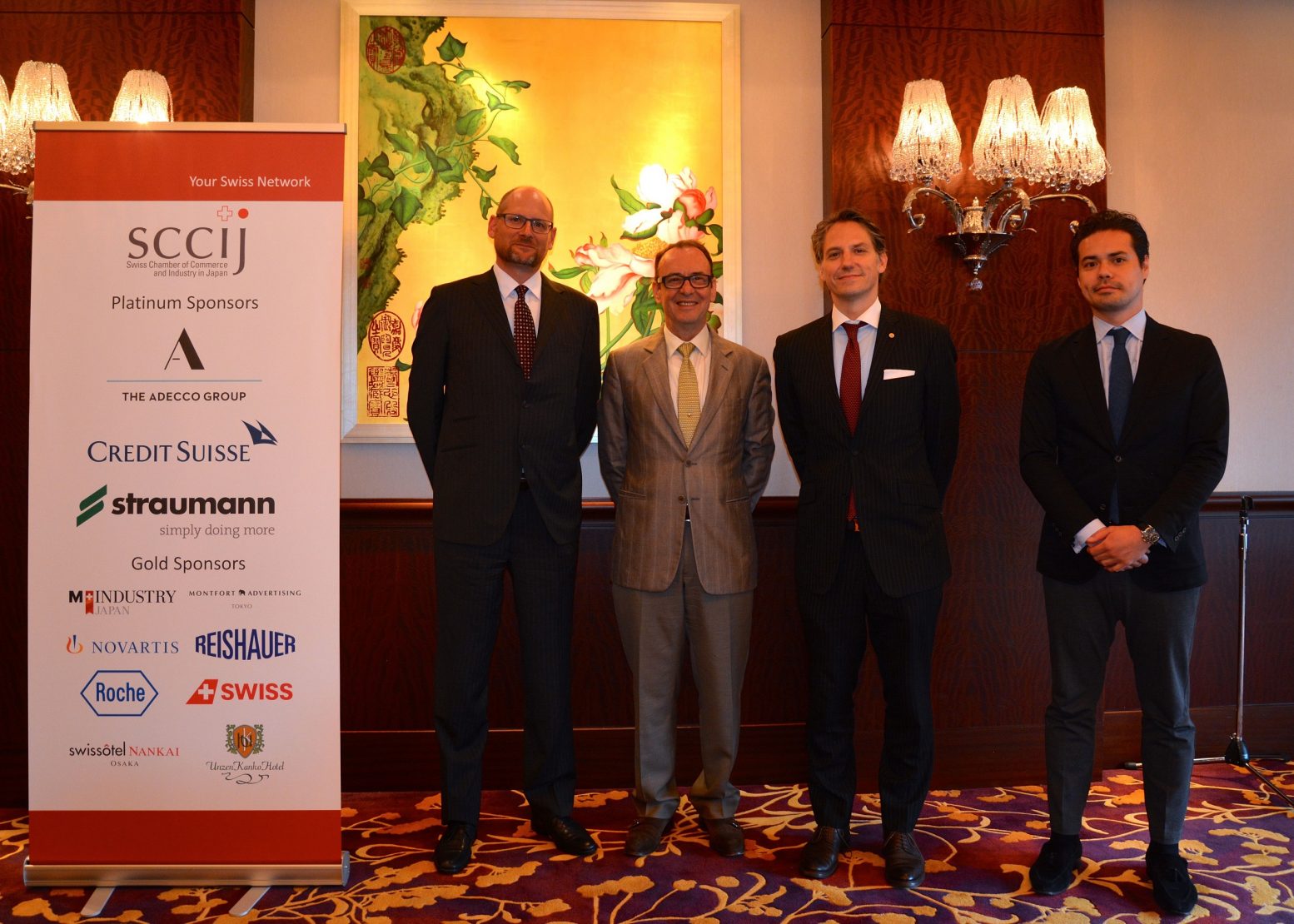 Management style has to adapt to culture

The second big difference between East and West lies in the thinking pattern, the speaker continued. When federal officials in the Swiss government together with outside experts attempted to define the possible challenges for Switzerland in the year 2025, Roth participated in the meetings. After listening for some time, he remarked heretically that Switzerland should better define its vision for 2025. This viewpoint would stem from his experience of 25 years in Asia, he said. “Because this kind of visionary thinking is not Western but Asian”, he claimed. “Asia is strong in pragmatism and operations but weak on strategy and planning. But Asia is compensating this with a vision where you want to be”, he summarized his experiences. “The vision exists, although nobody knows how to get there.”

The Western planning method helps to avoid risks whereas the Asian thinking in here and now terms exposes the people to the full risk due to the short perception horizon. Thus, if everything is regarded as being in movement, the only security and stability you have are personal relations. That would be the reason why Asian counterparts of Western companies want to know everything about the individuals they are dealing with. “So if you have a good network it will show the dangers early enough”, he said. Also, if you have this very short horizon, a risk is not only a danger, but also a chance. This potential could be used more easily, he explained.

On the behavior side, Asian societies would put more attention on friends and the working environment and less attention on the outer world. Harmony only exists in the in-group. Out-groups are confronted with a strong Darwinian survival spirit. This would lead to challenges for the leadership because the company targets would clash with employees’ targets unless the General Manager succeeds in creating a new family spirit on the company level, the speaker said.

Cooperative leadership would not be possible in Eastern societies so Western managers need to work against their value patterns, Roth demanded. “The leader is the one to decide and he is expected to make the decision. No decision from him automatically implies weakness”, he stated. This may be difficult for Western managers because they have to act against their original value patterns.

EurAsia Competence is a leading management services boutique dedicated to creating high-performance organizations. It focuses on private enterprises and governmental as well as non-governmental institutions in the European and Asia-Pacific regions. It helps European and Asian client organizations turn complexity and volatility in culturally different working environments into high-performance vitality.

EurAsia Competence applies a proprietary theory of culture to transferring knowledge for a client-specific practice oriented organizational purpose. The approach takes the basics of human behavior and social organization into account. EurAsia tackles superficial understanding of culture by putting the individual and community at the center, using anthropological, sociological, and psychological insights to develop a coherent picture.

Its services are: strategy and organizational development; leadership and change; cultural due diligence; issues and reputation management; coaching for boards, executive teams and project teams; assessment, education and training of individuals and teams.