Luncheon: An economic outlook on 2020

Tokyo (SCCIJ) – At the January luncheon, Mr. Daiju Aoki, regional Chief Investment Officer and Chief Economist for Japan at UBS Wealth Management, entertained the more than 50 members and guests of the SCCIJ with a firework of arguments and predictions about the world economy and Japan’s particular circumstances. The SCCIJ January Luncheon traditionally presents an annual economic outlook of a Swiss bank in Japan. 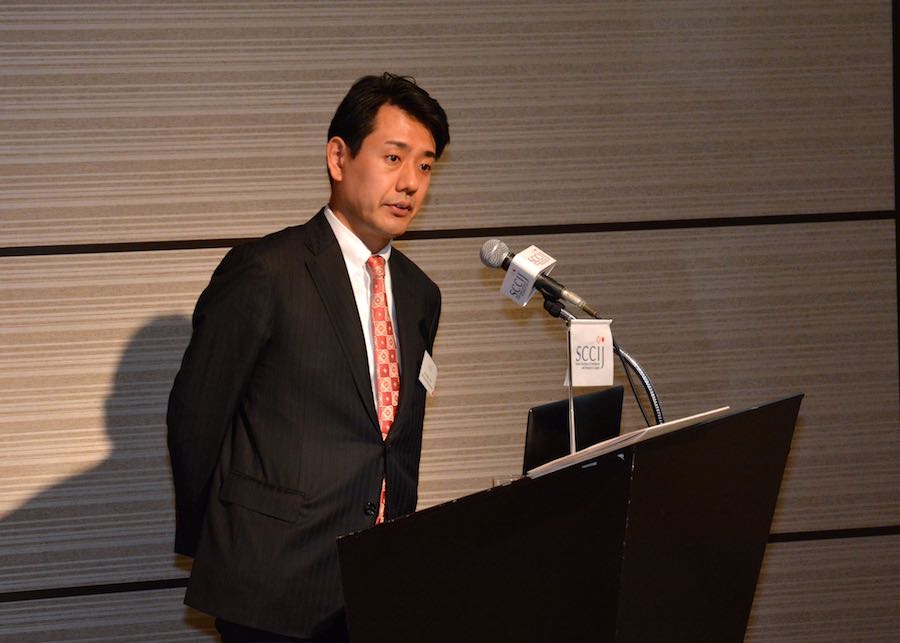 The luncheon speaker Aoki started his talk with some bold predictions. One of them was that Prime Minister Shinzo Abe would introduce a supplementary budget in autumn to avoid an economic post-Olympics blues. Another one: Abe may call a snap election in July 2021. “Senior members of his party do not support an extension of his rule, but it is important for Abe to hint at this possibility to keep potential successors in check,” the speaker said.

Mr. Aoki also talked about the possible effects of the new coronavirus outbreak in China. One-third of all foreign tourists in Japan originate from China. Thus, the ban on group tours in China would have some impact on consumption in Japan. Also, some companies have production bases in China. “There could be some economic damage,” Aoki warned. Judging from the lessons of the SARS crisis in 2003, the equity market could go down, and the Japanese yen could appreciate. “But for the long-term investors, we recommend that they stay in the market,” he argued.

According to the UBS investor watch, they are uncertain for now, but optimistic for the future. They see reasons to be cautious this year. “Almost 8 in 10 investors feel that markets are moving toward a period of higher volatility. However, seven in 10 investors feel optimistic about their portfolio returns over the next decade,” the speaker said. The first focal point of 2020 is political uncertainties mainly caused by the U.S. presidential election.

Up to 65% of Japanese companies think that Donald Trump will stay in power, Aoki reported. But the global growth rate estimated by UBS at 3.0% will be the same as last year, driven by higher global semiconductor shipments in chips and smartphones due to the introduction of the 5G technology. If the equity market is developing well during the first half of 2020, this would be supportive of Trump. “But in our opinion, upside room is limited,” he warned.

Another important focal point of the UBS analysis is the soft-landing of the Chinese economy. “We are not so pessimistic, but also not so optimistic,” the speaker said. Halfway to the next communist party congress in 2022, there will not be much stimulus from the stateside while consumption and fixed investment have been shrinking. Also, the current account may turn negative because manufacturers are leaving China due to the risen labor costs. Thus, it would be necessary for China to attract money from outside,” Mr. Aoki said.

Finally, how should investors position themselves in this year of choices? The recommendations of UBS are quite explicit. “In equities, go consumer over business, go domestic over global, go for quality and yield,” is the simple advice. In fixed income, drive in the middle of the road and choose sustainable over traditional, in currencies, turn away from the U.S. dollar, and in commodities, go precious over cyclical. 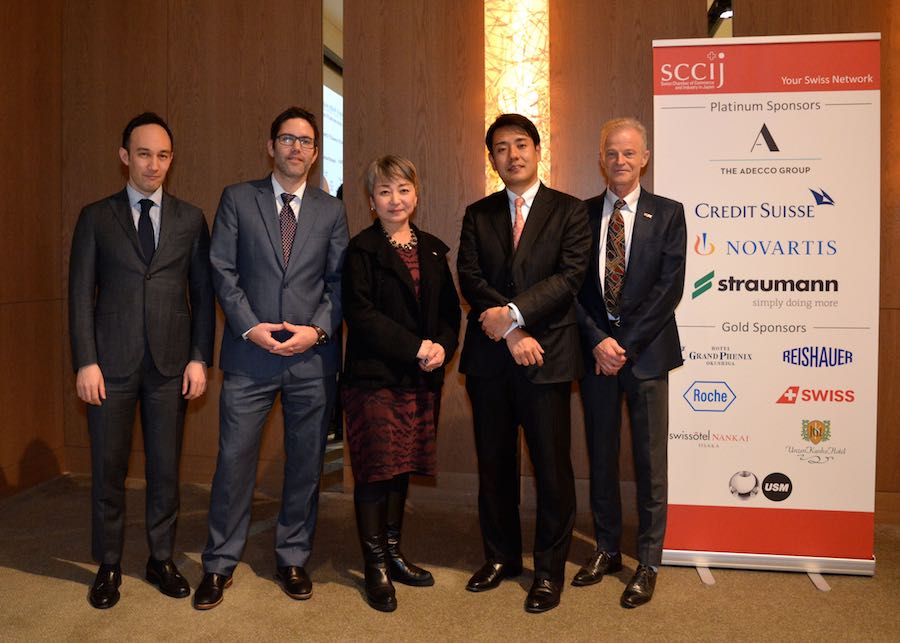 From here, Mr. Aoki turned his attention to Japan. “The risk-on mode in the equity market has been causing a deviation from the theoretical value,” the speaker said. Hence, UBS expects the USD/JPY exchange rate in the range between 106 and 112. The current expansion of the Japanese economy would continue through 2021. But due to the effects of the consumption tax hike in October, a significant contraction in the fourth quarter of 2019 looks inevitable. In the medium perspective, the growth rate of Japan’s gross domestic product would stay around 1%, he said.

In the long term, Mr. Aoki called Japan’s current account balance a “risk case.” The reason: During the 2020s, the trade balance would turn negative, and the foreign income balance would decrease because Japanese companies are losing their competitiveness in the global market. As a result, the current account would turn negative. “This development undermines the ability of Japan to finance the issuance of government bonds internally,” he argued.

Too many unproductive companies

His second Japan area of interest was whether the country could overcome deflation. The problem started already in 1992 when the working-age population peaked. “Since then, Japan faces an aging population,” he stated. One key in the deflation process would be the corporate savings rate, which inversely correlates with core price inflation for the past decades. Household savings rate declined because of the increasing number of older people spending their savings. Also, the savings rate of the government is negative. “Thus, if Prime Minister Abe wants to achieve 2% inflation, he needs a negative corporate savings rate of 5%, which is very difficult to achieve,” the speaker said.

One exciting development of the next years will be an increased spin-off of unprofitable segments of Japanese groups. 91% of such companies in Japan have an operating margin to sales of less than 10%. This figure is only 28% in the U.S., 66% in Europe and 59% in Asia. But even worse for Japan, more than 60% of group companies feature an operating margin of less than 5%. “The groups may spin off many of these unproductive companies,” he stated. This trend will be accelerated when in April, the government introduces a tax exemption. At the same time, there would be a lot of room in non-manufacturing to improve labor and capital efficiency through I.T., cloud technology, remote steering and artificial intelligence. 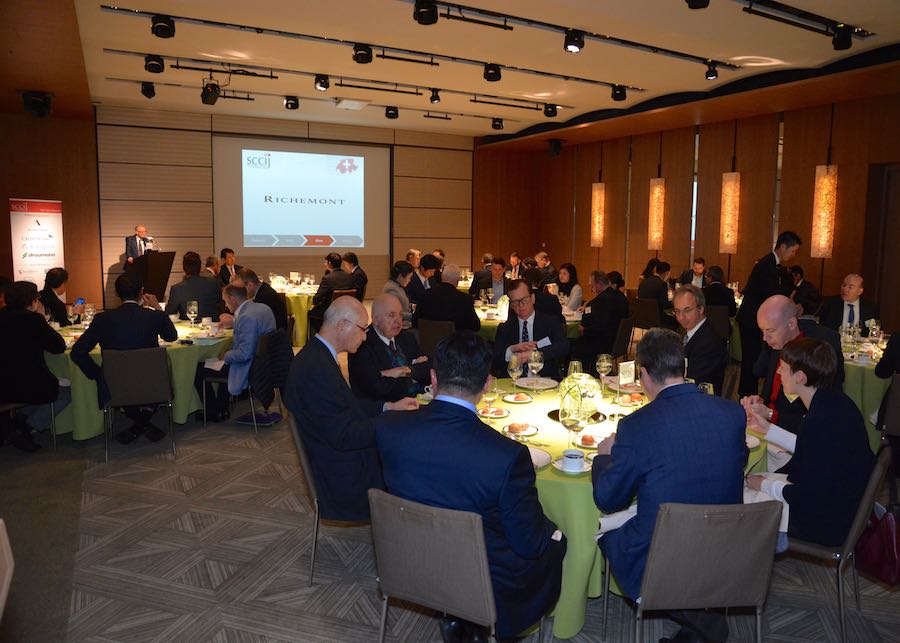 Mr. Daiju Aoki is the Regional CIO and Chief Economist for Japan at UBS’s Wealth Management. Prior, he served as Economist for UBS Investment Bank’s Equity Research franchise in Japan. In 2015 and 2016, he ranked top economist among global firms (5th overall) in the Institutional Investor “All-Japan Research Team” rankings. Mr. Aoki joined UBS Securities in 2010 after serving nine years as an economist in Japan’s Cabinet Office under the Koizumi, Abe and Fukuda Cabinets. Mr. Aoki holds a Master’s degree in Economics (ABD) from Brown University.