“Japan was where Siber Hegner made its money”

Tokyo (SCCIJ) – Mr. Kurt Sieber is not only known as a regular participant in many events of the Swiss Chamber of Commerce and Industry in Japan, but also as its eldest individual member. During the more than 50 years of his business career in Japan, he was President of Nihon Siber Hegner K.K., the predecessor of the Swiss trading company DKSH Japan. After his first retirement, he became President of the DKSH affiliate, Nihon Fisba K.K. SCCIJ asked Mr. Sieber in an extended interview why he came to Japan and stayed for so long and what young Swiss people could learn from his biography. 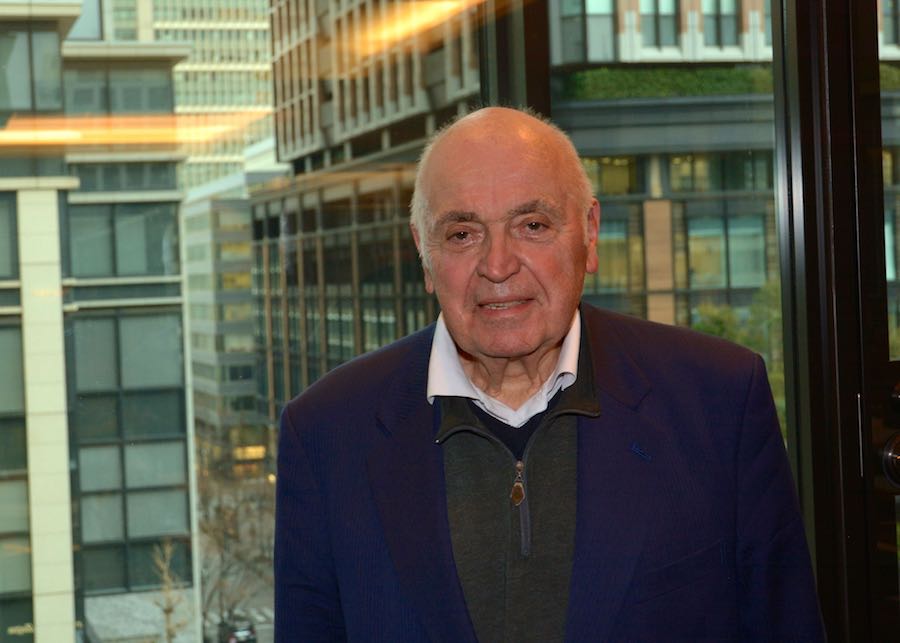 You left Switzerland for Japan in 1960. Why did you go to Japan?

Kurt Sieber: When I was 19 years old and graduated with a baccalaureate from commercial college (Handelsschule) in Zurich, the Swiss trading company Siber Hegner now known as DKSH scouted me. My feeling at that time was that Switzerland alone was a little bit small for what I wanted to achieve. They offered me training in Switzerland and a subsequent posting in a subsidiary overseas. That was quite attractive and more interesting than the initial salary which they paid, but they offered half of it during my Swiss military service, and I also saw this as my chance to go abroad.

How was your experience at Siber Hegner?

Kurt Sieber: I entered the company in 1957 and worked for three years in Zurich starting for one year in the accounting department. This start was very valuable because I understood how the company was working financially as I had to sort out the files of the overseas subsidiaries. After one year, I was offered a posting to New York and after the second year a posting to Hong Kong. However, because I knew the financial situation of these outposts, I declined. Only when I received the offer to go to Japan, I agreed because this was the country where Siber Hegner made its money.

Please tell us about your first years in Japan.

Kurt Sieber: From September 1960, I worked in Tokyo and was to help to build up the new industrial materials business. At that time, this activity was minimal because the company mostly relied on watches and machinery imports. In our team, we imported special materials such as essential oils for perfumes and cosmetics like soap and natural flavors for the food industry.

My first three years in Tokyo were challenging. In the morning, I went to a Japanese language school, and in the afternoon, we started to develop the import of pharmaceutical and chemical raw materials with some initial success. Hence, after three years, I was asked for a three-year extension of my expatriate contract which I accepted to take advantage of my Japanese language skills and to build further up my initial experience, knowledge, and connections in the industries which we served.

That must have been the time when the Japanese economy developed quickly.

Kurt Sieber: Indeed, Japan suddenly became an attractive market with Prime Minister Ikeda’s double income policy. By 1970, ten years later, we were really in business. Our team grew from 5 to 20 people. Import rules were relaxed, and Japanese companies started to use good quality imported products. By 1978, my new division for the first time achieved a turnover of 10 billion yen with staff close to 100. I was elected as Managing Director and later became Executive Vice-President of the Industrial Materials Division. There was no stopping.

Which area of the Industrial Materials Division was the best?

Kurt Sieber: Well, this was the pharmaceutical area because that was also where I met the woman who in 1977 became my wife. As a pharmacist in this department, she was one of my subordinates, and we fell in love and married at the Zenkoji Temple in Nagano City. Hence, I also became more and more privately involved with Japan and the Japanese people.

What happened after the “bubble economy” of the 1980s deflated?

Kurt Sieber: At the height of the bubble, our Division’s sales peaked at 48 billion yen. On the other hand, the consumer goods including watches and the machinery division were facing great difficulties. By 1993, I was asked by Zurich Headquarters to reorganize and restructure the whole company, which I did with a social plan for the employees who were affected. I brought down the operational costs in Japan from 8.4 billion to 5.4 billion yen. For example, the move from Marunouchi to Tamachi saved us about 1 billion yen in annual rent. We were again at break-even in 1995, and by 1998, the year of my first retirement from NSH, we registered a profit of two billion yen again.

After your early retirement, why did you continue to stay in Japan?

Kurt Sieber: All our children were born here in Japan, my wife is Japanese, we enjoyed Switzerland on holidays, but after three weeks, we were longing to go back to Tokyo. At the same time, on the occasion of my first retirement, I was asked to look full-time after Nihon Fisba K.K., an affiliate of NSH which dealt with home textiles and was in financial distress. We restructured and then saved the company. By 2005, the company was standing on strong feet again, and I passed on the presidency to the son of the principal shareholder in Switzerland. I stayed on to serve three more years as an Auditor and Advisor to the President and also up-started the subsidiary of an Austrian company.

After so many years in Japan, what is your advice for young Swiss people – should they come to Japan and work here?

Kurt Sieber: For multiple reasons, young people should come to Japan for up to five years and work for the Japanese subsidiary of a foreign, preferably Swiss company. This experience can become a strong stepping stone in their future careers. After that, you have to come to your conclusions.