Tokyo (SCCIJ) – The Swiss start-up Yasai, the Japanese word for vegetables, should soon be harvesting 20 tons of herbs a year from an indoor facility. Their “vertical farming” method offers ecological benefits in particular. More can be produced with fewer resources. Yasai is a spin-off from the Swiss Federal Institute of Technology Zurich. 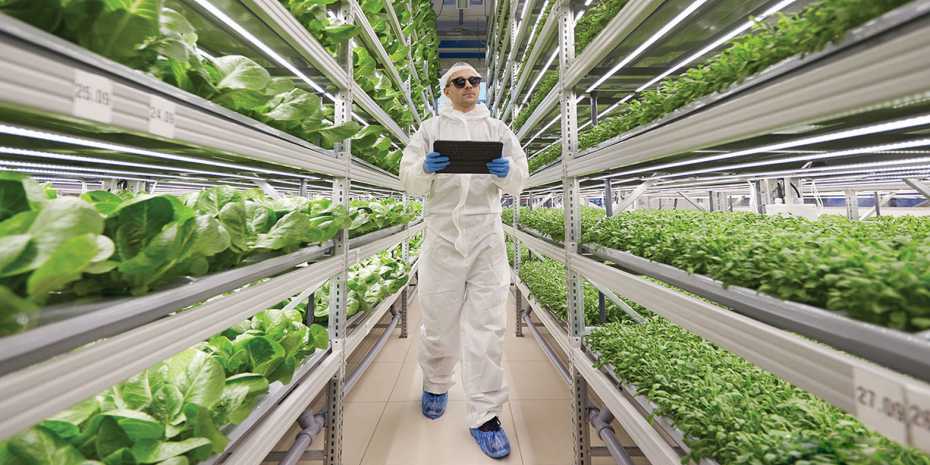 How the founders of the Swiss start-up Yasai envision the future of agriculture. (© Yasai).

In the future, more crops will be grown indoors in high-rise buildings or high-ceilinged halls: vegetables, lettuces, and herbs will grow stacked on top of each other on multiple rows of shelves. The plants thrive not in soil but nutrient-rich water. The room’s climate – light, temperature, irrigation – is regulated automatically, with artificial intelligence helping to maintain the ideal conditions.

Such production is much more resource efficient than farming in the field. “Over the same area, our yield is 15 times greater while using 95 percent less water,” Yasai co-founder Mark Zahran explains. In addition, no pesticides are needed, and because cultivation takes place in populated areas, there are no costs for transport that damages the environment. “Hence, our products are even better than organic because we produce more sustainably”, he adds.

This fall, Yasai will be growing basil, peppermint, coriander, and the like in a factory hall in Niederhasli that covers more than 1,000 square meters. The company also aims to cultivate unusual herbs such as mizuna or shiso green. If everything goes according to plan, the first harvest will take place six weeks later. From that point, Yasai wants to sell around 20 tons of herbs each year. The pilot project is made possible by a partnership with the agricultural cooperative Fenaco, a Yasai investor.

“We opted for products that are mostly flown into Switzerland and are profitable, too,” Zahran says. After all, sustainable cultivation is all very well and good, but the start-up also has to be able to survive on the market. In principle, vertical farming is possible for any type of vegetable or fruit, “but we can’t compete with cheap hot peppers from Spain yet,” Zahran says. At least, Switzerland has plenty of unused factory halls with high ceilings and bunkers as possible locations for more artificial production.

The biggest problem with vertical farming is the energy needed to heat the halls to 25 degrees and to power the lamps used in place of sunlight. However, more than other vertical farming start-ups, Yasai is committed to the circular economy. “That’s why we use waste heat for heating and energy-saving LED lamps for lighting,” Zahran says. In addition, Yasai recycles organic waste for cultivation and derives fertilizer from wastewater.

But for the time being, one thing will not change: harvesting is done by hand. The pickers of the future will be wearing full-body suits, goggles, and gloves, though, as this is the only way to prevent pests from entering the hall.