Basel and Toyama to cooperate also on biotech

Tokyo (SCCIJ) – The Cantons of Basel-Stadt and Basel-Landschaft and the Japanese prefecture of Toyama want to enter into a new cooperation in the field of biotech while strengthening their existing cooperation in the pharmaceutical area. A memorandum of understanding has been signed to this effect. This Swiss-Japanese network began already in 2006 based on both regions’ strong tradition of pharmaceutical knowledge and research. One feature of this Swiss-Japanese cooperation is a joint Basel-Toyama symposium which was held at the end of last month for the fifth time.

The Canton of Basel-Stadt and the Toyama Prefecture have been exchanging ideas and information regularly at the political level since 2006. This relationship was formalized in 2009 when the two signed a declaration. The Canton of Basel-Landschaft participates in this cooperation. Now, Basel-Stadt councillor Conradin Cramer and Toyama Prefecture governor Takakazu Ishii renewed and extended the agreement.

Under the terms of the agreement, the two locations have agreed to a regular exchange in the pharmaceutical field as well as new exchanges in biotechnology. Joint activities between universities in these areas will also be promoted, as well as cooperation in the fields of academia, arts and culture. 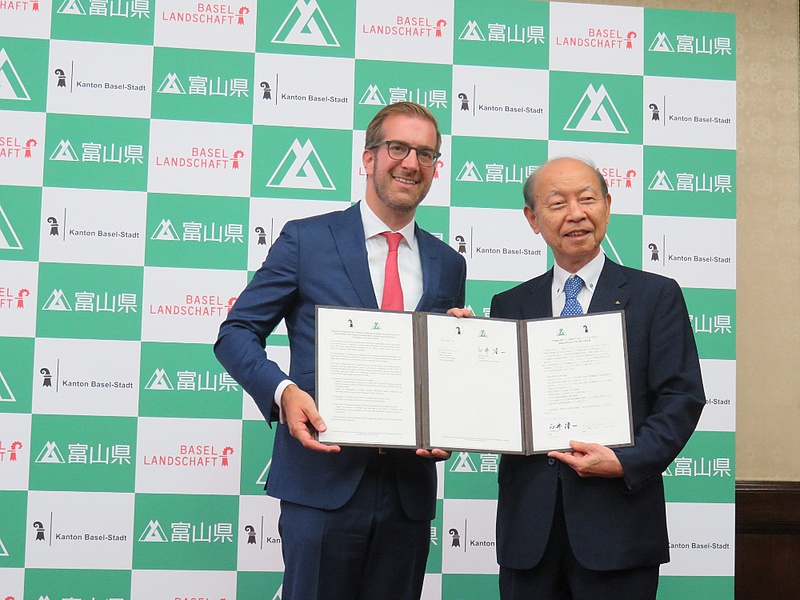 Basel and Toyama are both considered important locations for the pharmaceutical industry, and the universities in Basel and Toyama have long been working together in the life sciences. An example of this is the Toyama-Basel Joint Symposium on Pharmaceutical Research and Drug Development, which takes place every two years. The fifth symposium was held in Toyama on 23 and 24 August 2018.

The cooperation between Basel and Toyama reaches back into the previous decade. In October 2010, for the first time, two clusters for biotechnology and life sciences in Switzerland and Japan held a common scientific conference. The first “Toyama-Basel joint symposium on pharmaceutical research and drug development” brought the cooperation in bio and life sciences between the Basel area and Toyoma prefecture to a new level.

Their partnership started in the summer of 2006 with the visit of a Toyama delegation to Basel. In October 2007, a high-level delegation from Toyama prefecture made a cooperation agreement with Basel to deepen their mutual relationship in the field of life sciences. The agreement, signed by the Governor of Toyama prefecture, Takakazu Ishii, and Basel’s Governor, Urs Wüthrich, was intended to provide mutual assistance for high-tech exhibitions and matchmaking, and to encourage exchange between the regions’ academic institutions and companies.