Tokyo (SCCIJ) – At the first physical luncheon since February, Mr. Jean-François Paroz, Ambassador of Switzerland to Japan and Honorary President of the SCCIJ, gave an overview of the development of Swiss-Japanese relations during his term in Japan. About 50 members and guests of the SCCIJ used the opportunity to bid him farewell since he finishes his assignment in August. 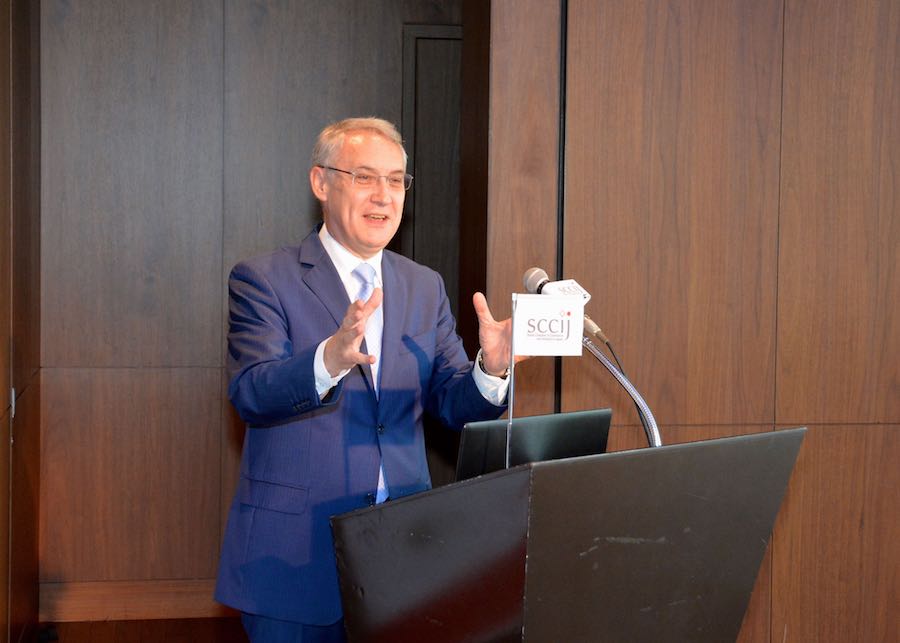 Mr. Jean-François Paroz, Ambassador of Switzerland to Japan and Honorary President of the SCCIJ, gives his luncheon speech (© SCCIJ)

Under the leitmotif “Switzerland and Japan 2020” and with a light hand, the ambassador presented an overview of his work during the last four years. First, he regretted missing the postponed Tokyo Olympic Games and the “House of Switzerland” where Swiss athletes, the press, and Japanese and Swiss citizens will meet. “Like Moses, I was only looking at the Promised Land, but I am not frustrated that I will not see the House of Switzerland, because I had four extraordinary years in Japan,” Mr. Paroz said half-jokingly. The “Grand Tour of Switzerland in Japan”, an interactive map of Japanese locations with a special relation to Switzerland, and the public diplomacy campaign Doors to Switzerland, will continue until the postponed games.

Second, he referred to the pandemic which kept his staff busy. It is a priority of the Embassy to be in contact with the Swiss community in case of disasters or emergencies and it is the case also since last February with the pandemic. Swiss tourists present in Japan have been able to return to Switzerland and it was not necessary to organize repatriation flights. “Now, the Swiss authorities draw the attention of the Japanese authorities to the fact that Swiss citizens cannot enter Japan but Japanese citizens are allowed into Switzerland,” he announced. This “discriminatory treatment” would not change soon because Japanese authorities had extended the regulation until the end of August, but an official dialogue has started, also about a special entry channel for businessmen. 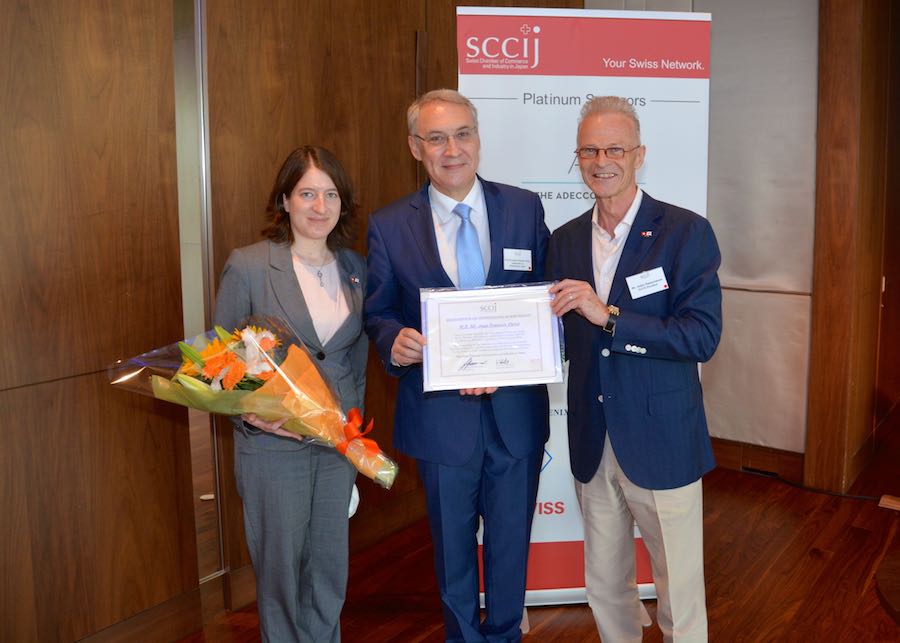 Third, the ambassador asked: “What is the true character of the Swiss presence in Japan?” He answered his question with the statement that economic exchange and trade have been the main pillars of relations from the very beginnings in the 1860s. The economic benefits were increased by the Free Trade Agreement which came into force in 2009 as the fourth agreement in the history of the bilateral relations and which has to be modernized as a matter of priority.

“Many Japanese novels set in the middle of the 20th century mention Swiss products such as watches, and after I arrived in Japan, we could celebrate 50 years of UBS presence in Japan,” he reminded his audience. Besides, Switzerland and Japan would have strong relations through tourists, scientists, city partnerships, and even an alumni network of more than 2,000 Japanese who studied in Switzerland. The cooperation between universities has intensified over the past decade. “Japan is a ‘global priority country’ for the Federal Department of Foreign Affairs,” the ambassador emphasized. “We consider Japan as a pole of stability in a highly unstable region and aim to strengthen the high-level political dialogue.” 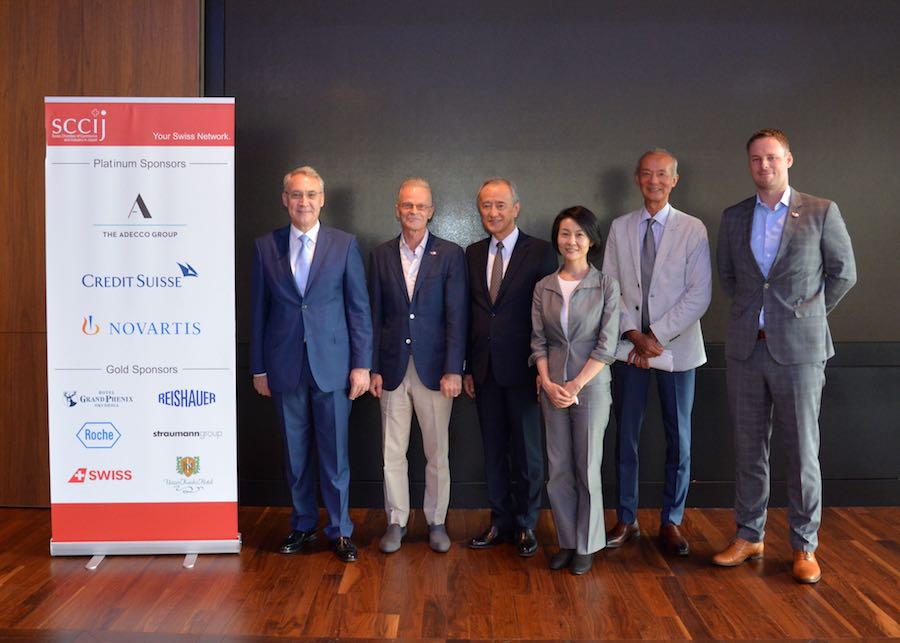 Members and advisors of the SCCIJ Executive Committee with luncheon speaker Jean-François Paroz, Ambassador of Switzerland to Japan (© SCCIJ).

How to foster relations

Regular high-level contacts are required to foster the relations and to improve our image as a partner of Japan, though, he claimed. The strategy followed by the Embassy has consisted of a search of synergies between all stakeholders of the bilateral relations, including the SCCIJ and all Swiss companies present in Japan. “This was my aim during my four years and I think that we have been quite successful.” Many federal councilors and delegations came to Japan. In 2021, the President of the Confederation would come to Japan.

He also lauded the close cooperation of the embassy with the Swiss Chamber of Commerce in Japan and the Swiss business community in Japan. He described the annual “Switzerland – Japan Economic Forum” started in 2018 as an outcome of this cooperation which would help to intensify the bilateral relations. The ambassador also suggested inviting more high-ranking Japanese officials to SCCIJ events to foster relations. At the end of his speech, the ambassador asked the audience to support his successor who is expected to arrive in Japan in October. 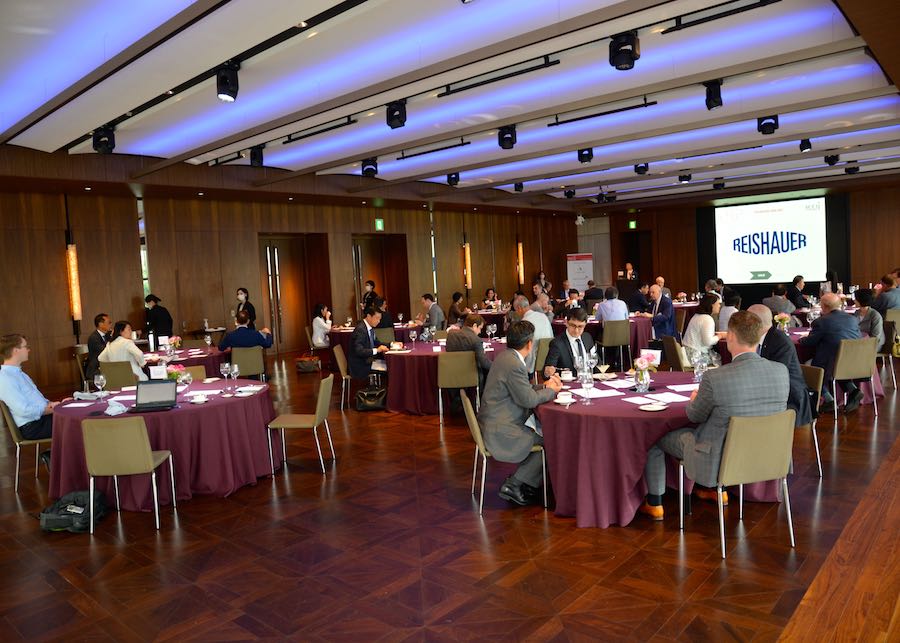 Due to social distancing measures, there were fewer tables in the luncheon room, with four instead of eight people sitting at one table (© SCCIJ).

Mr. Jean-François Paroz was born in 1960 in Moutier, Canton of Bern. He holds a Master’s degree in literature and history (University of Lausanne) and a diploma in international relations (Graduate Institute of International Studies). He joined the Federal Department of Foreign Affairs in 1988. He worked as a diplomatic desk officer for African affairs, as the Swiss Observer Mission to the United Nations in New York, and advisor to the Secretary-General of the Organisation Internationale de la Francophonie in Paris. Later, he was appointed head of the UN Coordination in the Swiss foreign ministry. From 2007 to 2012, he was stationed as Swiss Ambassador to Senegal, Mali, Mauritania, Cape Verde, the Gambia, and Guinea-Bissau. After a four-year mission as the Ambassador of Switzerland to Hungary, he was transferred to Japan to represent the interests of Switzerland in August 2016.