Tokyo (SCCIJ) – Mr. Toshi Matsuda, Head of Investment Promotion at the Swiss Business Hub in Japan, led close to 60 members and guests of the SCCIJ on a discovery journey through the wine worlds of Switzerland. The attendants of the SCCIJ webinar learned about the roots of winemaking in Switzerland, virtually visited the different regions, were introduced to the characteristics of Swiss wine, and even received some tips on pairing. 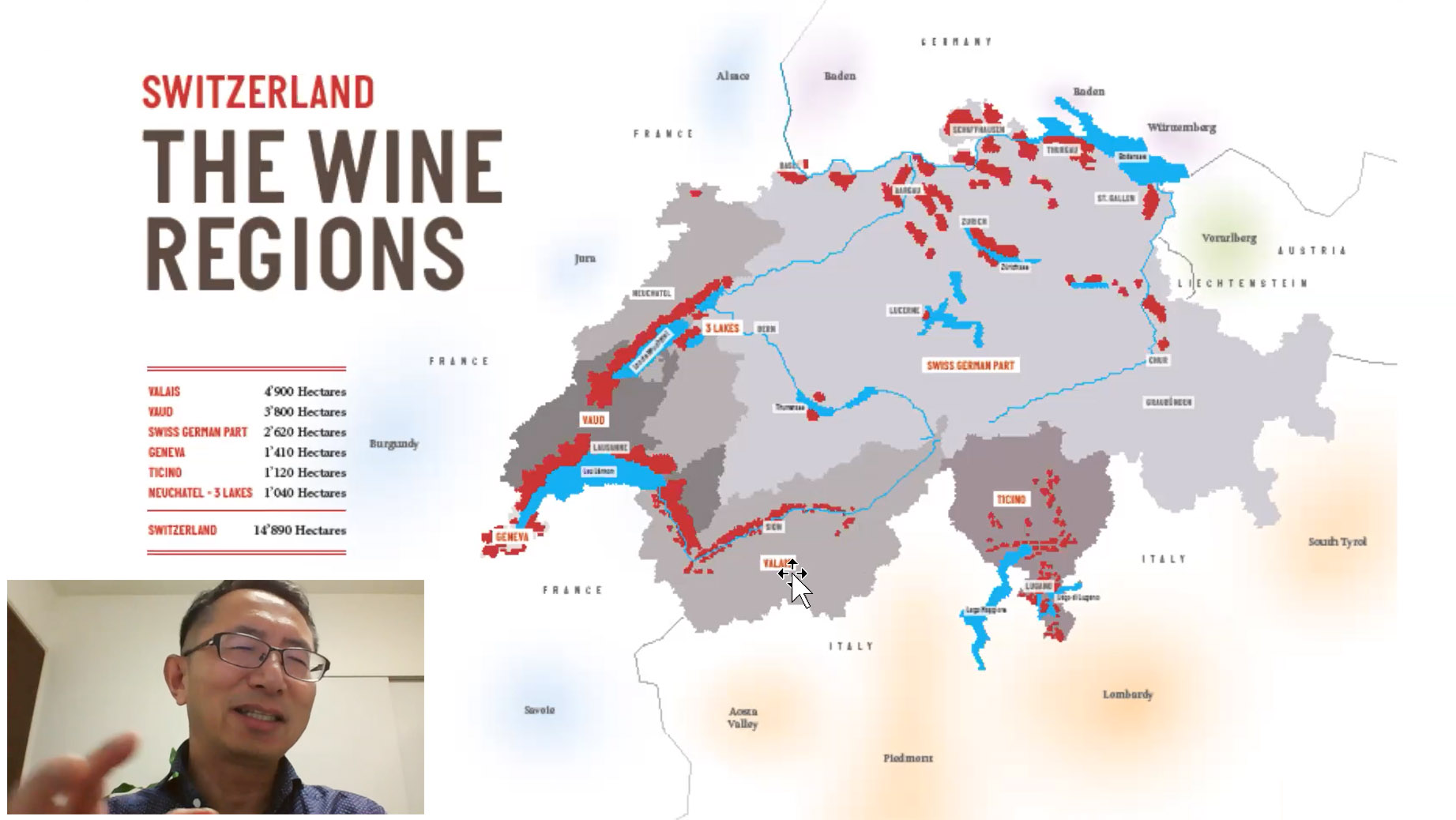 Webinar speaker Toshi Matsuda is an amateur sommelier with a special fondness for all wines from Switzerland (© SCCIJ).

“I am here to tell you how wonderful the Swiss wine is,” Mr. Matsuda started. “Swiss wine is very delicate, flavor intensive, with very long after-flavor, and if you compare it with a cheap one, it is pure with a very deep flavor.” He went on to explain the mystery of why Swiss wine is quite unknown and gave three answers: First, the production amount is very low. The second reason: “The Swiss drink most of the wine themselves,” Mr. Matsuda said.

At 33 liters per capita, the Swiss have the fourth highest consumption of any nation, with high imports and only two percent of its production exported. Finally, the production costs are high which makes the product comparatively expensive, the speaker explained. “Most Swiss vineyards are located in steeps which limits the use of machines,” the speaker said.

The origins of winemaking in Switzerland date back to the Roman invasion which resulted in grape growing in the valleys on the Swiss-Italian border. In the middle ages, Cistercian monks laid the foundation for winemaking in Switzerland. Due to various pests and diseases, all vineyards collapsed in the late 19th century. The canton Ticino uprooted all existing vines and replaced them by merlot grapes. Today’s Swiss wines are 28% pinot noir, 26% Chasselas, 9% Gamay (the original Beaujolais grape), 10% indigènes, 8% Merlot, and 19% allogènes.

Today, the biggest production areas are close to the Italian border, followed by canton Vaud, the German-speaking parts of Switzerland, then Geneva, Ticino, and the Three Lake area. With 1,100 meters, the biggest wine-growing region, the Alpine terroir Valais, features the highest vineyard altitude in Europe, has the longest hour of sunshine, and also benefits from low rainfall. Mr. Matsuda named the “Petite Arvine” by Jean-René Germanier as his favorite wine of this region (imported by Sugiyama Trading).

The speaker described the canton Vaud as the land of Chasselas, in Germany known as Gutedel. His favorite wine of the La Cote area is a Chasselas by La Colombe of Raymond Paccot (imported by Kishimoto Trading) and of the Lavaux area the Chasselas Medinette by Louis Bovard (imported by Club Concierge). “German-speaking Switzerland with its 17 cantons is the land of pinot noir and Muller-Thurgau,” Mr. Matsuda continued, with the pinot noir Aspermont by Vinigma as his recommendation (imported by Helvetica).

The webinar attendants learned more about the other favorite Swiss wines of Mr. Matsuda: Les Perrières from Geneva, Il Mattirolo / Valsangiacomo from Ticino, and Oeil-de-Perdrix by Chateau d’Auvernier (imported by Alco Trade Trust) as well as Auvernier by Domaine de la Maison Carée from Neuchatel. “Swiss wine is excellent to drink anywhere in the world,” the speaker summed up his view. On the one hand, it would even taste better together with Swiss food. On the other hand, Chasselas with its low acidity would match well with Japanese cuisine, for example, sashimi of white fish and umami tasting dashi. “But you best enjoy it with the beautiful scenery of Switzerland,” Mr. Matsuda finished with a smile.

Mr. Toshi Matsuda is the Head of Invest Promotion at the Swiss Business Hub Japan (Embassy of Switzerland in Japan), where he is promoting Japanese companies’ business investment and open innovation in Switzerland. Besides his main function, Mr. Matsuda is also a big fan of Swiss wines and has organized Swiss wine tasting gatherings to introduce excellent Swiss wines to Japanese wine lovers. He has received a Wine Expert certificate from the Japan Sommelier Association and a Level 3 certificate from the Wine and Spirit Education Trust in the UK (Candidate of Level 4 Diploma).